Our first combat took a total of 55 minutes and 5 rounds, averaging about 11 minutes a round. We had 3 PCs, 6 Minion-type characters, and 1 Boss villain, for a total of 10 combatants.

From a combat speed perspective this was not too bad: you had to wait at most 11 minutes before it was your turn again. (By contrast, I’ve played Pathfinder games at higher levels where it took 45 minutes for a turn, so after your character acted, you could play a video game on your phone while you waited for you turn to do something again!) A lot of time was spent discussing the basics of combat since we were all (including the GM) new to the rules.

Our second combat took a total of 43 minutes and 6 rounds, averaging about 7 minutes a round. We had 3 PCs, and 3 reasonably-high powered villains to fight, for a total of 6 combatants.

We were a lot faster this combat. 7 minutes a round is pretty fast, and felt even faster since in between your turns there were opportunities with other players to coordinate team-up moves and such, and so you were mechanically involved in combat even when it wasn’t your turn. I expect if we played a campaign we would get even faster with fewer rules look-ups. Since it isn’t a hit-point based game I don’t think you’d get into the increasingly-slower combat trend that D&D has as you level up, so I expect combat would not get slower over time.

We had a player cheat sheet I created, but we could expand this to include Conditions, Maneuvers, Actions, Ranks & Measures, effects of Fatigue, Dazed, and Staggered as well as  other key information to avoid look-ups in the book during combat.

I also want to add better Attack and Resistance examples to my cheat sheet.

One thing we found was that there was a lot of bookkeeping for the GM to track each opponents statuses (number of toughness penalties, dazed or staggered conditions, etc.).

In our game, even though we didn’t use a grid battlemat (like you’d use in D&D or Pathfinder), having miniatures for relative positioning proved useful. M&M’s Close Range means you’re in Melee (so miniatures are clumped together and adjacent), and Short Range means your miniature isn’t in base contact.

We use what we call Stoplight Damage™ (a trademark of Rogue Comet, my game company) to track Hit Points in games like D&D and Traveller. For M&M, we could do the same thing. Like a stoplight progression, Green is the least negative condition, Yellow is slightly worse, and Red is the most restrictive condition. For M&M, here is what the Green, Yellow, and Red tokens mean:

We like to use Heroclix miniatures which have a 1.5″ base, and standard poker chips which are also conveniently the same 1.5″ size.

The ideal poker chips are ones that have the interlocking radial grooves (here’s an example, or get a bulk lot from eBay) so that when you stack them, the chips and model don’t slide around. 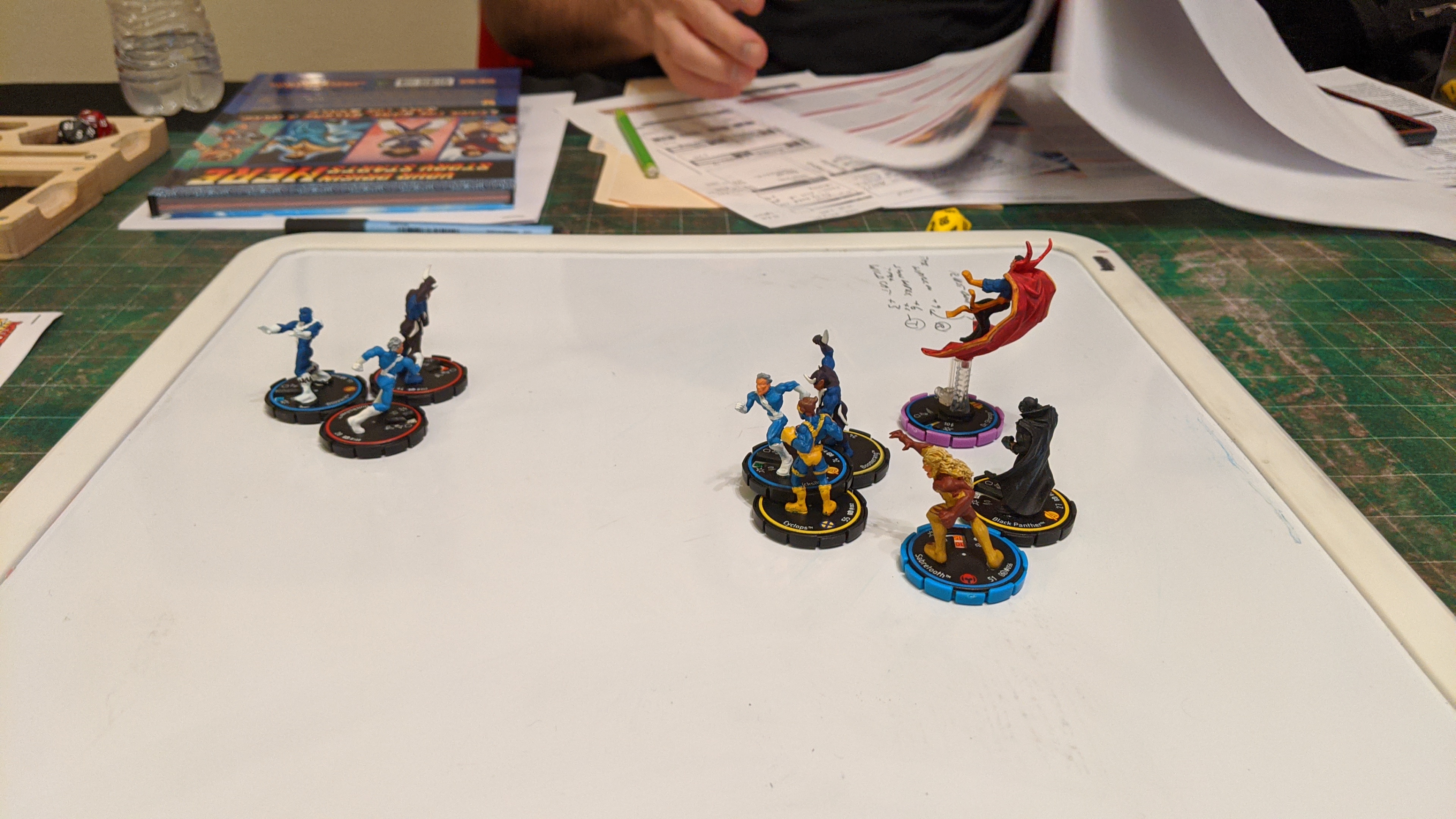 We all loved M&M! It was a great game and ran fast. It is deep, well-balanced, and really matched the GM and play-style of many of our members. As a GM, I would find the math and edge-case rules challenging, but as a player it would really be fun.

M&M is a stable system that is in its 3rd Edition. There are tons of resources, supplements, and fan-created material. The production quality and art are top-of-the-line. To handle the complexities of character creation (if you’re using the Deluxe Hero’s Handbook at least) you can use HeroLab software to manage and verify you are using the point-based rules correctly.

M&M is also mostly under the OGL so you can create fan material easily. There is an online SRD so you could technically play the game without any commercial products. In any case, the free online SRD makes it easy to find and copy/paste rules into homebrewed material or onto your character references.

M&M can also be used for non-Supers games. You could create PL 5 characters and use their Sanity rules to do a Call of Cthulhu game. Or use it to play Jedi in a Star Wars game.

M&M was originally based on the D&D 3.0 d20 OGL rules, and it shows. There are a lot of edge-case rules which means there is a lot of rules to master. This is manageable as a player but as a GM you’ll have to master more rules that in most games our group plays these days. The general consensus is that for a one-shot, M&M has too many rules, but for a campaign, the GM could take the time to master the deep list of rules.

In particular, the point-buy rules to create characters in the Deluxe Hero’s Guide are very complex. I would not attempt it without HeroLab  to double-check my math. On the other hand though, the Basic Hero’s Handbook (which we used last night) has a super-simple, 8 step ‘pick from a list’ set of choices that makes it a breeze to create characters and not deal with the subtleties of the normal Deluxe Hero’s Guide point-buy process.

Although at its core, the system is ‘roll d20 and add modifiers’, there is not a unified, consistent mechanic about base modifiers. For example, the Hazard Resistance Difficulty is Effect Rank + 10 but a Toughness Resistance Check is Damage Rank + 15. Having to know when to add 10, when to add 15, or when to not add a base modifier is a bit confusing at first.

We all loved the game. It’s a bit rules-heavy for my personal tastes were I to GM a campaign (my go-to system is Cortex these days for Supers games), but as a player, it’s just fine. It’s a ‘physics simulator’ where you will look up how much that car weighs to see if your character can lift and throw it, as opposed to a loose story game like Marvel Heroic / Cortex. For many of our players, they prefer the more concrete physics approach, so M&M looks like a great system for our collective GM and player preferences. 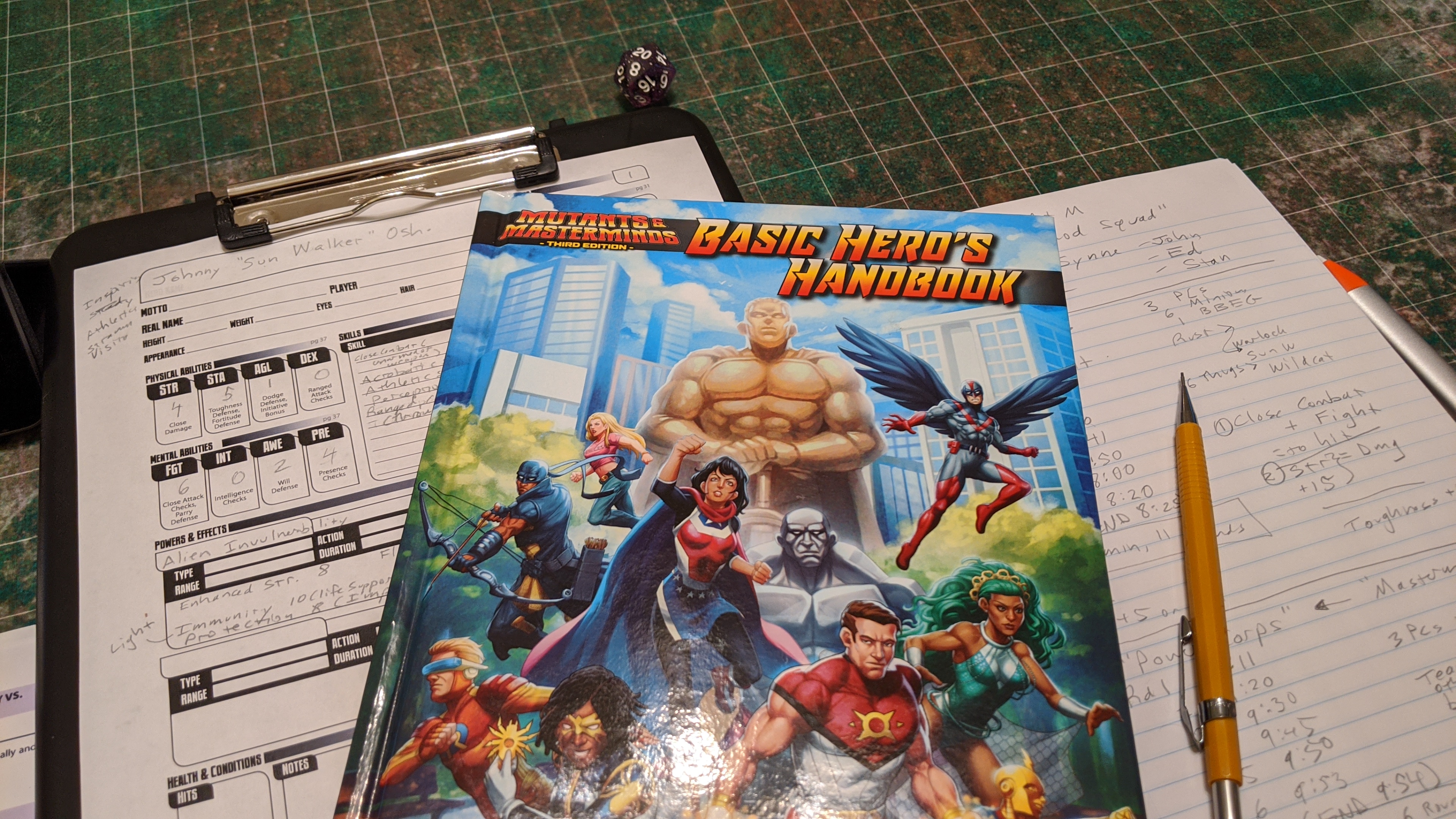