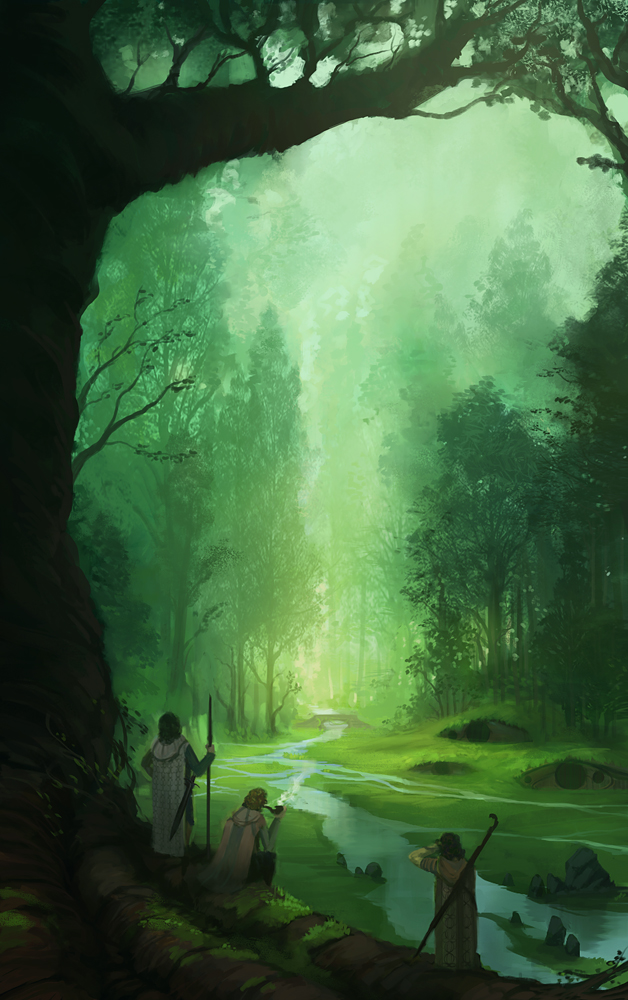 Concerning Hobbits by JJcanvas on DeviantArt

Here are three questions on the Journey rules. which our group had questions on, and which Jon Hodgson from Cubicle 7 graciously clarified on Google+.

1) Do Roles Constrain Who Does Skill Checks?

Question: When you are resolving a Journey Event, can only the character in a given role make checks related to that role?

Let’s say for example you encounter Journey Event #7 where you come across wild game. The text says: “The Hunter must make a Wisdom (Survival) ability check to hunt down this game.” What if other players want to get in on the Hunt?

More generally, do Journey roles require that ONLY the character in a given role (or those in helping roles) make checks related to that role’s responsibilities? Or can anyone make the check?

2) Can The ‘Wanderer’ Fill Roles For Inactive Characters?

Question: Let’s say you have five characters, but three of them have very low Guide/Scout/Hunter/Look-out related skills, and they don’t want to fill in any of the travelling roles.

The Wanderer has a ‘Ways of the Wild’ class feature which reads: “If you act as a company’s Guide on a journey, you are considered to be assuming all vacant travelling roles (you are considered to ‘fill in’ as the company’s Hunter, Scout and Look-out at the same time, if no other companion is already covering that role).”

Can the Wanderer fill in for these multiple vacant roles, since players have opted not to fill them? Or do all players have to take on a role, whether they want to or not?

Answer: “Player-Heroes generally can’t sit out roles and do nothing on a journey. Again, if the Loremaster felt it was appropriate for a good reason then perhaps they could allow it, but it smells remarkably fishy to me! What are the inactive Player-heroes doing in that time? Simply walking, eyes down, incapable or unwilling to choose a route, pick a campsite, find water or catch food? It’s up to an individual Loremaster to rule on, because a case could be made using Aragorn and the Hobbits as an example of a Wanderer handling everything. But even then, the Hobbits cooked! More a spirit of the rules issue than a hard and fast rule.

If it were my game (and this is a purely personal approach) and I had a player insistent they would not help the others on the journey, I’d consider giving them some Shadow, or making them have to mechanically test their resolve to sit out every activity needed to survive in the wild.

Journey events create a lot of atmosphere and Middle-earth “feel”, and “failing” at them can often add a lot of fun as well as story. If players really don’t want to join in with that, it’s possible to simply not use the Journey rules at all. And that will suit some groups more.” — John hodgson, Cubicle 7

Question: If you have a journey event and gain a level of exhaustion, can you remove that exhaustion per the normal long rest rules in D&D 5e?

For example, the party undertakes a Short Journey of 150 miles. By foot that’s going to take over a week’s time.

p. 176 makes it clear that by default you don’t track exact time and distance when using the Journey rules.

Let’s say you have only 1 event during the journey (event #7), on which the character fails a Intelligence (Investigation) check on Journey Event #7 and suffer a level of exhaustion. Narratively, this might take place mid-journey, which gives you three more days till arrival.

Finishing a long rest reduces a creature’s exhaustion level by 1, provided that the creature has also ingested some food and drink.

So by default in ‘Adventures in Middle-earth’, are you supposed to not track time, and therefore ignore the normal nightly recovery of 1 level of exhaustion?

Answer: “Journeys do indeed ignore long rests and no long rests can be taken on the road unless a journey event gives them (or functionally something like them). This is made a lot more clear in the Loremaster’s Guide, which ha slots of advice on running Journeys.

Again, it’s up to the Loremaster to judge if their game would be more fun if a battered and bruised company were allowed to find a resting place for a night. Or if they should be pushed to breaking point by the Journey. But the company also has to plan carefully when they use their powers, and when to call it quits and end a journey early in order to get a good rest. There’s intentionally an inherent gamble in Journeys.

Thanks for your questions – they’re really helpful in helping us check how well we communicated those rules!” — John hodgson, Cubicle 7

Here is a comment from Luke on the forums about using gritty recovery rules.

“This hasn’t been confirmed yet, but expect to see it in the LMG. For now, I would assume that exhaustion gained on the road can only be recovered at journey’s end or at a place of rest along the way (like an inn, but not a camp site).

There is also a speculation that the default recovery rules for AME will be the gritty recovery rules in the DMG. This would mean a long rest would be 7 days rest and not just 8 hours sleep.”