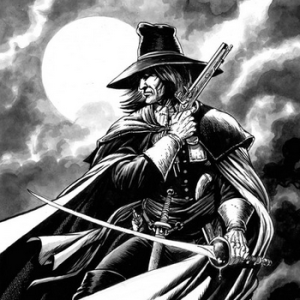 In the year of our Lord 1587, from Salem sailed forth the Puritan know as Mordecai Boone. The Massachusetts-born man had never ventured from his homeland before, but his conscious compelled him. Recent word from his distant cousin Solomon Kane came, bearing tidings which even now furrowed Boone’s brow. While sharing love of God and hatred of evil, the wandering Solomon Kane wrote warnings of a dark and looming. Kane bid Boone make haste to join him in England where they might together bind forces to thwart the growing shadow.

Boone heeded the call, but more from concern of Kane’s dalliance with magical forces than from believing Kane’s crazed ramblings of eldritch forces surely born from a broken mind. Boone had it in mind to pull Kane from the error of his ways — to eschew having any further concourse with magic, for such dabblings were clearly forbidden by their shared faith. Surely Boone’s landing in London would usher in Kane’s return to the sane world of the Puritans, right?

Wrong. Boone never laid eyes on fair London, for his ship encountered a mysterious spirit resembling a crying girl who drew them into a fierce storm. When they emerged, they found themselves in the white capped squalls of the Devil’s Cross!

After having entered the alien and cursed world of Caribdus, the ensuing storm crushed Boone’s vessel into splinters. Among green debris, jutting timbers, and the bloated corpses of things that weren’t quite human, Boone survived by clinging desperately to a barrel. He and other survivors were picked up by scavengers who later sold Boone as a slave to the pirate captain Cragtooth Targ.

Seven years of dread service passed aboard the The Crimson Squid, and Boone endured the cruel task-masters whip through gritted teeth and narrow, smoldering eyes. His salvation from Cragtooh Targ came months after the ship took another slave — the Wind Mage Kinkaid. Kinkaid’s daughter was held captive in his home city — her life was spared only if he took service under Cragtooth Targ. In time Kinkaid taught Boone the ways of a Wind Mage and found that Boone (though reluctant) had a natural talent for magic. In time Kinkaid allied with Boone to escape the clutches of Cragtooth Targ and steal away to Kinkaid’s hometown to rescue Kinkaid’s daughter Alaria before Cragtooth’s minions could intervene. Unfortunately, they arrived only to discover Alaria had been sacrificed in a dark and pagan ritual of Blood Magic. Kinkaid went mad and left for a life of solitude in his grief. Boone vowed an oath to wage war against the forces of evil, and in particular to thwart all uses of Blood Magic.

Now, finally free after eight years on Caribdus, Mordecai Boone roams the world. He sometimes takes work as a Ship’s Mage while he works to further his mastery of magic.