ShinnCon is an all-day Saturday game-a-thon which runs every 2-3 months. The game group is capped at 8 players plus a GM. At the moment, the favored game systems and adventures for this group are OSR style systems such as Traveller, Star Frontiers or D&D 5e conversions of classic 1e adventure modules. We’re starting with a Traveller campaign.

I (Stan) go to several cons a year and spend 12+ hours a day gaming over 1 or 2 days. Thing that is a bit of a let down is that most folks are strangers, not all players are pleasant to play with, GM quality varies, and there is little or no continuity in characters or campaigns. Basically what I really want to do is run or play in RPGs like I did as a kid where I’d play all day with guys I know, there would be continuity of characters, and we’d actually finish adventures.

So my idea with ‘ShinnCon’ is to take that time I’d spend at a con and have a full game day, but limited to one game table, hosted at my house. Many of the shorter old-school modules (be it 1e or Star Frontiers or whatever) you can run, start to finish, in about 6 to 12 hours. What I’m hoping for is that each ‘ShinnCon’ would have at its core a module (typically old-school modules for now) which we’d start and finish in one day. In some cases it might take a couple of cons/game-days to finish a module. Ideally the GM (me for now) would have a 6-9 hour adventure planned, with an optional pick-up game at the end, perhaps with a different setting & system. Running pickup games can test to make sure a system is popular with the group before committing to running it for a campaign.

So it could be that the next 2 years might look like this, with ShinnCon’s every 3 months (or even bi-monthly or monthly at some point if there was interest and I had time):

I am thinking of something like the West Marches campaign framework (see http://arsludi.lamemage.com/index.php/78/grand-experiments-west-marches/). Basically we’d have a pool of about
10 great players, run these game days when most can make it, and end up with 5-8 players on any given game day. If we have some folks who really dig Traveller and Star Frontiers, but have no interest in D&D or other systems, we’d keep them on the game list and they could bow out and rejoin when the games rolled back to something that fits with their interest. 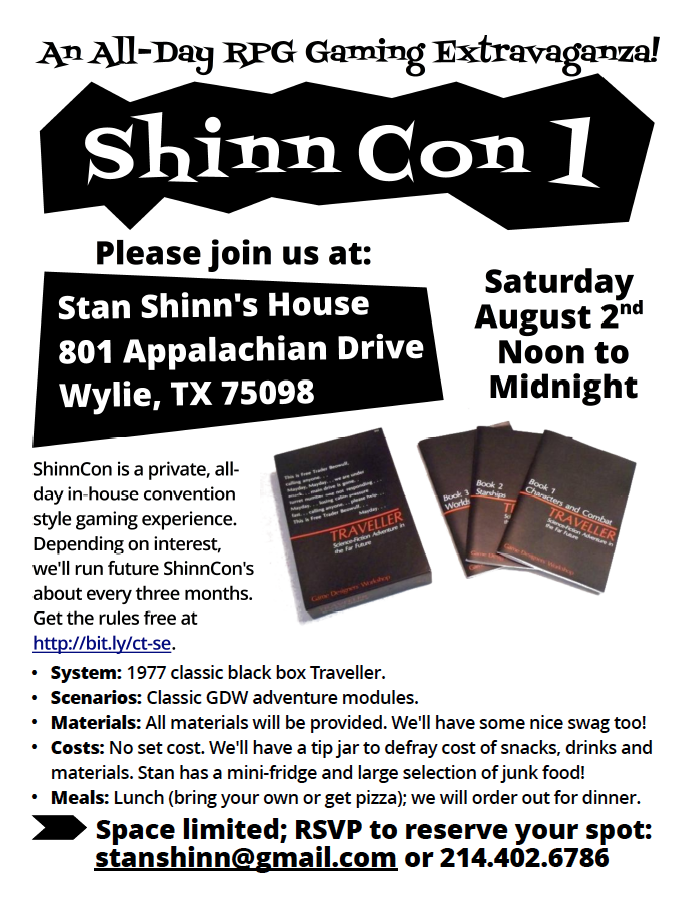