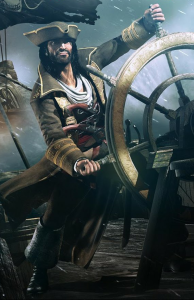 Liam McCormic was born the son of Reverend William McCormic, an Anglican clergyman,  and his wife Catherine.  With both a grandfather and father who served as Anglican clergymen, Liam’s future as the same seemed fairly secure.  Even more so when his father accepted the position of rector at Kirkcaldy.  Liam possessed to great an adventurous spirit for the life of a clergyman, however.  From an early age, his heart and mind were always set on the distant horizon.  In fact, his most fond childhood memories are of the times his maternal uncle, then lieutenant Maurice Suckling of the Royal Navy, would visit.  Hearing these stories turned his dreams and imagination into deep passion and desire.  Before the age of 10, Liam was determined that he too would be a naval officer.  So it came as no real surprise that in 1762 shortly after his 12th birthday Liam’s uncle, now Master and Commander Suckling, happily offered Edmund a posting as one of his assistants.

During a stay at the ports in Boston during the summer of 1765, Liam’s life was changed.  Something about the culture and the possibilities of life in the colonies took hold of his heart and refused to let go.  In his mind, there was no better life than what the colonies offered.  It took three more years before he would finally have put aside enough to get a place in the colonies and start anew.  He moved to Boston and spent some time working with expeditions to the frontier.  While he enjoyed the work, he was ill suited to the task.  Survival in the wilderness was just to different to survival on the open sea.  Plus, he was a bit to brusque when it came to dealing with the Indians.  After returning to Boston, he met Jane Lewis.  The two fell in love rather quickly and where married in 1770.

He really hit it off with Jane’s uncle, George Washington, and as a result began to become more involved in the growing political fervor.  When the war for independence finally kicked off, Liam was so utterly convinced of the superiority of the American way of life that he offered his services to the newly formed Continental Navy.  His experience and connection to Washington garnered him the position of Master and Commander of the USS Hampton.  He quickly became one of the go-to men for blockade running.  In 1778, during what would turn out to be his last action for the Continental Navy, he broke through a blockade during the night and was chased for several days by a British sloop-of-war.  During the chase, he was forced to set out to sea to finally lose his pursuers.  Making their way back, they encountered a very strange phenomenon.  From the distance, they could hear the sound of a crying girl.  With a storm brewing, Liam changed course in hopes of rescuing this lost girl.  She was never found.  Instead, the storm came upon them suddenly and proved more violent than it first appeared.  By the time it was over, the ship was listing badly.  With much of the crew missing or dead, they were taking on water faster than they could make repairs.  The USS Hampton was sinking fast.  Fortunately, there was an island in the distance.

By the time Liam made it to the shore, the few remnants of his crew from the storm had shrank even more.  Many drowned during the swim.  Others were pulled under by some unknown creature.  Of the four that made it, only Liam and Able Seaman Henderson would survive to be rescued by a ship collecting salvage on the edge of the Flotsam Sea.  Up until now, he had some questions about where he was.  After all, the stars were entirely different.  But there was no denying it now.  The ship was captained by some kind of giant crab, Captain Weavas.  After the initial shock of it all passed, Liam came to terms with it fairly easily.  For him, this strange new world was full of unimaginable things waiting to satiate his curiosity.

Being such a capable sailor, he was quickly accepted by the crew and decided to stay on for a while.  It would have worked out if not for his constant head butting with Captain Weavas, who was a very harsh task master.  When the first mate convinced some of the crew to mutiny, Liam signed up.  Unfortunately, it didn’t go quite as planned.  During the fighting, a fire broke out below decks and made its way to the powder magazine.  The explosion ripped the ship apart and Liam found himself adrift yet again.  He was eventually picked up along with some other survivors, including Captain Weavas.  If not for his condition, Weavas would have surely killed Liam the moment he laid eyes on him.  Fortunately, though, Liam managed to secure a job on the Rebecca shortly after they made port and got away from Weavas before he had his vengeance.

Now,  after almost a year aboard the Rebecca, he’s earned the position of First Mate and has settled into this new world and life rather nicely.