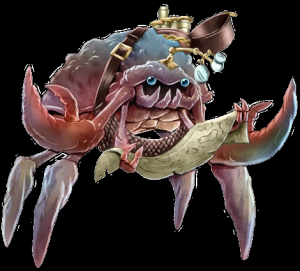 Brachus was welcomed into “The Family” at a young age. As Scurillians are exceedingly rare, he had to find “family” outside of the confines of his species. While he certainly didn’t “need” others, there were needs, and wants, that were best acquired with the help of others, so he knew he couldn’t go it alone.

Brachus’ valuable skills in accounting, coupled with his persuasive personality, and a mean streak that can send chills into the coldest of heart, he knew that his merchant clan was the best he was going to get. Over time, he started to fit in, and actually become a valuable member of the team. He had more money than he could ask for (but certainly less than he needed) and the job was fun… except for the seasickness. He desperately needed to find that damned Kraken Mage and have them lift that curse… a sea merchant with seasickness? Gods of mercy.

The day that forever altered Brachus’ path started like any other day. “The Family” of traders and merchants, known as “Flotsom Sea Exports and Imports” were securing deals, lining up transport, and selling the last bit of goods when he heard a commotion near their main transport. By the time he arrived, they were gone… dead. Every one of them.

As he tried to collect himself and piece together what had happened, the thought struck him like a club to the thorax… “The money! The cargo! Where is it?” Brachus searched the ship and discovered that there wasn’t a dime to be found… the murderers had made off with all of it. Worse yet, all of the shipments and had been stamped and sent on to their destinations. Without manifests, he had no idea where each shipment was headed… he was penniless!

Surveying the situation once more, Brachus realized that he had to leave… and fast. He would easily be the number 1 suspect, if he was found there alone, and he certainly couldn’t sail the ship by himself. No matter, it was useless without the rest of “FSEI”.

Brachus gathered his gear, most importantly his Super Brand… it was the one item that could help him recoup his losses, and make him money down the road. Without it, he would lose his Super “Tattoo” after his next molting cycle. Furthermore, he’d need help reapplying the brand… he did need help, and that help would require him to make some guarantees. It looked like Brachus was not only broke… in order to survive, he was going to need to go into debt to get out of this mess. That lost cargo was his only hope. He needed to find out where it went so he could use his Super Tattoo to collect the funds that were rightfully his.

This would become his life’s work.