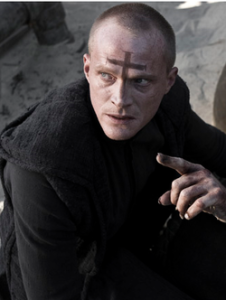 Rodrigo was born to parents Gonzalo and Maria in the merchant’s quarter of old Valencia.  Rodrigo was taught the Cobbler’s profession in anticipation of that being his life’s work, as it was his father, and his father’s father before him. But being a shoemaker was not Rodrigo’s first passion, oh no.  He loved the mystical, the otherworldly, and yearned to know more about all things.  Aiding in this learning was his Abuela, his grandmother, Maria Louisa Sanchez, his mother’s mother (who had also delivered him, which btw, had occurred during a fantastical sea storm that had blown off of the ocean just as his mother was giving birth).

Rodrigo’s Abuela fed Rodrigo’s voracious appetite, giving him the works of Maimonides, Ibn Arabi, as well as the Greek and Latin classics. Little did Rodrigo know, but his Abuela was a Murrano, a crypto-jew, hiding as a catholic to escape the Inquisition and the persecution of the Jews in Spain.  Although she never revealed her secret to her grandson, she hoped that by making him a learned man and well rounded, she could win a victory in her own bloodline.

As Rodrigo grew older, he chafed at the small horizon’s of being a cobbler, and fled one day to join a travelling group of priests who were travelling to Rome to petition for a new order.  this group, led by Ignatius Loyaola, was to become the Jesuits (1540).  Rodrigo at first was not a brother of the order, but just a helper, and handy man.  He used his skills to fix the shoes of the first six Jesuits, and quickly earned the nickname of “The Cobbler.”  He studied, lived a simple life, and aspired to become a brother of the order.  Finally, at age 30, he was ordained, and ushered into the order of the Companie de Christos. He was one of the first sixty men to join the order, so he is given the sobriquet of a “Sesenta.”

Father Rodrigo was sent back to Spain to help advise in the Inquisition, which was picking up speed at the time.  The Dominican order took to the Inquisition, but the Jesuits advised and helped, especially in propaganda and “messaging.”  Father Rodrigo despised the inquisition, as his Abuela had hoped, and secretly began working against this reign of terror.  He would liberate prisoners when he could, and helped warn people of their upcoming arrest, all the while avoiding detection himself.  He did this for four years, while at the same time lobbying his superiors to officially resist the Inquisition and bring and end to the terrors.

And he succeeded.  The order was to officially request of the pope in Rome that the Inquisition cease.  Father Rodrigo was the natural advocate for this petition, and was order to Rome with an official petition signed by his superiors to request an end to the Inquisition. But just as he was about to leave,  a group of inquisitors came in with a group that they had arrested.  Among this group was his old, frail Abuela. (of course).

When Rodrigo had a moment, he came to her cell to talk to her.  He started the conversation, but she cursed him, saying that he was the disappointment of her life.  Her prize, her grandson had become a part of the very institution that she had dreaded and fought against the most.  It was as if Rodrigo had arrested her himself.  He dared not reveal to her his extra curricular activities, as the cell walls had many ears, but he begged her to forgive him.  She would not.  Instead, she bade him to depart, and as he turned to go, she cursed him with an ancient and powerful curse, saying that he would never achieve his victory in this world, but, just before arriving at his victory, his destination, he would be forever diverted on his path, until he did right and made things right. He left crushed, but knew that if he could just get to Rome, with the petition, he could yet save her.

So he boarded a merchant vessel to Rome, and prayed the ship would be fast and the winds with her.  And they were.  In a fortnight, the spires of Ostia were in sight. he might yet save her.  Before the ship could enter the port, another ship, a man of war, sided with the vessel, and commanded it to join her and not outfit for war.  It was impounded by the Christian league to fight the Turks off of Achaea, in a little gulf known as Lepanto.  Rodrigo tried to get off the vessel, but the Captain drafted every able bodied man to fight (not caring that Rodrigo was a man of the cloth), and Rodrigo, despite being a priest, was given a cannon to command.

The sea battle was the largest naval engagement in history up to that time, was a close run affair, with the Christian League prevailing.  Rodrigo acquitted himself well, never shirking a task, and never fleeing battle, including several boarding attempts by the Turks.

His merchant vessel started to head back to Rome with many other vessels, and although he had lost so much time, he thought he may yet be able to get an audience with the Pope.  His small ship gained an escort of five other ships, which Rodrigo thought was strange, until he saw the Captain of one of the other vessels, who had been the same captain who had impounded their ship outside Ostia, was also leading the escort.  Before Rodrigo could warn his Captain, the other five ships started firing on the tiny merchant vessel.  At point blank range.  The volleys were ferocious and severe, and the tiny merchant vessel went down quickly, dragging Rodrigo down with it.  He struggled and struggled, then, at the last, made piece with his fate.  His Abuela’s curse had won out.  He would be denied his victory, preventing him from saving her. Then there was a light, and down became up. And then he washed ashore on a strange land.  With the Petition still in his vest…