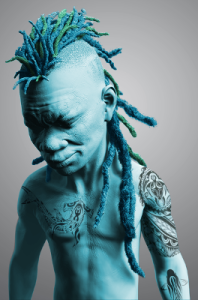 Actually his father’s name was Dax – his own name, Puk, is all but forgotten. Puk’s father and mother were looked to as leaders in their village, and gathered and organized their community when the floods forced the Doreen back to their ancestral islands.  At 12 years old, Puk was proud that he was finally old enough to be at his father’s side helping with important jobs during the evacuation.

When the rising waters forced the Doreen to abandon their ancestral home, Puk’s parents made sure none in their herd was left behind. “The Long Swim” took its toll on the elderly and the weak, but they fought a losing battle to keep the group together even while the stronger swimmers pushed ahead to save themselves from drowning or being eaten by predators. In the dead of night surrounded by nothing but water, their dwindling group was ravaged by something Puk had only seen in his worst nightmares. He led his young sisters and what was left of the herd away from the creature while his parents bravely fought for their escape. His father finally returned with a few survivors, but sadly his mother did not.

Puk’s nightmare only continued when they finally reached land among the Kehana. His father and sisters were killed by the Kehana. Puk was the only one of his herd to reach refuge on Sprith and he found himself alone even among his own people. Most only knew him as the son of Dax.

He took the name Daxson to honor the memory of his fallen hero and left Sprith to find his own place in the world. He found work doing jobs that others were unwilling or unable to do as a deep sea diver for a salvage ship owned by Captain Weavas. He faired well under the harsh captain because he worked hard, didn’t cause problems, and did his job well. Because of his quiet nature he was mostly overlooked as a simpleton by the crew, but he was too busy observing and taking in everything he could about every job performed on the ship. One day he would be the captain of his own ship and he would restore the great heritage of his people.

While working for Captain Weavas he encountered two shipwreck survivors – Liam McCormic and Able Seaman Henderson. During their time on the ship Liam became the closest thing Daxson had ever had to a friend. He found him to be skilled and capable but also arrogant and abrasive. While Daxson had no love for Captain Weavas, he was opposed to the mutiny plan and blames Liam for blowing up the ship. They parted ways after that.

Currently Daxson contracts for independent salvage jobs sometimes going alone or employing a small crew with hopes to scrabble together enough coin to buy his own ship.