Some one-shots and mini-campaigns I’d like to run on the actual play podcast at some point. — Stan

The Secrets of Cats (Fate Core) 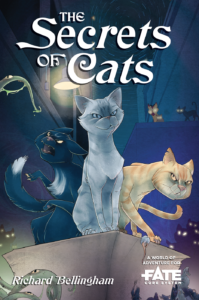 Cats are magical; cats understand sacrifice and the power of names.

A decapitated mouse left on the doorstep or pillow is a powerful ward, and a spell wailed by the cat chorus confers even greater protection. When evil is on the rise and the safety of the neighbourhood is at stake the Parliament of Cats is there to stand firm against the darkness.

Take Silver Ford, for example, a sleepy tourist town near a played-out old silver mine. When kids messing around in the mine accidentally rouse an ancient evil on All Hallows’ Eve, the secret and magical cats of the neighborhood are the only thing protecting their special people from the things that go bump in the night. 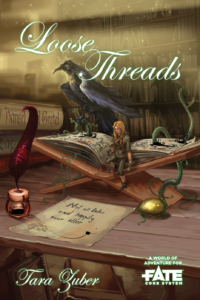 On the edges of fairy tales live members of the Company—collateral damage from someone else’s Happily Ever After.

Maybe their fairy godmother got lost on the way, or they failed to solve the riddle, or their siblings forgot to save them before riding off into the sunset. Now Company members live on the edges of tales and travel the In-Betweens, helping others like them who need rescuing from ogres, reversing of curses, and freedom from the evil clutches of bandits. People who the stories have forgotten. It’s difficult work, and every story must end eventually.

How will yours turn out? 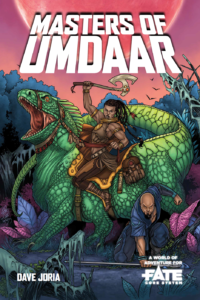 Rise up against the Masters of Umdaar!

Behold the fallen world of Umdaar, home to savage warriors, cyborg insects, and merciless warlords. Oh, and lasers—lots and lots of lasers. The Masters rule with an iron fist, and the people’s only hope are the archaeonauts and their quest for long-lost artifacts of power. But will the Masters get there first? Masters of Umdaar, our latest Fate World of Adventure by Dave Joria, is a retro tribute to such shiny serials as John Carter of Mars, Flash Gordon, He-Man, and Thundercats. 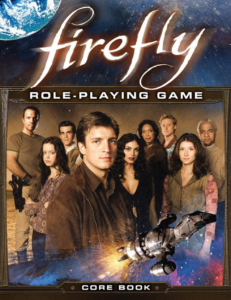 Keep Flyin’! Prepare for thrilling, new adventures in the ‘Verse with the Firefly Roleplaying Game! Set six years after the Unification War, the Firefly Roleplaying Game faithfully branches story elements from the popular FOX television series, while simultaneously expanding on the Firefly setting. Powered by the Cortex Plus system, which emphasizes character interaction and story development, this core rulebook features everything you need to venture into the black, including character archetypes, ship stats and creation rules, locations and planetary systems, a detailed Episode guide, story hooks, and more.

In our campaign, we’ll pick up where Mal and his surviving crew have started a rebellion against the Alliance and now have their HQ aboard a captured Alliance vessel. Your crew has taken over the Serenity and now take various odd jobs between helping out (as best you can) the burgeoning rebellion. 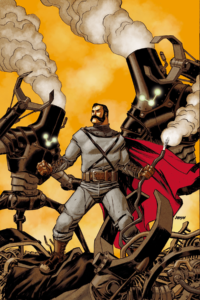