Last week we finished session 42. At the beginning of session 45 you’ll be 10th Level! I’m committed to getting you to level 20, and we’re half way there. Since this is roughly the half-way mark of the campaign, I’d like to suggest the following changes in focus, some new add-on rules, and a new way of leveling. We will discuss this week and firm up how the second half of the campaign will work.

Levels 1-10 had a big focus on ‘can I live through these adventures?’ and ‘can I acquire wealth, magic, and knowledge?’. At this point you’re all rich and hard to kill. Although there will be a continued chance of death, as we slide into the end game of levels 11-20, I think the focus will shift to ‘can I effect the people and places I want to impact?’ and ‘can I accomplish my goals to shape the world?’

Matt Colville’s ‘Strongholds & Streaming’ book won’t be out in hard copy till February of next year (possibly later if there are more delays). Only one player mentioned kingdom-building / stronghold rules as part of they want to do. I’m inclined to allow holdings to be a more narrative aspect of our game and not get into rules (although we could adapt the Adventures in Middle-earth rules for holdings in the Mirkwood Campaign if we did want formal rules). Next time we do a D&D campaign with a strongholds focus we can start with the strongholds rules at the beginning and then craft the campaign structures around those goals (which probably has you staying local with less globe-trotting and plane-hopping). 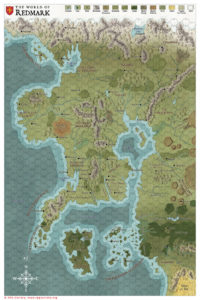 I do foresee mass battles with 1,000’s of combatants being part of the future in our story, so look for rules on this to come. I’m thinking it’s something similar to my Traveller ship combat rules where characters have an abstracted impact on a game run with miniatures (or tokens), with the option to ‘zoom in’ and do character combat for an additional effect on the overall battle. Stay tuned for rules on this front!

Finally, with all the above in mind, I suggest that once we hit Level 10 we shift to what I’ll call ‘Legacy Leveling’. This is inspired by Adventures in Middle-earth and would work like this:

With this Legacy Leveling structure, at session 75 you’ll be at 20th Level. That puts our campaign coming to an end around the end of 2019, having run a total of about 3 calendar years of gaming.