I’ve been doing a bit of reading on DC Heroes and its history and also reading up on Mutants and Masterminds (aka M&M, which is the generic version of Green Ronin’s ‘DC Adventures’; it’s the same system, but one has the DC characters and the other doesn’t). Based on forum posts and reading through the rules (and having played M&M 2e several years ago, but not having played DC Heroes), here’s my observations on the two systems.

Green Ronin is the same company that does Fantasy Age and Dragon Age and their art and products are top notch.

Both DC Heroes and DC Adventures / M&M have gone through 3 editions.

DC Heroes is out of print with no retroclones. DC Adventures / M&M is still in print. 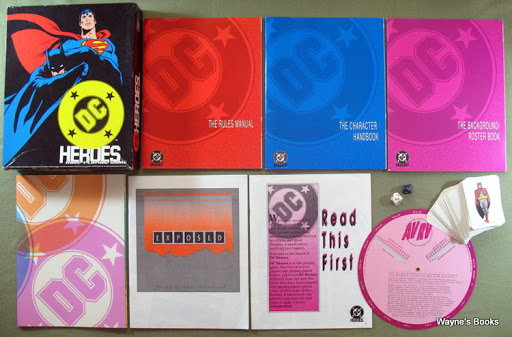 As I understand it, DC Heroes has Hero Points, and often a lot of them, where both sides can spend points to reroll multiple times, getting you into a Savage Worlds style benny/soak cycle which can really chew up time.

DC Heroes has two charts (or alternatively a combat-dial tool) which you have to use on just about every roll, which can slow things down.

DC Adventures / M&M is inspired by D&D 3.0 and many characters may make extensive use of Feats (renamed to ‘Advantages’ in 3e). An NPC with a ton of powers and ton of Advantages/Feats can be a challenge to run as a GM (although as a GM I might ignore many of the feats, just concentrating on 2 or 4 of them).

I think you’d need to play each system for a few games to comment definitely on combat speed between the two systems, but having read many times online that DC Adventures / M&M plays faster, I’m tempted to believe M&M is faster.

I’m not aware of any such digital tools for DC Heroes.

DC Adventures / M&M has an online SRD and much of M&M is released as OGL content, with tons of third party support and fan creations.

DC Heroes doesn’t have an SRD but does have several fan communities.

There were dozens of products for the DC Heroes line, all out of print.

There are about 150 products for M&M / DC Adventures available from Green Ronin.

DC Heroes is expensive on the secondary market (books or the box set run $70 to $200 for a one-person set).

DC Adventures / M&M is in print and has several options as a core Players Guide:

Mutants & Masterminds Deluxe Hero’s Handbook is much closer to Champions in terms of being complex for newcomers and taking a while to build custom characters.

Character creation in Mutants & Masterminds: Basic Hero’s Handbook on the other hand is streamlined and much more like creating a Fate character where you pick archetypes and can quickly roll up a character (but results in characters compatible with the main system). M&M Basic doesn’t have a point buy system; you select from 8 sets of choices and you’re done!

I’m not sure I can comment on how hard or easy it is to create characters in DC Heroes.

Given the D20 / D&D roots of M&M and the D&D experience of our game group, I think the Mutants & Masterminds: Basic Hero’s Handbook is probably easier to ramp up on vs. DC Heroes (although for long-term play, maybe ease-to-learn isn’t as important).

I have heard that M&M 3e significantly streamlines the system. I’m not sure what exactly changed but I suspect that if you played M&M 1e or 2e, you probably should give M&M 3e a shot before judging it based on earlier editions.

However, since playing DCA now for a bit and being the HUGE Steve Kenson/M&M fan I am, I can honestly say that imho DC Adventures is quite simply the greatest superhero RPG of all time.” Source

“I can relate to where you’re at with DCA. I played Champions for nearly 25 years before switching to M&M; and my players were all 20+ year Champions vets too. It took a lot of patience to get them to switch to M&M 2e but eventually they all preferred it for supers games over Champs. It was just a question of hanging with it long enough to accept the differences.” Source

“The M&M Powers system is the DC Heroes/MEGS/Blood of Heroes Powers system (some of the powers text is almost identical). So if you liked the way DC Heroes builds Powers, then you’ll enjoy M&M – perhaps the more so because a lot of the weird costing structure from DC has been simplified.

M&M plays much, much faster than DC Heroes because you don’t have to do double table-lookups for every action – that’s a game pace killer. On the other hand, you don’t have the elegance of the logarithmic AP system either. IMO this is one of M&M’s weaknesses; simple integer math, usually in less than two digits, can tell you exactly what your PCs can do in any situation. M&M requires more fiddly calculations for that.

M&M handles Gadgets/Devices much better than DC did, in the sense that they work the way they do in comics much more so than in DC, and have fewer exception clauses.

In most ways, I’d say that the underlying design of DC Heroes is superior to M&M (The 3×3 Attribute grid, AP measurements, etc) but it’s fatally flawed by its core action resolution mechanic, which just takes up too much table time. M&M may be a bit messier and less elegant, but it plays faster and more fun for me, which is why I switched.” Source

From my personal GM style, I think the easiest story-RPG which I’ve played and run is a Cortex RPG superheroes game such as Smallville or Marvel Heroic RPG.

However, for more traditional ‘physics’ based games, DC Heroes and DC Adventures / M&M both seem like good choices.

There is also speculation on the DC forums that DC will reprint the DC Heroes RPG to tie into their new actual-play video series of RPG games; if that happens DC Heroes will be a more attractive system.

As a player, I’m sure I’d be happy to play either of these systems. As a GM, given my history of d20 games, I suspect I’d find M&M easier to run than DC Heroes.

I hope I can play in both these games soon though to see how combat feels. Ultimately, this is the best test of the system — is combat fun and relatively fast?