Finding poker chips in a 1″ size can be a challenge. Here are the two suppliers I’ve used in the past. 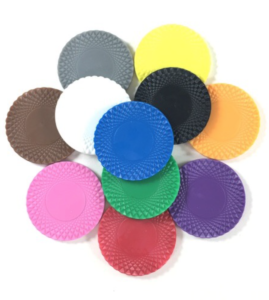 Both the above suppliers sell their 1″ poker chips in various colors. The chips are reticulated with radial lines that let them easily stack and interlock but not slide around once stacked.

You can also use various 1″ plastic chips such as these but they might slip around under the model. You might try using some fine grained sandpaper to score the surface and give them a bit of friction.

If you’re wondering how Stoplight Damage™ works, see my text below adapted from my Kickstarter description.

These special plastic tokens are sized to fit under standard 1 inch miniature bases and allow you to use Stoplight Damage™ rules to use tokens to track hit points. Run large scale encounters without the hassle of tracking hit points for each creature by hand.

Ever have a dozen Orcs on the battlemat, and have trouble keeping track of each creature’s hit points? Logistics of tracking a large number of minis can be challenging. Damage Counters make this easy.

Any damage done to Player Characters is tracked like you normally do: players track their individual damage levels. Damage dealt to non-player creatures and enemy creatures uses Stoplight Damage™.

Here’s how it works. There are green, yellow, and red damage tokens. Like a stoplight, the most favorable color is green, and the most unfavorable is red. The damage values of each token follows the values of American coins: 5, 10, and 25 (a nickel, dime, and quarter). Round damage up to the nearest 5. So if you deal 4 hit points of damage to an Orc, that rounds up to 5, and you’d place a green damage counter beneath the miniature. On the next hit, if you deal them 8 additional damage, you’d add a yellow counter beneath them.

Yes, the damage goes up slightly, but in most games it makes very little difference to the balance of the encounter. You can easily add another creature or up their total hit points slightly if you want, but in practice, it feels very organic and satisfying.

I’ve been testing this technique for many months in several different groups. Here is what people are saying:

Most creatures won’t use more than 2 or 3 counters before they die.