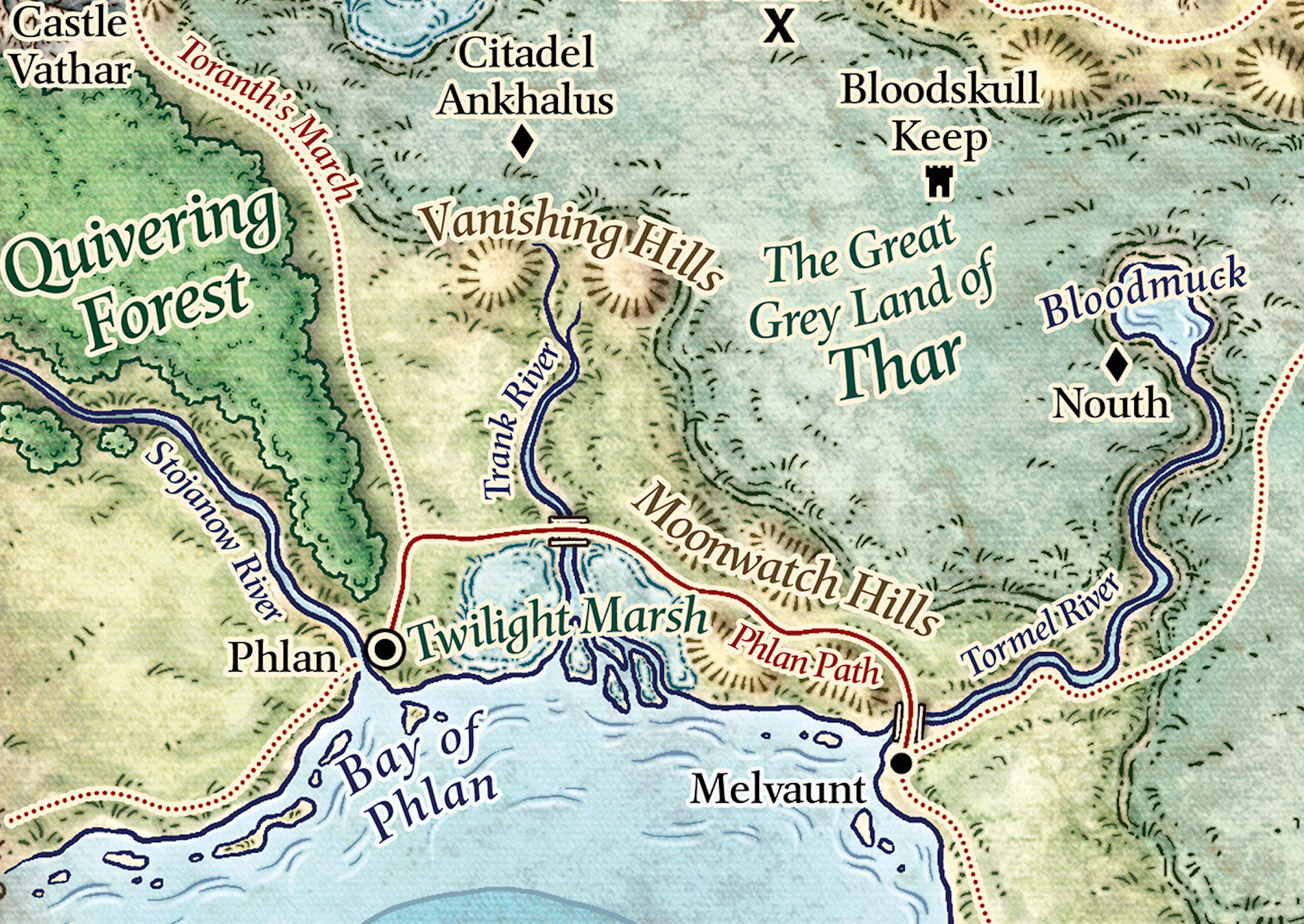 For those attending the D&D demo day, here’s what you need to know. You can show up with just a smile, no prep necessary. However, if you want to create your own character prior to game-day, that’s cool, just read below.

In the world of the Forgotten Realms, it is the year 1485 DR (Dalereckoning). You and your companions have journeyed to Phlan in the Moonsea region in search of your fortune. Originally constructed over a thousand years ago, Phlan has grown rich from trade with the untamed wilds to the north of the Moonsea. Those seeking their fortunes flock to the town before venturing out into the enchanted Quivering Forest, the mysterious Sorcerer’s Isle, and the savage Dragonspine Mountains.

You and your companions are meeting with a man named Neistor, overlord of the village of Darkshelf, just to the West of Phlan across the Stojanow River. Dark things are afoot and Neistor has a job for you.

Here’s a map of the Moonsea region: http://i255.photobucket.com/albums/hh142/Hyderlic/MapofVaasa.jpg
Phlan is on the Southwest corner, and Darkshelf is slighly west of that across the Stojanow river, not marked on the map.

Here’s a close-up of the area: You don’t need to do anything to prepare! I’ll have 1st level pre-gens, but feel free to create your own 1st level characters based on either the free
basic rules at http://dnd.wizards.com/articles/features/basicrules or using the D&D 5e Player’s Handbook.

If you create your own background (with Ideals, Flaws, Bonds, etc.), you might want to tie it in to the Moonsea region. You can read more about the Moonsea area at http://forgottenrealms.wikia.com/wiki/Moonsea. The D&D Expeditions games I’ll be running at WaCon will all be set in this same region.

You can get character sheets here if you’re making your own: http://dnd.wizards.com/articles/features/character_sheets

And starter set pre-gens here if you just want to pick one of those characters:
http://media.wizards.com/downloads/dnd/StarterSet_Charactersv2.pdf 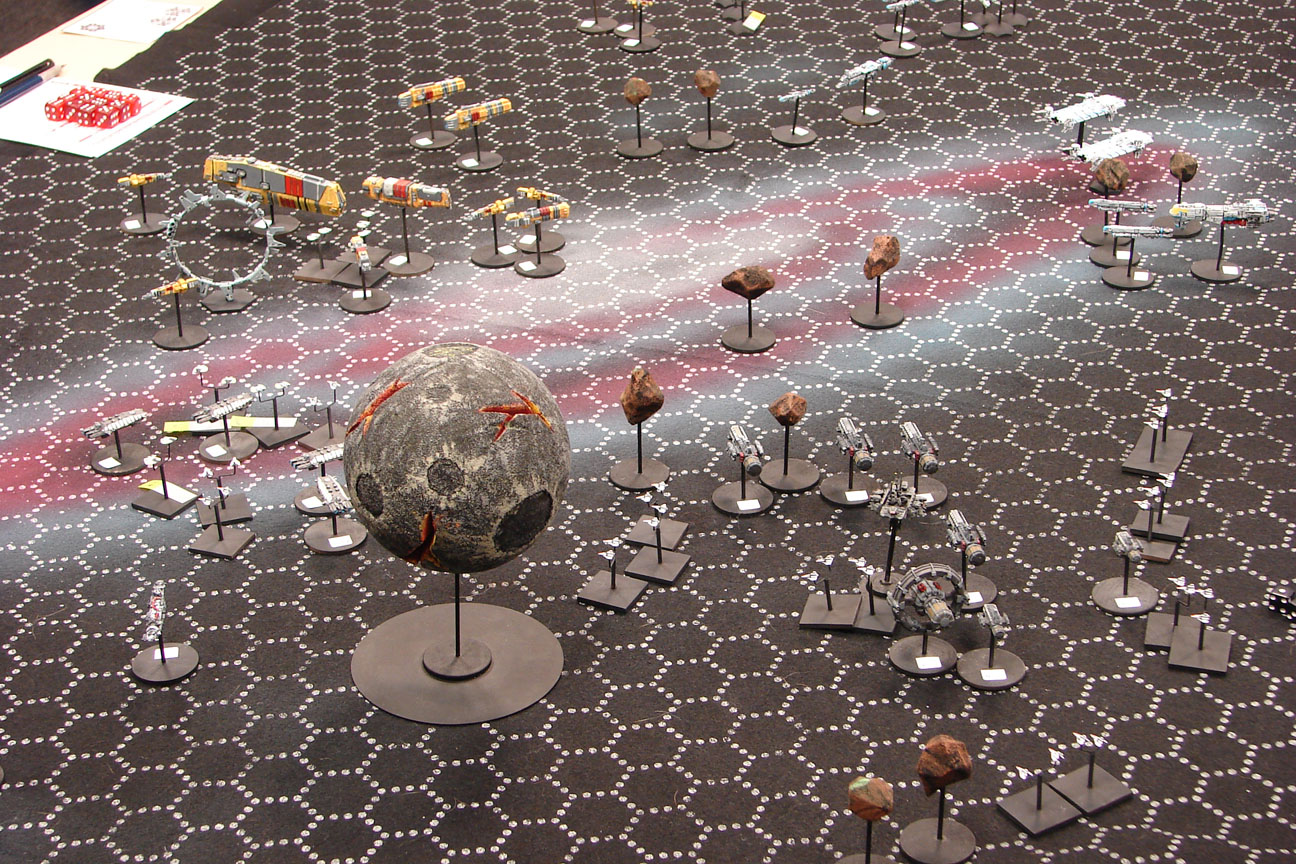 One of the things our Traveller group at ShinnCon decided was that we wanted to eventually get into large scale, epic fleet battles. Classic Traveller (and related systems like Striker, Mayday, Azhanti High Lightning which deal with skirmish, on-ship or small ship-to-ship encounters) doesn’t seem to be well suited to this. Especially given we have 9 players! So I’ve been researching starship miniatures combat systems.

Ideal things I’m looking for (not sure I can get all these things in one system, but will try to get as many as I can):

With this in mind, I’ve narrowed it down to four systems:

Seem like nice rules. Not sure how well they convert to other settings, or scale to multiple players. Will definitely consider these though, as we’ll eventually be doing a Star Frontiers game after our Traveller run.

Right now if I had to guess, this is the front-runner.

Great support and lots resources. It does seem to be a bit crunchier than the systems above though.

If you want small to medium sized fleets (a dozen vessels per side or less), that’s where most games these days tend to sit. Full Thrust, Starmada, etc.

If you want larger fleets (about 20 or so per side, possibly up to 30), then A Sky Full of Ships seems to be a popular choice. 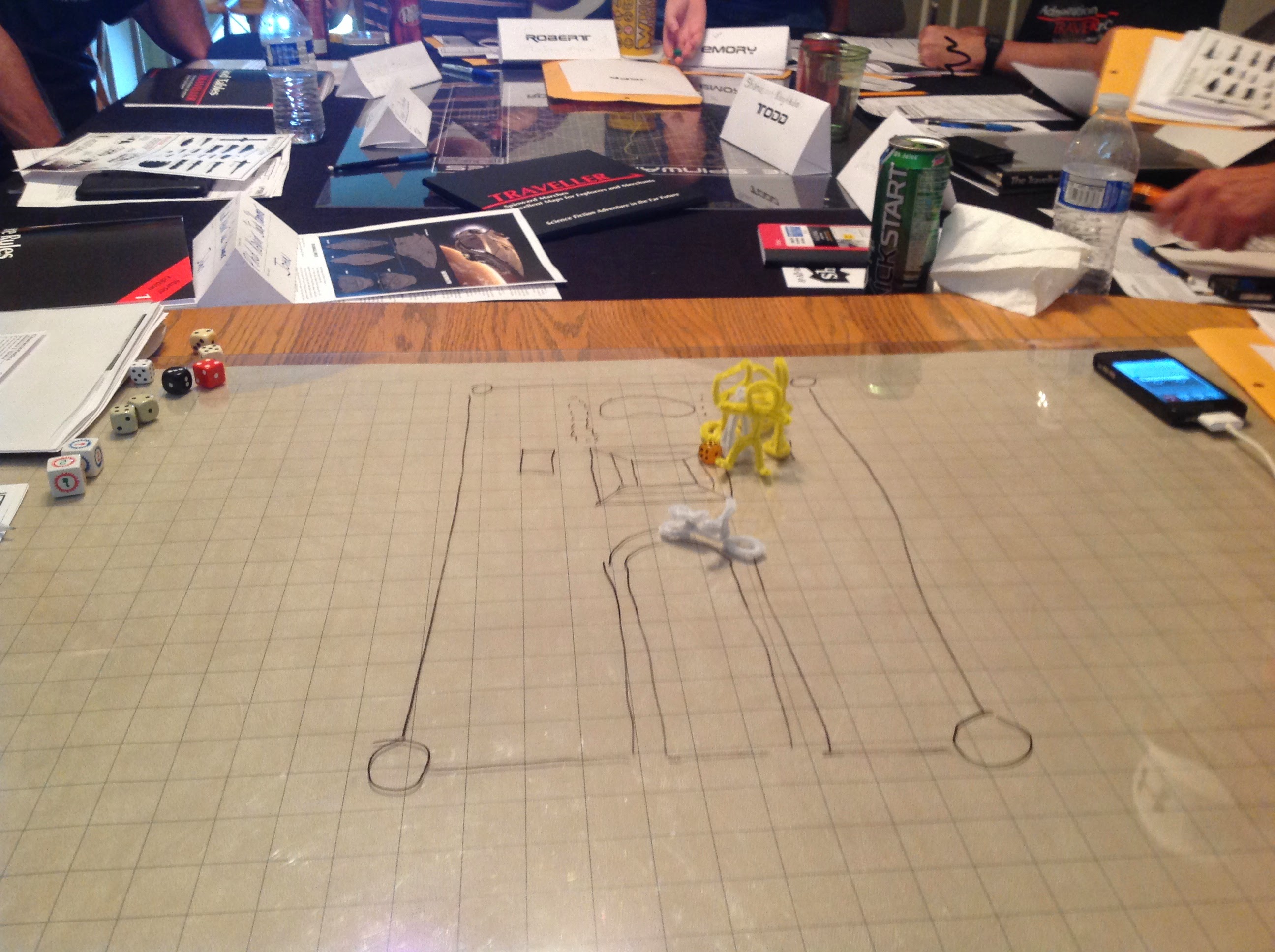 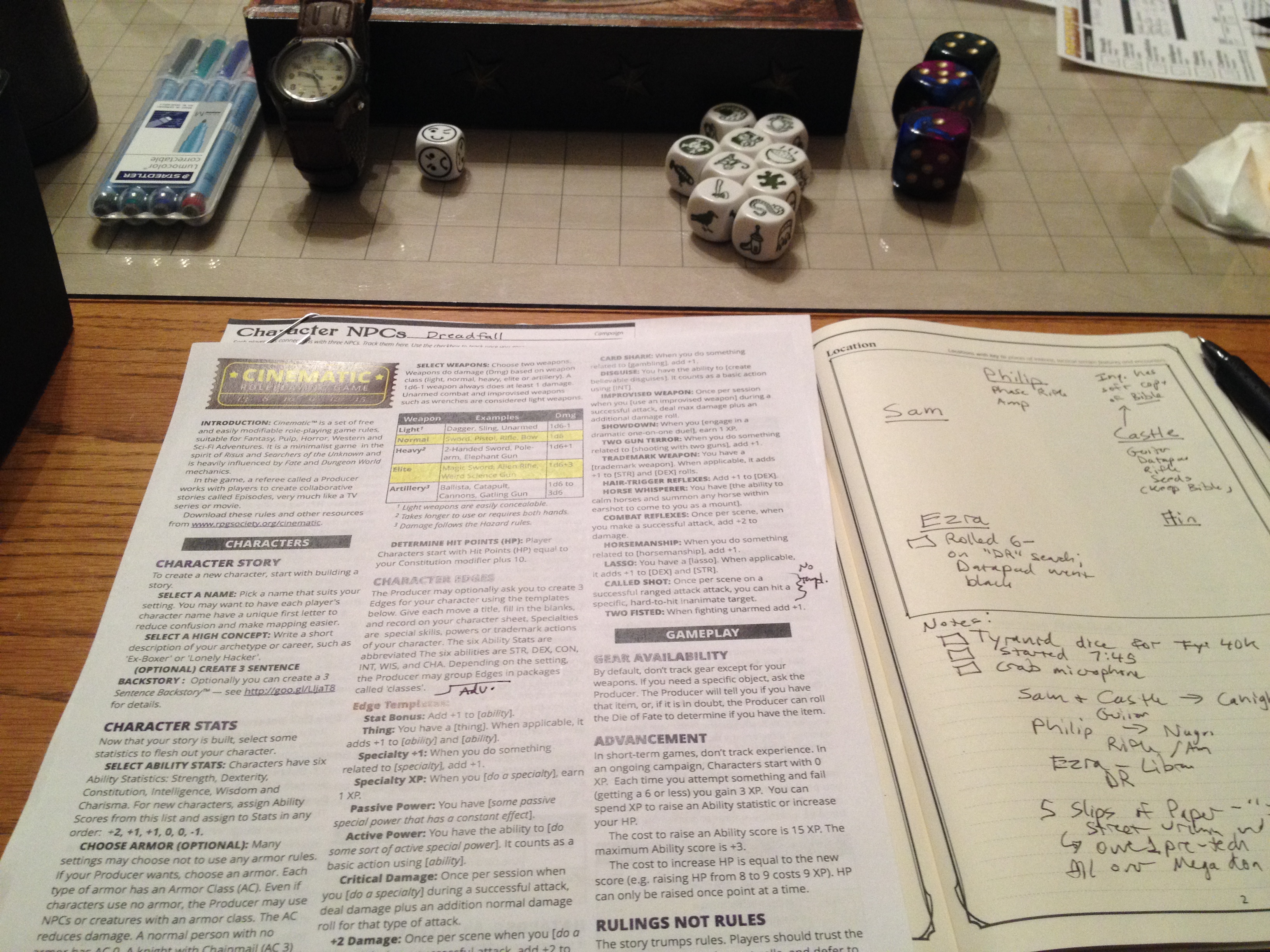 Players: Everyone was present at this game.

XP: All players earned 7 XP; a few earned additional XP due to Edges or rolling 6-.

At games end the players discovered what “DR” and “34D” GM’s view of the game

stood for, but this only raised new questions. 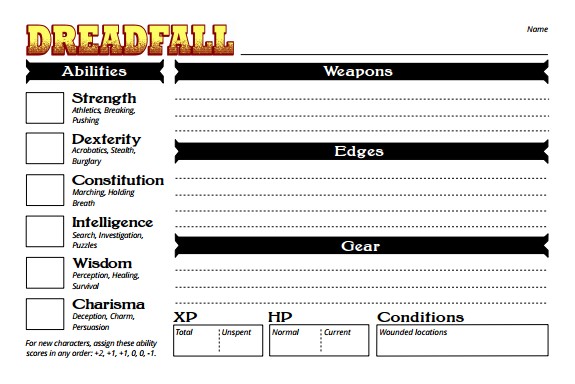 Players: Everyone but Jeff was present at this game.

XP: Players started with 10 XP. At the end of the session Jim Bob earned an extra 3 XP (1 XP but ret-conned to 3 once our rules changed).

We converted from Fate over the Stan’s Apocalypse World hack called Cinematic. Hello and welcome to Dicehaven! We are a game club in the DFW area who play tabletop roleplaying games. Check out our podcast and our musings and resource on roleplaying.

Training my oversized d20 to roll high (you keep t

Played a game of Wastelands today which is a sort

My wife saw this billboard while driving in Dallas

Imbibing some Mirkwood Merlot in my Middle-Earth R 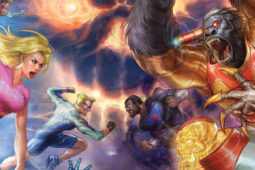