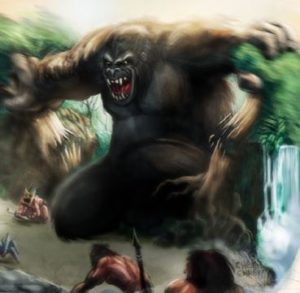 The Crew decided to head to Tressa the Red to find out if she had any leads on the Sword of King Amemnus. While traveling they spotted smoke off the coast of Torath-Ka and discover it to be a primitive human camp along the shore which was uncharted.

They decided to investigate but was attacked by an Ukak summoned megalodon named Jinka-Tahn.This armored beast seemed unstoppable, normal shots were simply bouncing off its hide. The giant shark attacked the ship and was about to take a large chunk out of the hull when a combined attack by Kal, Rodrigo weakened the beast and the keen aim of Kukukachoo brought the beast down by sinking both harpoons into its eyes killing the shark instantly.

They arrived to camp Victoria to discover a bedraggled but living survivors of an expedition funded by Bruno Baltimus and Edward Lazenby. The expedition had erected a fortification and was able to keep the local Ukak tribe at bay but was running low on gunpowder and provision. Their leader, a big game hunter from Earth, Angus McBryde decided to seek out the Ukak Shaman and end the attacks before his people lost the siege.

The Crew decided to find and help Angus and treked through the hot dangerous jungle for several days, drained to the point of exhaustion the Crew found Angus who stubbornly refused to leave without killing the Shaman and rescuing some of his men the Ukak had taken captive.

They arrived just before the Ukak Shaman started sacrificing the men in their Blood Pools but were too late to stop their death. Sacrificing their life the Ukak were dragging the captives into the Pool in an attempt to summon some great beast. Right as the last Ukak warrior was slain he managed to one last person into the Pool.

The Pool bubbled and frothed as the form of a Giant 60’ tall Ape, Donga arose! The huge Ape instantly slayed two of Angus’s men and took aim for Kal but between the Crews combined attack and Kukikachoo’s enhanced Grual battle balls the heros managed to slay the beast before he struck again (GM note: Very lucky!)

Yet again the Crew foiled the foul blood magic of the Ukak and survived to tell their tale.