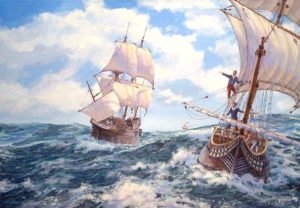 They volunteered for their own reasons.  As word spread throughout the Gothic Empire of the discovery of a vast and new land, the Emperor’s aides quickly assembled the first year of cadets in the Imperial War Academy.  For various reasons, the party volunteered to leave hearth and home, maybe to never return to the shores of the Gothic Empire, to family, to all they knew. But volunteer they did.

The party journeyed on a thirty day coach trip to Krugersport, in the Western March, and met with Baron Manfred von Kruger (thirteenth of his line).  There, the party took the generous offerings of the Baron and the Emperor, and outfitted their Carrack, the Baron’s Revenge.  They also purchased a second Carrack, and named it Beric’s Blessing (after the prophet Berric).  The party screened settlers, and stocked the ship with provisions, livestock, and settlers.

Finally, before departure, the party tracked down one of the few survivors of the discovery voyage.  Rustig Tannor was laying in bed, sick with the Bloody Pox, a disease he claimed came from touching a new type of bird in the New World.  They didn’t find out much from Rustig, except that the passage was arduous and stormy, and that they had only stayed on shore for a few hours before rushing back to the Empire and safety.

Finally stocked and ready, the two Carracks sailed out of Krugersport to a ticker tape departure, with thousands cheering the two intrepid ships.  May 25, TYOTE (the year of the empire) 1149. From information gathered, the party estimated a three month journey to the new lands. At first, the seas were calm, and the ships made good time (150 miles a day).  Then a bracket of small storms slowed the two ships down.  On August 15, the skies on the south, west, and north turned dark and tumultuous.  The first band of storms hit the two ships that evening, with 120 mph winds.  One mast of Berric’s Blessing snapped even as the sails had been taken down.  As the first band passed, the crew prayed to the One God through Beric that they were through the worst part.  Beric could not hear.  The next wave hit the ships, with 150 mph winds, and lasted almost a day.  Several passengers died from the unheard of tossing and cresting of the ships.  Then, an unnatural calm.  The ships had sailed into the eye of the cyclone.  For hours, the crew tended to the wounded, and butressed the masts. Then the eye passed, and the storm, with a growl, hit the two ships again, with the back side of the eye of the storm.  For another day, the ships were hit by a maximum of 188 mph winds.  Two more masts of Beric’s Blessing were snapped, as were two of the Baron’s Revenge. Three more passengers died, including Doctor Paltos.  With Beric’s Blessing down to one mast, and the Baron’s Revenge down to two, the ships made much slower goings.