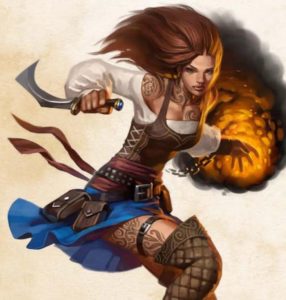 The Archmage Part 1 and 2

The Crew decided to visit Tressa the Red in order to obtain more information, mostly trying to determine the location of the Sword of Amemnus. Arriving at The Teeth they discovered her mages tower leaning preciously and signs of a struggle inside. Through some careful investigation they determined that the Inquisition attached the Tower, got past the traps and either took or killed Tressa. Kal was able to restore power to the Mage Tower and the rest of the Crew found a curious mirror with a single red parrot feather sticking out of the middle. It was determined the mirror was a magical relic that would be used to “teleport” across distances. The mirror was cracked and damaged but it did appear to be used. After much deliberation they decided to go after the Inquisition and with  information from a passing Kieran Cutter the Crew located the current location of the Perdition (Inquisition confessional barge and HQ).

While approaching the Perdition, Carnifax shot out of the Mirror and confirmed the Crews theory: The Inquisition attacked Tressas Tower, managed to get past the defences and captured Tressa. She was unable to make it to her mirror in time, instead sending Carnifax through to the find the Crew for help, unfortunately the Mirror was partially damaged so he was stuck inside until now.

As they drew closer to the island the Perdition was harboring at, Carnifax fell to the ground shaking and speaking with Tressas voice said:

“Torquemada has won, but the Sea Hags have lost. Find my heart. Use it against them.

days I endured Torquemada’s torments. I hope it was enough.”

Tressa was dead and Carnifax was dying. The Crew managed to heal the bird and vowed vengeance on the Inquisition and now sought to recover the heart of the Archmage…

Nearing the Perdition, The Crew came up with a plan to trick the Inquisition into either selling Tressas body or at the very least getting onboard. Leaving the Liberators Wrath out of sight they approached the Perdition on a longboat with hidden kegs of gunpowder. Bracus managed to bluff his way onboard with most of the Crew. Crow stays on the long boat and Daxon/Kal stayed in the water hidden.

While in audience with Torquemada bartering for the body, Bracus managed to insult the Inquisition leader but Rodrigo played off this insult instead implying this was a test of their true conviction. Torquemada was convinced that Rodrigo wanted to join the Inquisition and allowed the Crew to stay on board in quarters. At the following dawn Rodrigo would receive the Inquisition Tattoos and become one of their own.

As  Dawn approached, Daxon managed to kill and replace one of the guards, Kal readying a blast for the bottom deck of the barge and Crow stood ready to light the longboat on fire and blow out the deck. Secretly Daxon “activated” Redbeards triangles in the night… The rest of the Crew played along with the ceremony until a the last moment, Rodrigo faked a betrayal of Mordecai as an air mage, giving Rodrigo the opportunity to arm himself and strike out to kill Torquemada.

At that moment Crow blew up the longboat, Kal placed a mighty blast on the lower deck of the ship and RedBeard appeared with his ghost ship. All hell broke loose on the deck with fighting inquisitors, ghost pirates attacking, fire and a badly listing/sinking Perdition.

In the chaos Daxon managed to acquire Tressas body and leap off the ship, Rodrigo tried to finish off Torquemada but failed and lost his arm and almost his life in the process. Crow turned into his young Roc and took off with Rodrigo while the rest of the Crew ran for their lives. They all made it ashore just in time as Redbeard figured out he was tricked but unable to go on land to enact his vengeance. The Crew watched the Perdition burn and sink as Torquemada escaped to the far shore.

Tressas body was recovered, but at what cost?