I’ve now run three ‘Adventures in Middle-earth’ game sessions. I love it! It is a fantastic and very faithful adaptation of the Tolkien material.

There were a few things I got wrong the first time I ran it, and there are some different game-style assumptions that require a slightly modified approach to get the most out of this new, wonderful 5e setting. Here’s my advice to new gamemasters (called ‘Loremasters’) who are thinking of running a Middle-earth campaign using’Adventures in Middle-earth’ (or AiME). 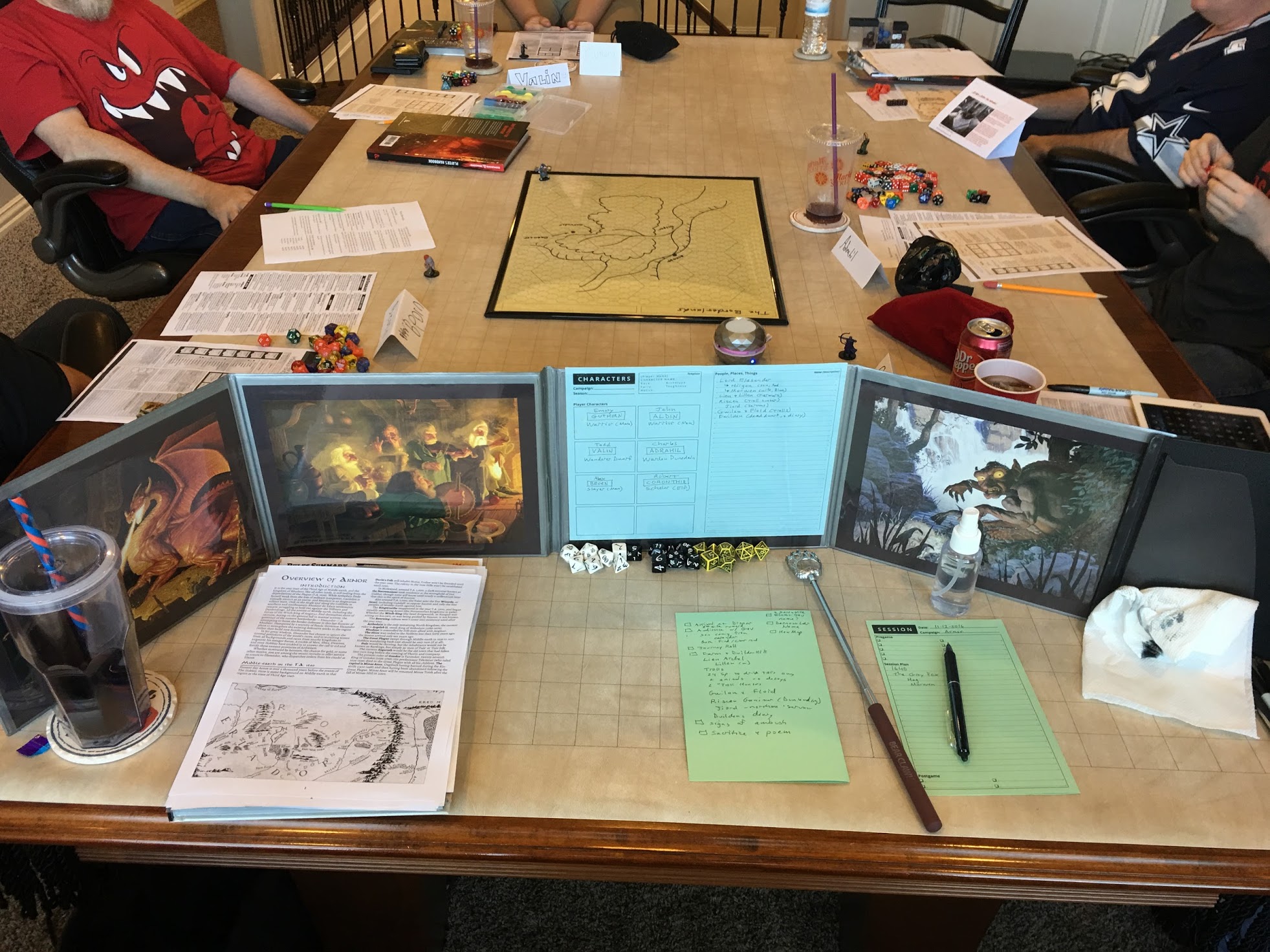 My First ‘Adventures in Middle-earth’ Game

Journeys and Mapping Are A Key Activity

Journeys are a big part of each game. Players are going to spend more time than you would think having fun strategizing over routes to take, who is going to take on the role as ‘Guide’, and other activities involved in planning and taking a Journey. The mechanics are new but after a couple of sessions things flow pretty quickly.

There’s so much fun looking over the map and seeing places everyone has some familiarity with. ‘Hey, those are the Barrow-downs!’ ‘Say, Amon Sul is the same as Weathertop — that’s where Frodo and company were attacked by the Nazgul!’. It was interesting to play in a world so familiar and rich with history. It felt like we were in a campaign that everyone had been playing together for 20 years.

Journeys can be long. You can easily take a journey of 150 or 300 miles before you get to your main destination. As such, the rules don’t follow traditional hex crawl procedures. My traditional hex crawl method was (doing this for each and every hex): enter a hex ➞ roll for encounters ➞ rest for the night ➞ see if anything happens while you’re on watch ➞ travel to the next hex.

In AiME, by default, although you plan a route through a dozen ten-mile hexes or more, you don’t track where you’re at on a specific day. Instead, you may have a Journey Event that takes place at an abstract time and place during the journey. For example, the Loremaster might say: “several days into the journey as you enter the bogs, you encounter a band of orcs”.

I got confused by this the first game I ran a Journey. Worked much better when I didn’t track exact days and distance the following session.

From day one, you’re immersed into a ‘kingdoms’  focus that feels somewhat like the ‘strongholds’ end-game of the old White Box / BX / 1e D&D days. During the Fellowship Phase players can do things like receive Titles and create Sanctuaries. Sanctuaries end up being a big deal — if you have to routinely make a long journey with no Sanctuary in the middle to stop and recover, you’ll have more negative Journey Events, more enemy encounters and such. Build a Sanctuary mid-way and split that route into two Short journeys and you’ll have much easier travels.

The fact that months or even a full year can pass during a Fellowship phase infuses a grand, epic air into your activities. Very Tolkienesque, even when players are low-level characters!

The books and maps work best if you run your campaign in the era between the time of The Hobbit and The Lord of the Rings and place your campaign in or around Mirkwood. If you wan to try running adventures in a different land or time period, you’ll have some additional work. Personally, I like the year 1640 in the Third Age (centuries before The Hobbit) since I can pull out and use my many MERP modules (old Iron Crown ‘Middle-earth Roleplaying’ adventures that used the Rolemaster system).

You’ll have to tweak a few things and use a different map, but I’m doing it and it’s working fine with a bit of effort. See my house-rules and map resources for doing a TA 1640 campaign.

The ‘Wanderer’ class has a ‘Known Lands’ feature that you’ll need to take into account if you use a different map than the one they provide in the Player’s Guide.

One thing I was surprised about was the intense sandbox gamestyle AiME fostered due to features built into the characters. For example, there is a background feature ‘Foreknowledge’ plus Fellowship phase activities ‘Research Lore’ and ‘Meet Patron’ which end up letting players ask questions and get answers at the beginning and end of games. Characters end up asking questions and generating patrons or quests which drives story lines that are entirely of the player’s origin. I love it! Using ‘Dungeon World’ style fronts is a great approach to driving adventures after a session or two of play.

Because of this, and because of the Journey and Fellowship phases, game session structures are quite different than in my traditional D&D game. After three games, here’s how a game that ends up with a Fellowship Phase might pan out for a four hour session:

Note the items in bold — these are gameplay phases that I would often skip or run very quickly in a traditional D&D game. In Adventure in Middle-earth, they can be about half a game session!

Journeys include encounters that can be things like an Orc Band, a Troll, wandering group of singing Elves, or an opportunity to hunt down Herbs or Food (that give mechanical benefits; they’re sort of like magic items). Journeys and the sandbox adventuring that spring out of them are a big part of the game, and also take a chunk of game time. A good thing, but you should budget game session time for these things 🙂

There are some Journey related modifiers, as well as Fellowship phase events, which can carry over from session to session. I’ve now started to use a publicly visible whiteboard to take note of Journey modifiers as they come up during the Embarkation and Journey Event phases. Helps me not lose track of something.

Ramping Up on Tolkien Canon

You can plunge in to running AiME without being a Tolkien scholar. That being said, it helps to re-read the books (or watch the movies) before or as you run a campaign. I’m found myself gaining interest in reading up on various Tolkien topics.  Some resources I’ve found helpful:

Youtube has some great videos you can give to players. In twelve minutes, you can learn just about all you need to know! Have players watch these two videos (second one is if you’re running TA 1640 campaigns):