Heroes of Arnor: Shrine of the Seven Stones

In March (the 25th Day of Gwaeron, T.A. 1641), the heroes receive word that the Lord Elesander’s wife Morwen has taken ill. The heroes are joined by their newest companion, a dwarf named Crom, fresh from Rivendell where also Aldin, Éothain, and Adrahil had sojourned this winter.

The court’s healers can do nothing for her, and the ancient scrolls and books in her chamber suggest some foul work of the Shadow has caused her malady. The heroes examine Morwen’s desk and see scroll fragments that suggest she read a cursed spell which put her into enchanted and fitful slumber. Other scroll fragments also suggest a cure.

In a high mountain valley south of Ossarnen lies Setmaenen, the place for which the town was named, a large man-made mound of earth supported and strengthened by stones. Seven stone pillars, 30′ Standing-stones surround the mound, within an age-old ceremonial ring.

Everyone knows that Setmaenen was a holy place of the ancient Daen Coentis, one of their calendar-temples, but no one remembers what festivals were celebrated on its hallowed grounds. Few have gone in there, and those few reported nothing spectacular: old carvings, sacrificial basins of stone. Yet no one has dared desecrate the place, and those who go in report a feeling of being watched that is so strong that they dared do nothing but look about quietly and then leave.

In the time after the Last Alliance of Men and Elves, just following the fall of Sauron of Mordor, a Dark-priest called Brues Cuerd broke tradition and entered the Stone Mound. Bearing the stolen holy jewel called the Star of Gobha (which is called in Dunlending, “Gobha Reui”) and believing himself protected by its power, he sought healing.

Piecing together lore and these scroll fragments, the heroes believe that Setmaenen’s waters may hold the mystical healing that alone can cure Morwen.

Guthorn’s knowledge of lore leads him to recall legend of Setmaenen’s Location. The stories say it is along the East-West road, 7 leagues (25 miles) east of Hoarwell’s Last Bridge where the Trollshaw’s forest grow dense, is a town called Ossarnen. From there, one travels south 6 leagues. There, between two sharp-angled hills rests the shrine of Setmaenen.

The heroes set off. As they journey, Crom recalls a recent premonition of a silvery mist filled room where a malevolent force awaited. Could this room be inside Setmaenen?

The party journeys through snowy lands (for in north-eastern Arnor, it is a cold time of year indeed) and days later, find Ossarnen. Their they encounter a bard who offers to lead them to Setmaenen, since he is familiar with it and with Haedric, a conjurer of cheap tricks who lives in the area. The bard tells them this of Setmaenen:

Setmaenen was once one of the holiest sites of the Daen Coentis, so much so that even in their sad latter days — the Time of the Oathbreaking and the downfall to Darkness — none of the Darkpriests dared to adapt it to their barbaric rituals. Called in the old tongue Setmaenen (which also means “Seven Stones”), it was dedicated to Fois (Este), Vala of healing of the body and spirit. At Years-end, in the darkness before the Yule dawn of the winter solstice, those who still suffered despite the soothing hands of healers, those touched with madness, and those crippled by sorrow, guilt, or other painful emotion would gather in this high valley and listen to the Priests and Priestesses of Fois sing sweet hymns of praise to their gentle Goddess.

They travel to Haedric’s, and after he lies to them about his interest in Setmaenen, the heroes work to eventually uncover the truth. Haedric is actively studying the shrine in hopes of unravelling the secrets of a spell book he has found chained to a dais inside. Haedric’s former friend died in a trap in the temple, so Haedric has dared travel no further into its depths.

The following day the heroes (absent the bard, but with Haedric in tow) arrive at Setmaenen. This is what they see. 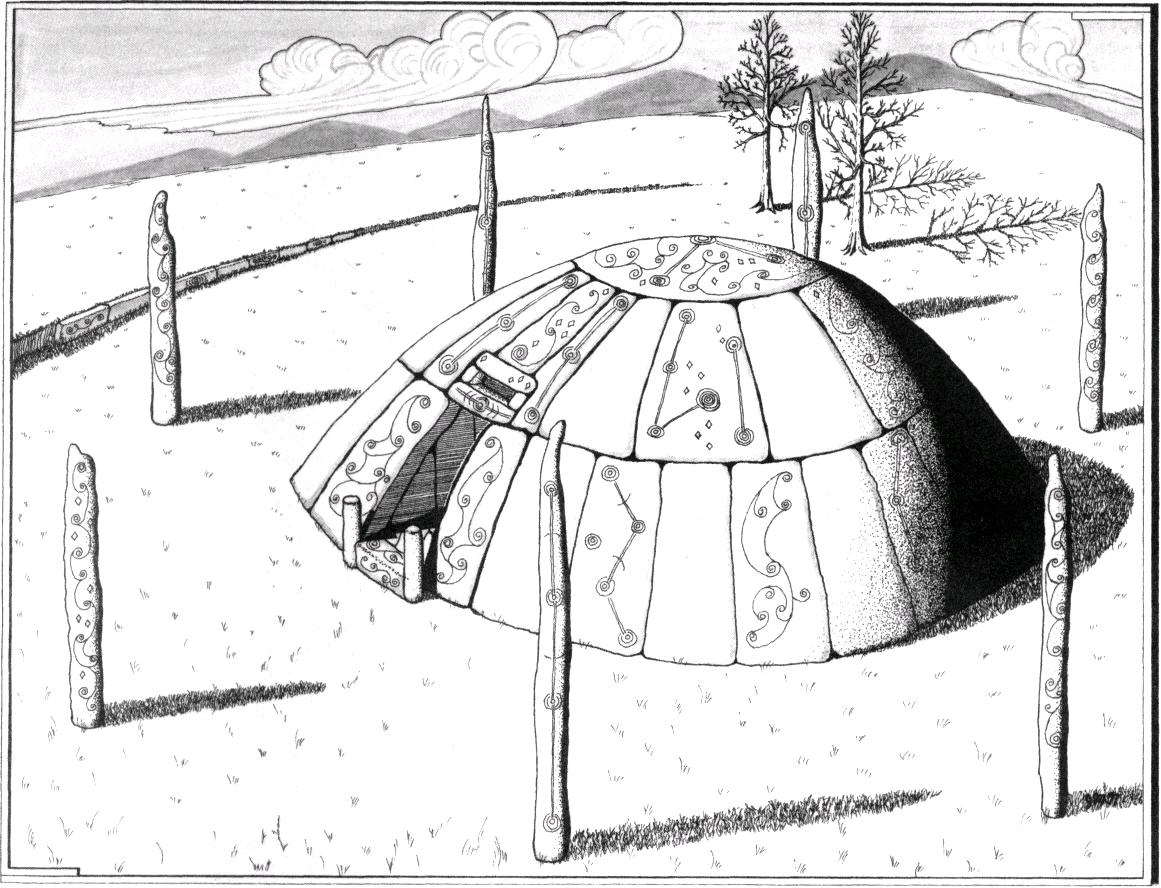 Many of the party initially flee in terror after trying to enter the circle of the seven pillars. Apparently, ancient wards guard the temple site. Many minutes later, the last of the party finally gathers their courage and steel themselves to enter the massive dome, its door twenty feet wide.

Inside the party finds basins reflecting the worship of the former followers of Fois. Searching the dome, they enter parts which Haedric had never before dared visit. A trap in the floor springs and leaves Aldin injured and trapped in quicksand. His friends retrieve him before the trap door again slides shut.

Finally, the party enter the lowest and main chamber of Setmaenen: a large dome, adorned by an underground tree that is part alive and part artifice. The room is filled with silver mists.

The dwarf Crom recalls his dream, and shivers.