I wanted to get a sense of the relative speed to run combat when using Traveller 2e, Star Wars: The Roleplaying Game 1e (the West End Games d6 version), and my own mass-combat wargame rules based on One Page Rules. Here are the results, along with my rules cheat sheet I used when running the mock combat.

There are 5 Star Wars Stormtroopers firing at 5 Rebel agents who were discovered undercover, disguised in Stormtrooper armor. Both sides use identical stats.

After each round I stop to stap a picture of the end of round status.

Actual combat in a real RPG game would take longer than any of these simulations of course since there is table banter, people moving minis around, rules discussions, and so forth, so these numbers only give a relative sense of combat time.

Attack: Roll d6s for each model to hit. 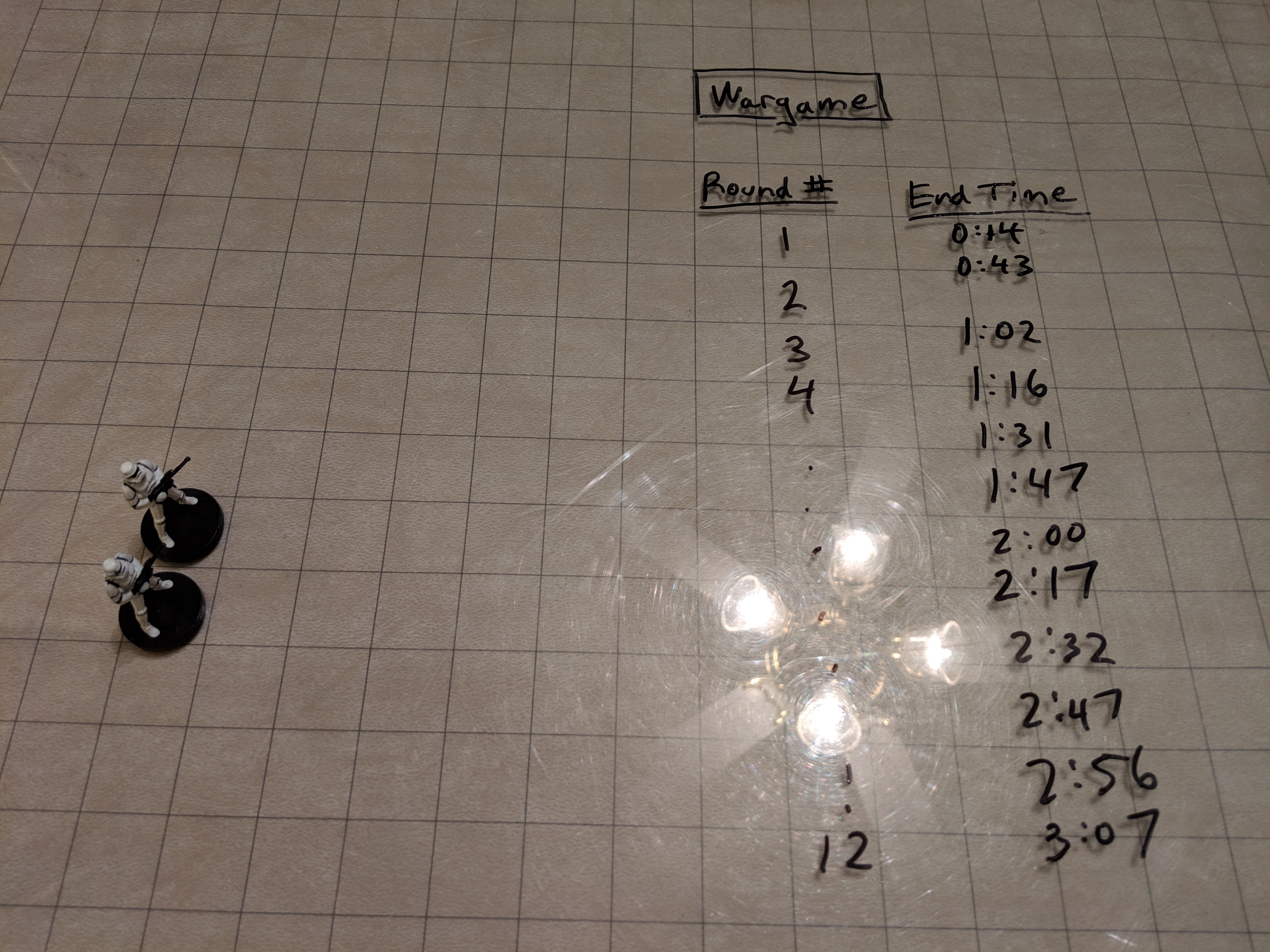 Prone Characters: +2 target number to hit , -1D on skill checks, costs an action (at -1D) to rise from prone. You can always fall prone without penalty at the end of your movement.

House Rule: A Strength to resist damage roll must be at least double the damage roll to completely soak it, so just beating the damage roll (but less than double) is still a stun (for normal damage). (this is from the 1e Rules Companion) 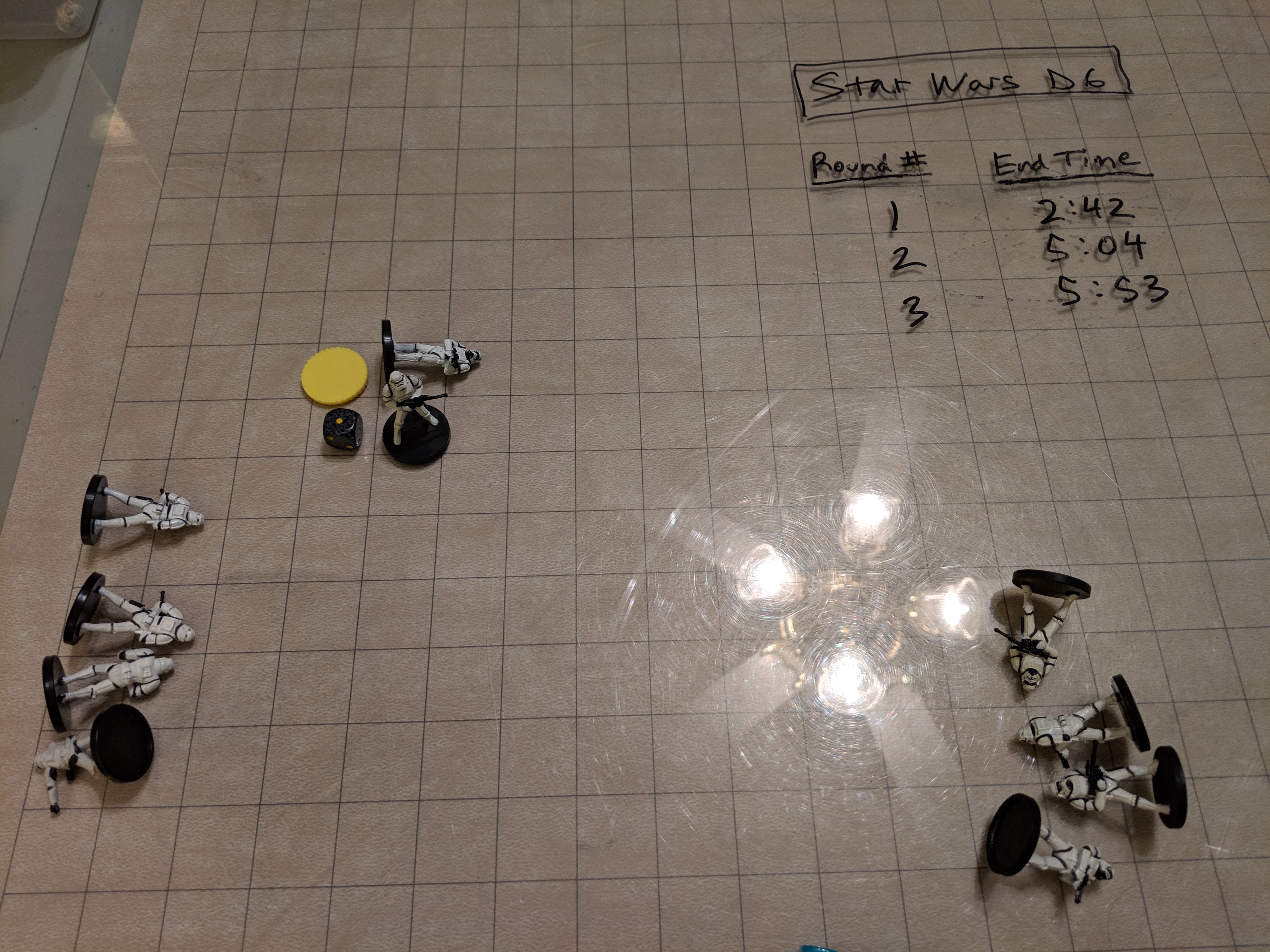 After 14 points of damage the character is out of combat. 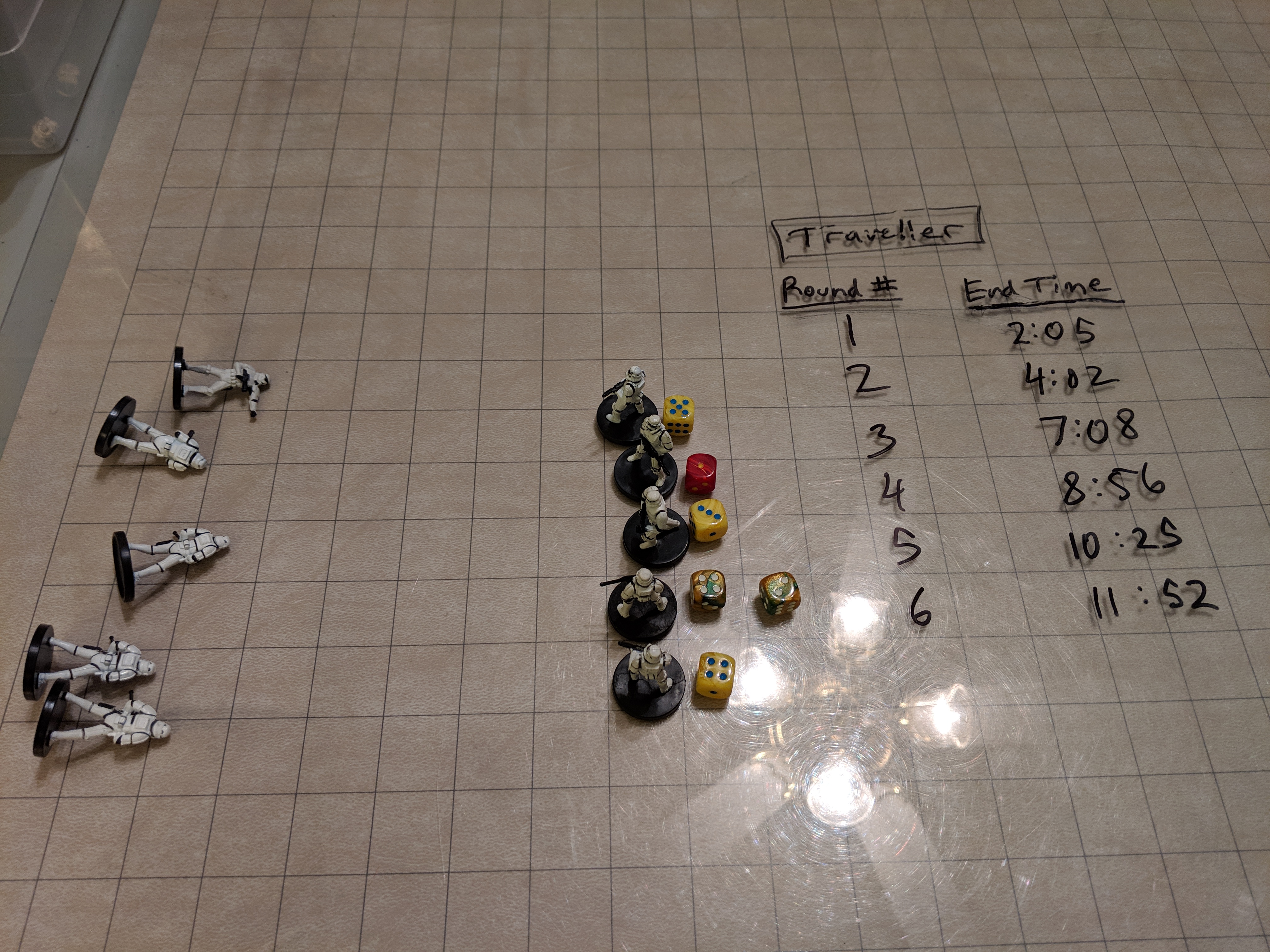 After running the simulated combat here’s what I am thinking about tracking damage in Star Wars:

Also consider using Litko tokens such as these:

Here are the key metrics from the simulation:

Star Wars Combat is as Fast or Faster Than Traveller — Star Wars d6 combat resolved in half the time the same combat took to resolve in Traveller. Part of this I think is Traveller armor provides serious protection, whereas the Stormtrooper armor I think was a bit nerfed. If you increased the Strength and/or Armor of Star Wars combatants, I think it would take longer to resolve. This was surprising to me; I assumed that the different wound levels would increase combat time. Aside from this though, it seemed it was easier to hit opponents in Star Wars d6, making me think that surprising opponents and taking cover is a big deal, maybe even more impactful than in Traveller.

d6 Math is Simple and Fast — Star Wars d6 flowed much more smoothly than I expected. I was thinking it would feel more like Savage Worlds. What I noted was that (like Traveller) dice selection was fast (everything is a d6, unlike Savage Worlds or D&D). In Star Wars d6, most math is addition, with the only other math the quick multiplication of comparing Damage to Strength. It’s pretty simple to eyeball a number and say “is my Damage double the Strength roll?” You don’t even have to do the math — I can quickly decide 13 Damage is higher than but not double a Strength roll of 11 even without doing the multiplication. So in most cases you’re just adding dice scores together. Thinks like Armor let you add or subtract dice from the dice pool which is easier than math (this reminded me of Cortex, where physically adding and subtracting dice is done before the roll, making things easier). Compare this to Star Wars d6 2e or Savage Worlds where you take the results and do division on it to determine wounds. Even Traveller feels a bit more complicated — you’re subtracting 8 from the skill check to determine the Effect, and then subtracting Armor from the Damage result. Star Wars d6 notion of ‘add, compare’ feels simpler and faster than Traveller’s ‘add, subtract, add, subtract’ or Savage Worlds ‘add, explode, add, divide, compare’.

Traveller is More Predictable — Star Wars feels more ‘swingy’ than Traveller and its harder (for me anyway) to eyeball and determine likely outcomes. Traveller is more consistent (target number is always 8) and damage and the outcome of battles seems more even and predictable.

Damage Tracking Using Tokens in Star Wars is Smooth — Damage tracking was simpler in Star Wars than I was expecting when using Tokens. For Traveller, I use d6s which take a second to flip around to find the right set of pips on the die. Colored tokens in Star Wars can be placed under the mini and take less space on the battlemat. Unlike Savage Worlds, there is no ‘unshake’ option, so (aside from Stunned tokens), wounds, once received, stay with you. So combat is fast, and there is not a lot of extra dice rolls or fiddling with tokens to unshake or remove tokens.