After the party talks with the Treant, they settle down inside of the hut created by Ghost Dancer. 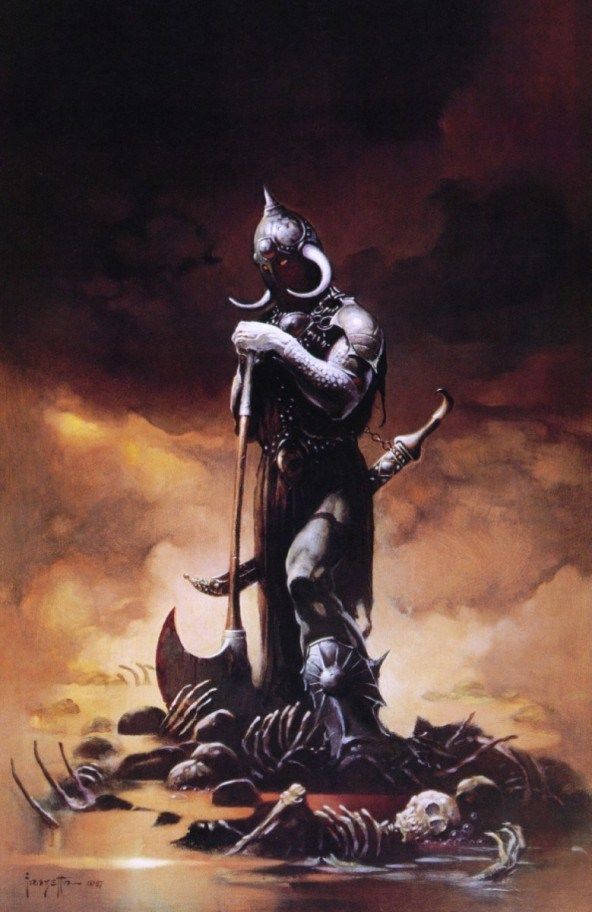 The Death Dealer (by Frank Frazetta)

At midnight at the start of the 10th; Quintos has a vision.  He sees a battle raging forces of good and evil in the cleft of two mountains. This battle appears to be in the time of the first age of Thrëa.

Quintos sees two “death dealers” on the side of the evil army, a taller one (15′ tall) with a great sword and the other (7′ tall) with a great axe.  On the side of the heroic army, Quintos sees someone he recognizes as the 1st Age hero named Arkland who fights alongside heroic compatriots fighting a massive army. The greater of the two dark figures uses his eldritch powers to ignite all the trees and foliage in the area, turning the battleground into an hellish arena. Arkland’s weapon shatters as his blade meets the dark sword’s edge of the taller death dealer.

One of Arkland’s helmed companions intervenes to save Arkland from a blow of a demon axe and takes a mortal blow. As she falls, her helmet comes off, revealing it is Thëa, Arkland’s love. Arkland falls to her side, devestated.

As the battle rages and Arkland is about to die at the hands of the taller death dealer, Arkland prays in the language of the Anthron. An angelic being then appears: Sephna. Quintos recognizes this as the self-same being as represented by a statue of Our Lady of Sorrows in Stonehelm.

Sephna stops the attack of the fiendish sword wielder, on Arkland. She then goes on to say, “As the sun melts wax and hardens clay, so is the Light of Eldëon: a power that brings life to the righteous, and suffering to the wicked.” She motions to a flaming tree, which transforms into a tree-styled magic sword, which floats over to Arkland who takes it as his new weapon.

At Sephna’s command, the earth opens and swallows up both Sephna and the taller death dealers as their battle goes underground.

As the vision fades, Sephna says to Quintos, “Seek the blade of the Arkoni, you will need it to fight the coming darkness.”  As the dream leaves Quintos, he is able to see the outline of the island of Dasarria and knows that the sword is buried in the tomb of Arkland near Mystkar. Arkland hears Sephna say that the name of the blade is, Spathixiforos, “The Tree Blade”.

Quintos wakes with a start and immediately wakes his life-long friend Marcus.  Marcus begins to furiously write down everything that Quintos tells him of the “dream”.  Lundie jokes that dream is obviously fantasy since Quintos saw the dwarf companion of Arkland get pushed aside by the axe-wielding death dealer.

Quintos awakes and relays these events in his vision to his friends. Others can add to the story: Gristag is the name of the lesser Deathdealer who wields an axe which is a living fiend who drinks the blood of those it slays. Margon is the name of the taller death dealer — a fallen Arkon, the most powerful of the fiendish creatures.

The party wakes up early and starts on their trek to find the buffalo’s for Ghost Dancer’s people.  They now have come to the plains of the island.  They are ambushed by Hagagakak’s sisters, Morgigak and Slithigak!  The sisters are riding dinosaurs and have shamans at their side.  Thanks to archery efforts of Ivamel, he is able to dislodge the sisters from atop their dinosaur mounts thus they lose control of the creatures.  This greatly emboldens the party and they are able to swiftly turn a certain death trap into a victory. 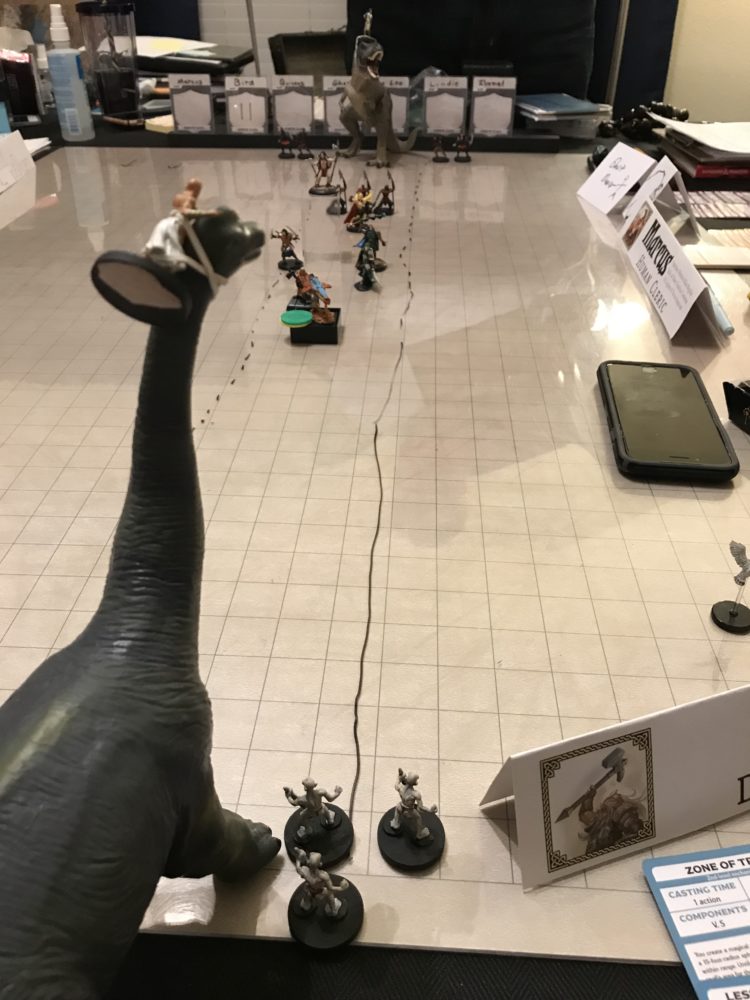 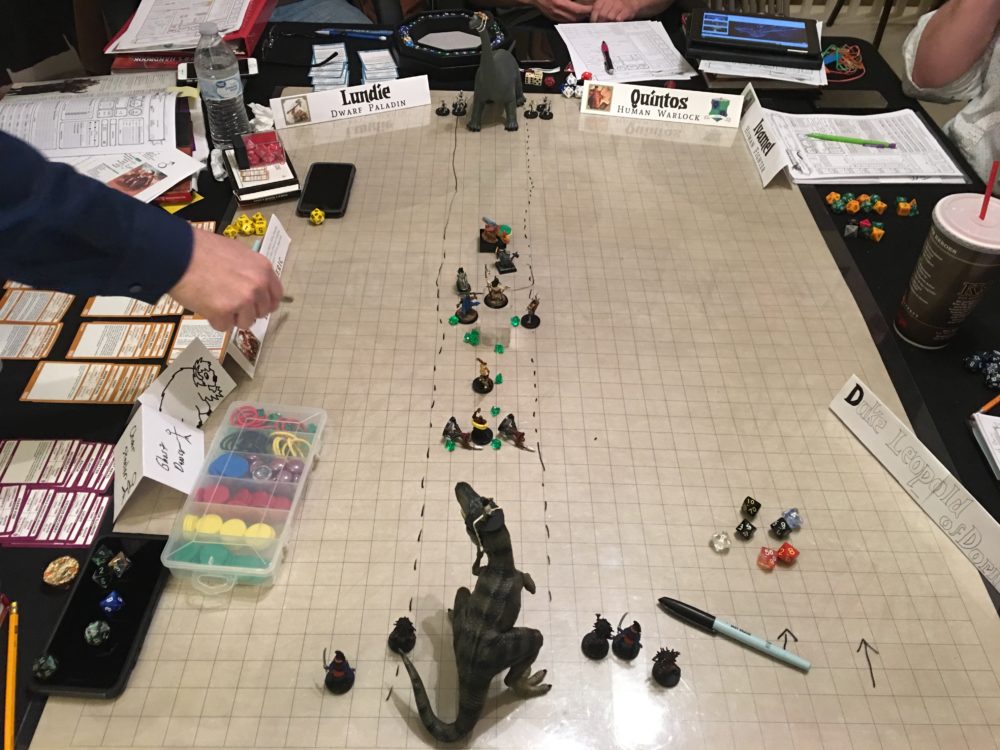 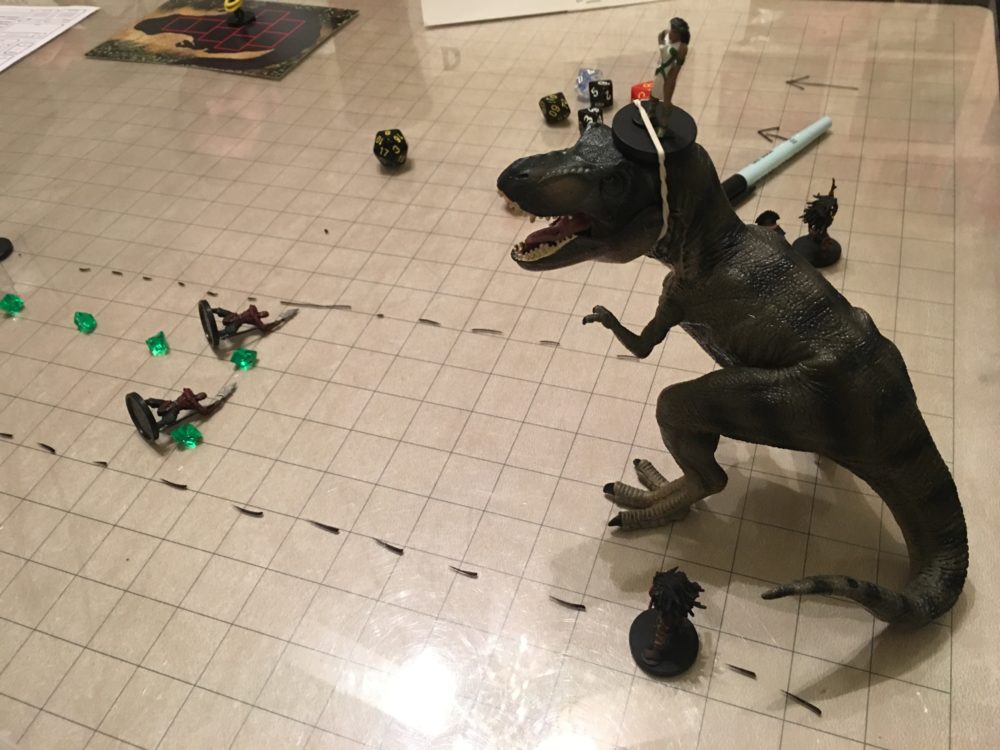 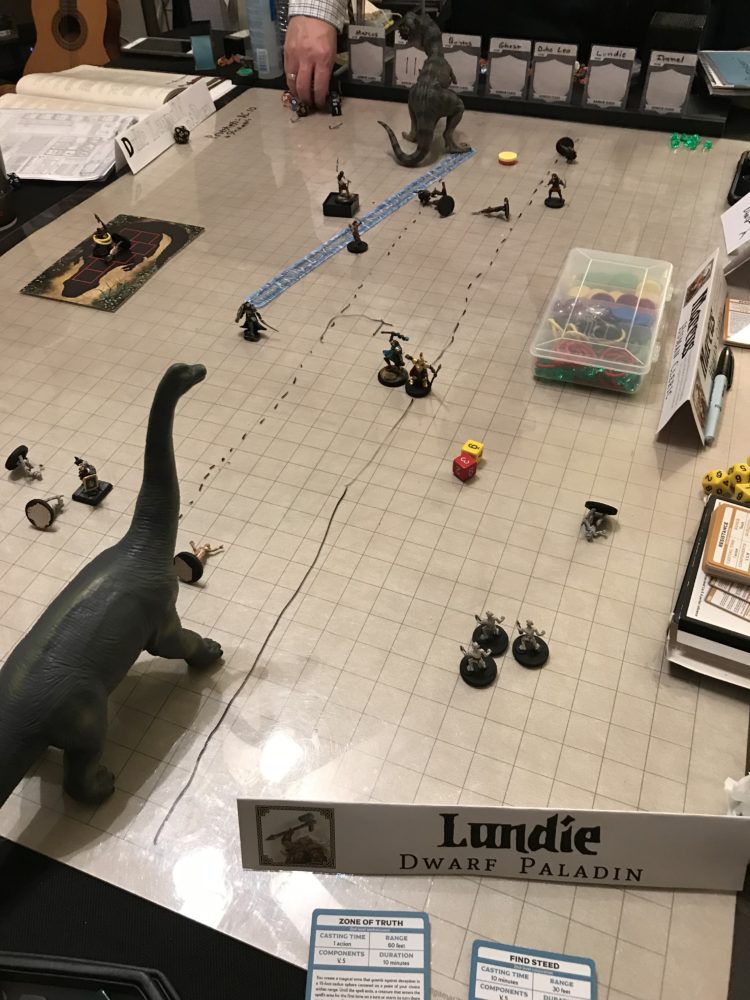 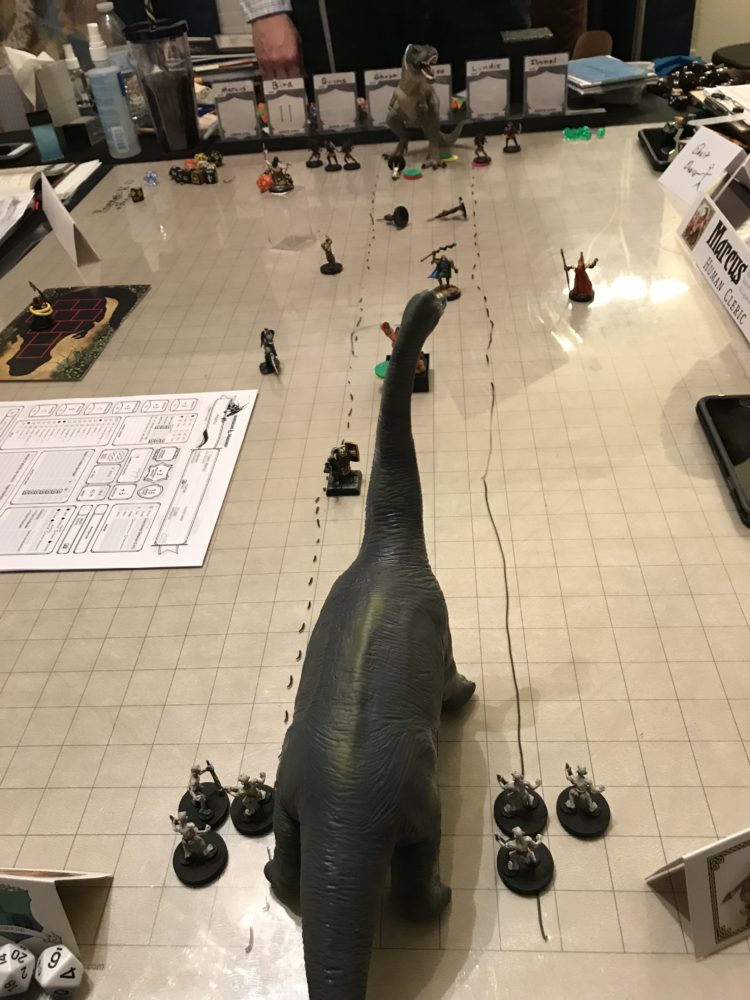 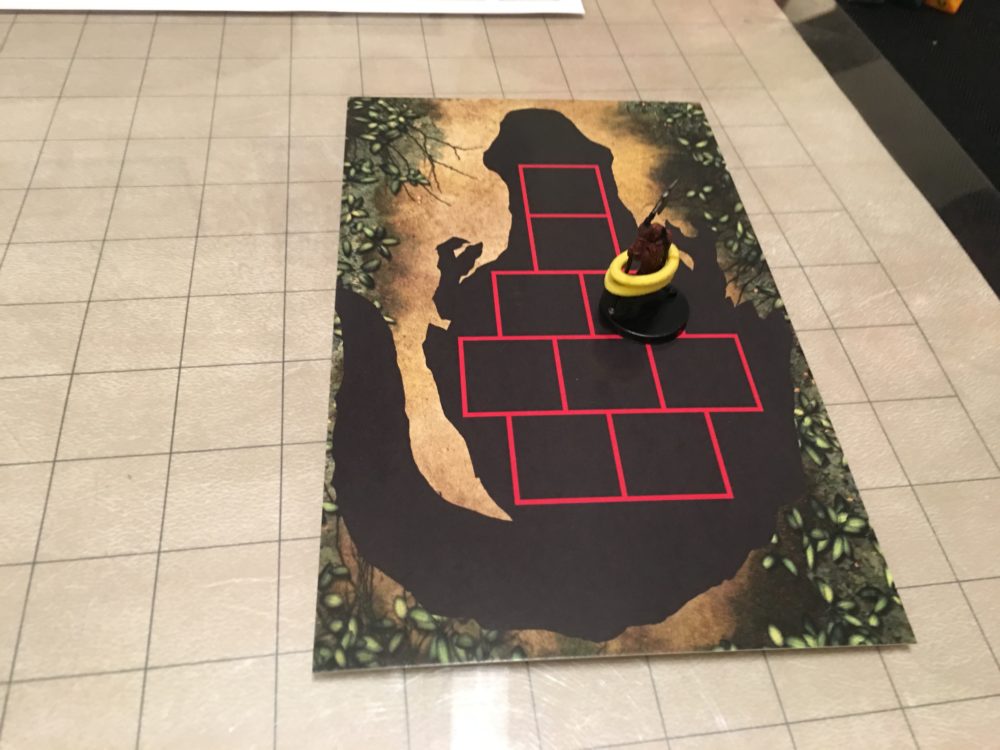 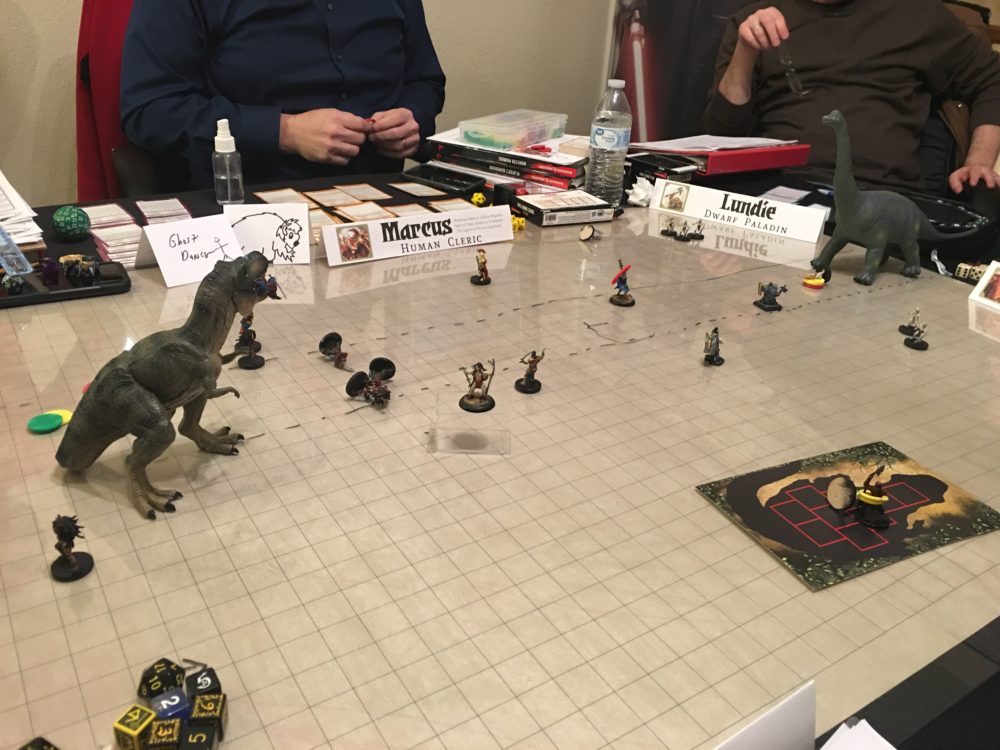 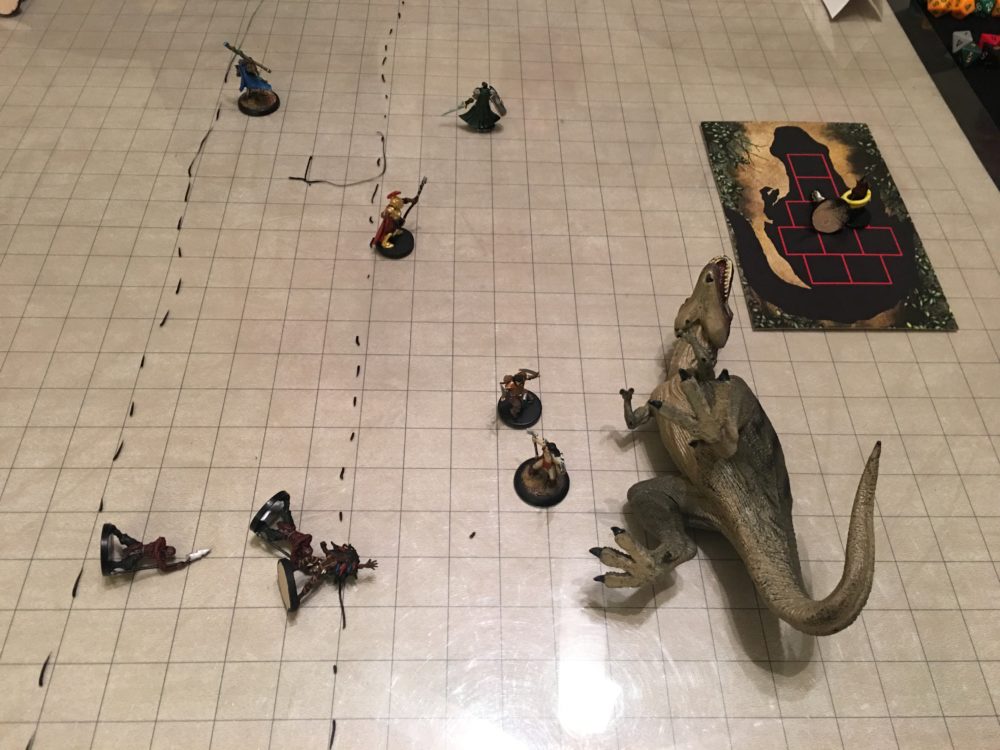 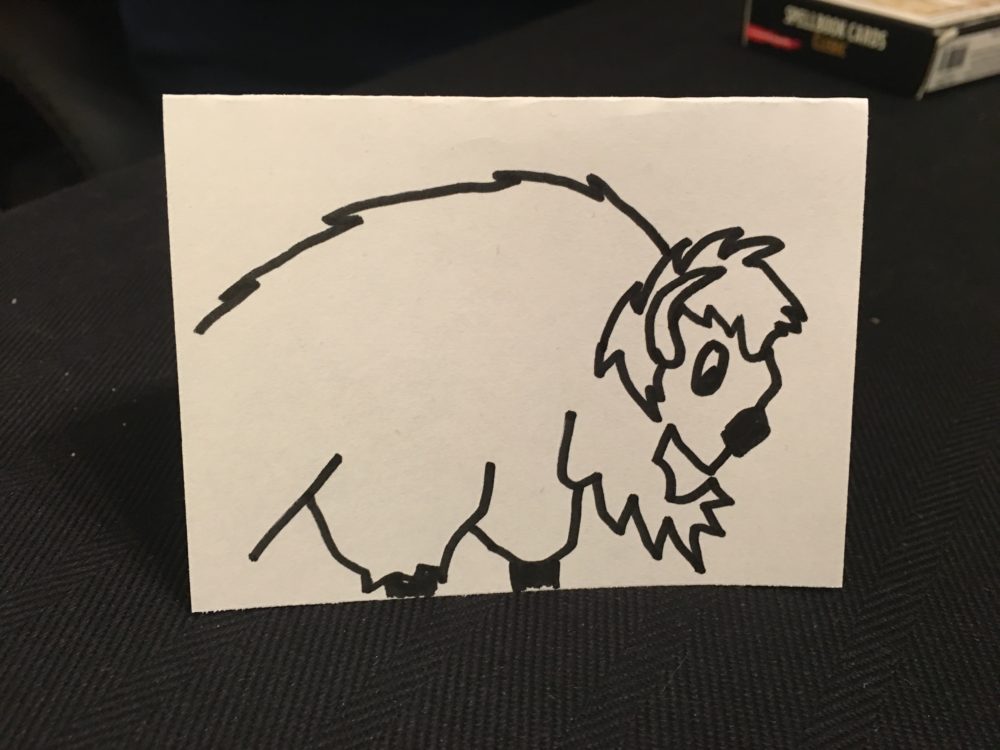