Redmark Session 01: The Die is Cast, Lots of Luck Gives Visions of the Future

It was 1331 on January 26th dawn broke around 7:30am on a chilly but beautiful morning. Our travelers:

They had been traveling together by convenience for some time. Each having a different motivation to head to Nimroth, but all walking with a purpose. During the day protecting each other from bandits and at night sharing stories by the campfire, in such a short period of time they had formed a bond, which is rare in this age.

As they approached about 10 miles from Nimroth, the alert adventurers heard a noise in the deep woods, it was the sound of crying. Marcus rushed down the path in the woods, thinking of a woman in distress in this dangerous place. As the bold adventures rounded the bend, they saw a young woman, a priestess, crying and around her the dead bodies of human mercenaries and orc fifth. As they built trust with the young lady, they asked her what had happened and learned of her sadness because she could not raise her fallen companions. During the discussion Quintos, got that look in his eye, as he approach the young and comely woman with more than intentions of friendship… For a moment Sophia started to calm down… Then… 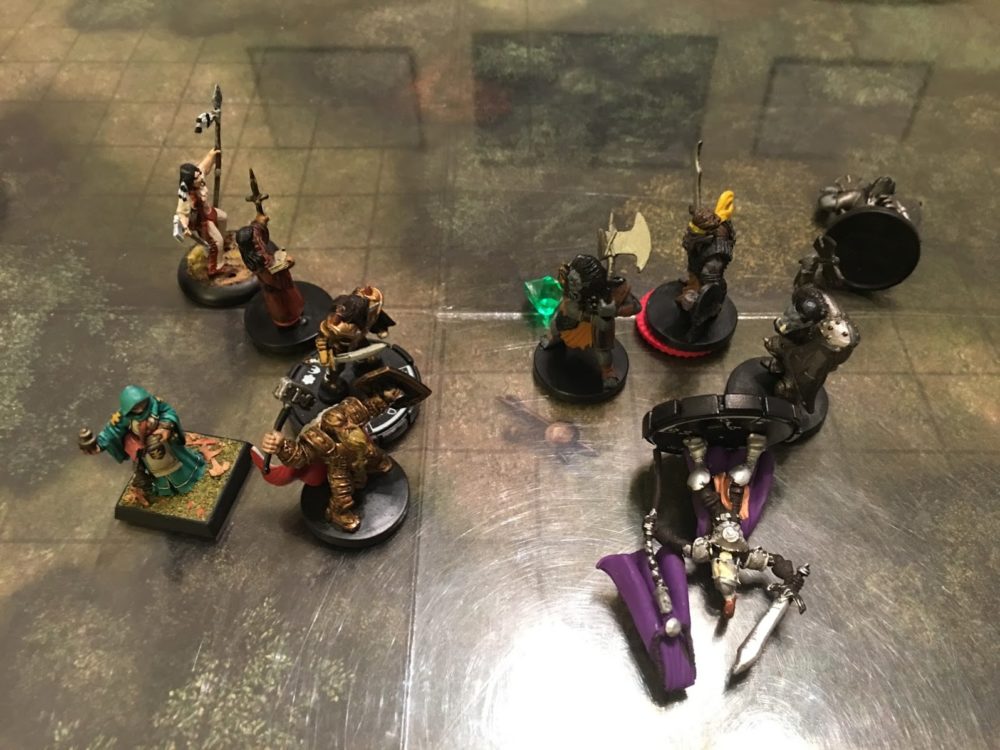 Rounding the bend ahead where an Orc War chief and his 4 Orc warriors.. Blowing a battle horn, they charged into the fray… Our hero’s fought bravely and ultimately defeated the Orcs, however during the battle Marcus rushed in-front of his demoralized friends to protect them and was fallen by the war chief blade.. Lundie the pios dwarf, a paladin of his order brought Marcus back from the touch of the roman death god Viduus as he began to separate Marus’s soul.. Marcus is in Lundie’s debt.. 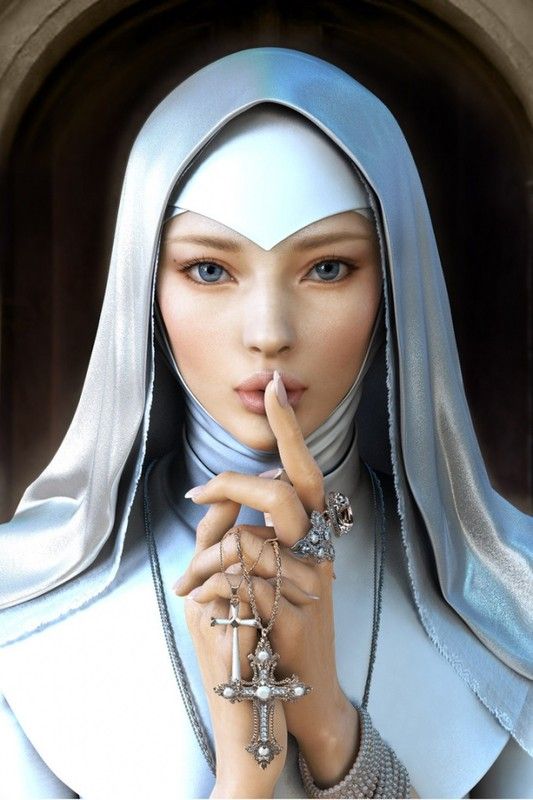 Sophia seems to have a secret — what is it?

After the battle, more comfortable with our heroes as they protected her, or perhaps it was the positive advances of charming Quintos, Sophie shares her mission to go to the shrine of the Lady of the Lots. This place is were she was to receive an augury. Her fallen companions the human mercenaries were to be the ones to help her on the quest…. Or as she said under her voice, could it be these new found heros….

The party travelled some two miles to the mound of the shrine of “Our Lady of the Lots” it was a strange area where the cold melted away to find warmth some 500 feet around this strange mound with an 60 foot long giant egg like structure. Sophia lead the party to the entrance. Once inside we knocked on a door and were introduced to Brother Faldelac and other acolytes of the Lady. The Brother was a strange man, but excited to see Sophia. He then announced we must do an Augury. We must roll the dodecahedron and the nought nought is the number we must seek. It seemed that we would roll these two dice to get the highest score of 100 or nought nought, whomever won all rolls would get the augury from their god the Lady of the Lots..

Next the priest and acolytes of the Lady chanting and marching in unison, proclaimed holding their dice cups to their chests that we must roll. We all seated at different tables and after many rolls, the finalist were selected and ultimately Ivamel (the strange… man?) was selected to receive the Augury. It foretold the following: 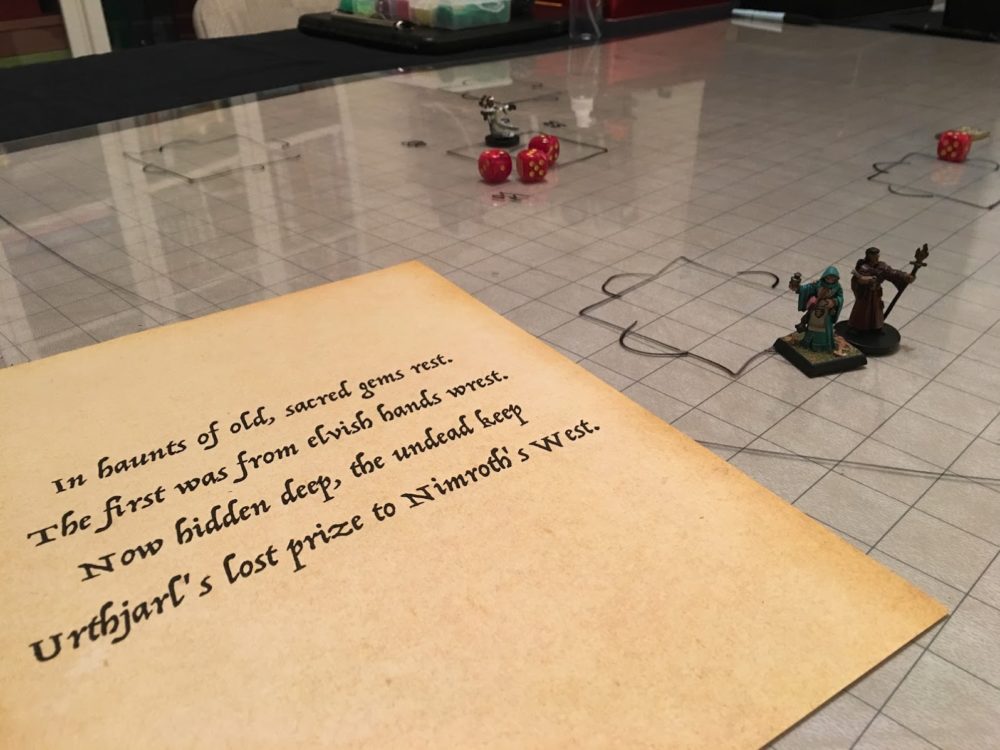 Lots of Luck at ‘Our Lady of the Lots’

This is when Sophia read from the translated page from Enmyr’s codex (from the 2nd Age) which Sophia let you read:

Stormgate was in olden days created as a small stronghold to serve as buffer against the orc territories. During the reign of Elf Chieftain Calismar, this primitive outpost was expanded into a powerful city-state, its walls and towers erected as the final life-work of the famed wizard Urthjarl.

Thus, in the 916th year of the second age, the eight walls of the city were erected in the shape of an octagon — each appeared, formed and sustained purely by the power of magic. To all appearances, these walls are ordinary stone. The power to sustain these walls was wrought into eight gemstones — each implanted into the crown of a large statue of Urthjarl himself.

Against the encroachment of the orc hordes from the east, the elvish kingdoms prevailed for centuries. Then a traitor did what all the vast orc armies had in long centuries not been able to do. Only a skilled master of magic could unwork the crown’s gemstones and unbind its power. In secrecy of night, an insider with sufficient mastery of the arcane stole each gemstone from the statue’s crown.

By the time the night guard was aware of this treachery, the unknown betrayer of the elves had slipped into the stygian darkness of night. The city lasted only minutes after the gems were removed. At the first rays of dawn, the walls crumbled, and an awaiting orc army attacked, destroying the entire Elvish city of Stormgate.

One messenger alone survived to tell their tragic tale. After many bloody battle, with no stronghold to fortify the pass of the Dragonridge mountains, the elves gave way, and Stormgate and the lands west of the mountains were for many generations lost.

An adventuring party of Elves, making their way into the Dreadlands, stumbled upon a orc warrior’s tomb deep within the caves of the Deathbone canyons. There they found one of the stones of the Urthjarl Octagon, and in the dead orc chief’s hand he found a scroll containing clues leading to other of the Urthjarl gemstones.
I, Enmyr, was among this party. Numbering five, we were beset by fell beasts as we made our way back westward towards Inlaness. I alone survived to record these events, my friends’ life-blood spilt by nameless horrors.

The runes from the orc chieftain scroll, the clues we have discovered, and lore such as we uncovered in our ill-fated journey I transcribe here, encoded in ancient Zygannian script, in the hopes those friendly to Elves and their allies may find the gemstones of Urthjarl Octagon.

We must find them, and bring these gems of power to friendly hands. Were they to fall into the control of our enemies, Thrëa would fall into darkness, a dead-man’s land where nameless horrors lope through the night.

After much discussion, the party believed this encounter with the priests was not an ACT OF LUCK, but fate itself and the Lady guiding our future. We decide to help Sophia and her order to protect the people of Thrëa and work to secure the powerful gemstones before the orc can get them all.

So we head some 10 miles to Nimroth to safely return Sophia to her order. We then spend the night at the Minotaur & The Emperor. As Quintos plans to meet with Lord Renaldo tomorrow morning

And so the DIE IS CAST as our heroes begin forge their destiny, given visions from the Lady to save the people of Thrëa…. 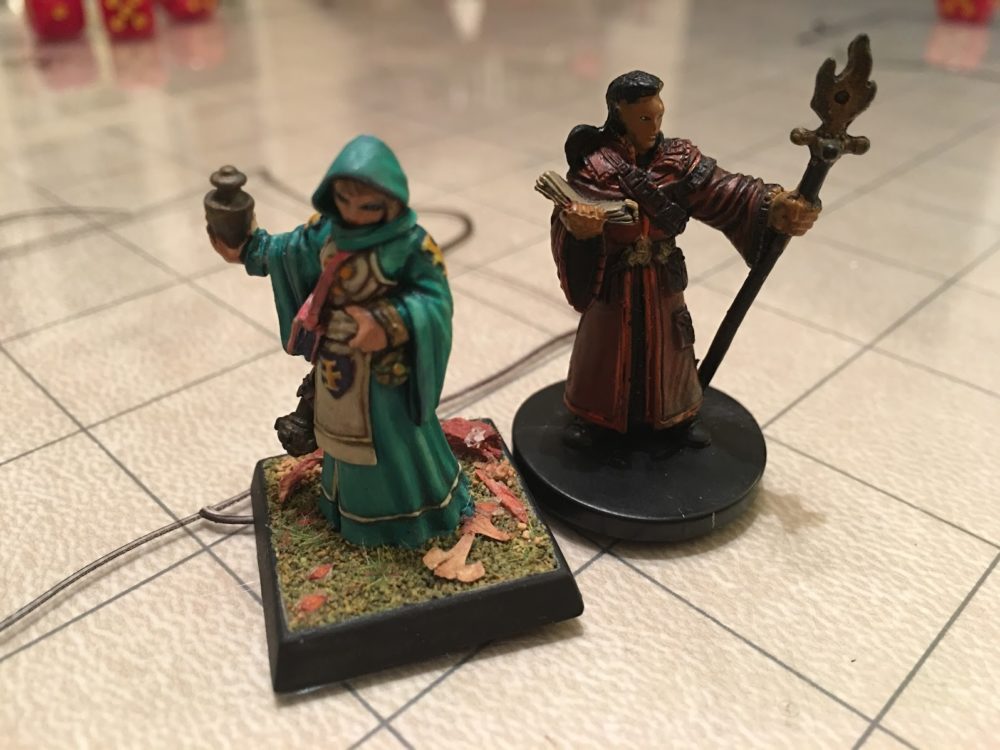