My musings on three products I loved from the 70s which had some likely-not-coincidental cross-over use of drug-dependant albinos and sci fi Beowulf references.

Recently I finished reading ‘Elric of Melniboné’, the first book in the original 6 novel Elric series by Michael Moorcock. Moorcock reads much like Robert E. Howard’s Conan: fast, pulp action, dripping with eldritch wizardry and exotic settings. Elric is the 428th sorcerer-emperor to hold the ruby throne of his kingdom. He is unusually introspective & weak for his race — he is a dependent albino who needs special potions to keep himself alive. He eventually encounters a sentient sword called Stormbringer who give him special strength — but at a cost. 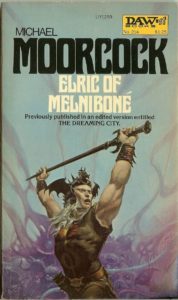 Some have said that if Tolkien epitomizes about half of all fantasy literature, Moorcock is the muse for the other half. In contrast to Tolkien’s Christian take on medieval fantasy, Moorcock gives us a worldview dominated by a nihilism unsullied by concepts of good or evil. Chaos and Law are the only points on the moral compass of the land of Melnibone. In contrast to the Lawful Good D&D alignment of Tolkien’s protagonists, Elric is Chaotic Good on his best days, with descent into Chaotic Evil on occasion. (At least, this is how it seems in the first novel; I haven’t read the rest of the series to see how and if Elric evolves).

Elric does speak about Melniboné’s need to change away from its evil bent:

‘I must go away from Melnibone, Cymoril, for a year. What I have learned in recent months has made me want to travel the Young Kingdoms–see how other nations conduct their affairs. For I think Melnibone must change if she is to survive. She could become a great force for good in the world, for she still has much power.’

‘For good?’ Cymoril was surprised and there was a little alarm in her voice, too. ‘Melnibone has never stood for good or for evil, but for herself and the satisfaction of her desires.’

‘I would see that changed.’

The stories are a larger-than-life and hearken back to the Greek classics, in part due to the direct involvement of self-absorbed, Greek-style gods who are apathetic about the plight of humanity. As one blogger writes:

“In Elric of Melnibone you won’t find hundreds of pages of characters delivering monologue, spanking each other, engaging in lengthy introspection on their internal demons, or a description of every leaf color or market smell. What you will find is a fast-paced, action-laden adventure full of sword fights and sorcerous duels. This story embraces the “Sword & Sorcery” genre, whose modern roots were established by Robert E. Howard with creation of Conan, and who in turn derived it from Greek mythology and Tales of the Arabian Nights. The genre name was coined by Fritz Leiber in an exchange with Moorcock, who wanted a name to define the style. As the popularity of Lord of the Rings grew, by the late 80s and early 90s, Epic Fantasy had caused Sword & Sorcery to become a derogatory term. Many current authors of the “dark genre”, like Abercrombie, Lynch, and others owe some of their roots not only to Sword & Sorcery, but also the anti-hero, a character with flaws. Elric was the first character I read about with serious flaws: the weak strength, the subsistence on drugs, and a naivete that would come back to haunt him.” Source

It was a fun read, and I love the action packed writing style that is so richly evocative. The many ‘deals with the devil’ Elric is willing to make in his pursuit of his enemies are a bit dark for my tastes though.

Beowulf Shaeffer, The Other Albino 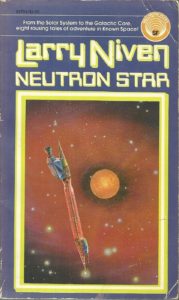 ‘Elric of Melniboné’ came out in 1972, but ‘Neutron Star’ had come out back in 1968. I’m not sure which character was first invented, or if either author influenced the other in creating their drug-dependant, albino anti-heroes, but sure seems like a weird coincidence 🙂

‘Neutron Star’ is a great introduction to Niven’s Known Space setting and introduces many key ideas like Known Space, Outsider Hyperdrive, and the Puppeteers. See my recent post for a recommended reading order for the Ringworld and Known Space series.

I’m now re-reading Ringworld, the next book in the series (it’s actually a couple of centuries after Beowulf Shaeffer’s time with other characters). Niven has written dozens of books in the Known Space settings, so there’s lots to read if you like Beowulf Shaeffer and Niven’s style of hard sci fi in the far-future setting.

Free Trader, The Other Beowulf 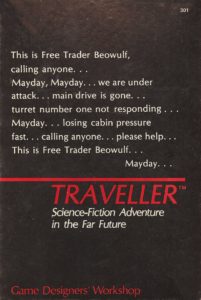 New Beowulf Shaeffer sci fi stories were coming out from 1968 and in a steady stream throughout the 70s. The books were wildly popular. Then in 1977, the Traveller RPG debuted, with the iconic ‘Free Trader’ model spaceship name the ‘Beowulf’. Coincidence? Hmmm. In any case, I know that when I bought the game around 1981 and I saw the name ‘Beowulf’ on the box cover, my first thought was of the Larry Niven Beowulf Shaeffer stories. And that was a good thing: I bought the game 🙂