I’m terribly bad about posting game recaps, but I need to at least do a good job of tracking advancement 🙂 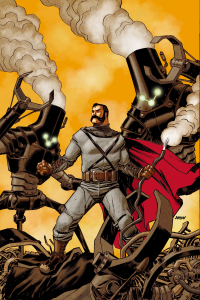 Last week we finished our four game. Our advancement history is as follows:

I’ll try to create a page with dates and better tracking. For now we just have this blog post.

Minor milestones usually occur at the end of a session of play, or when one piece of a story has been resolved.

During a minor milestone, you can choose to do one (and only one) of the following:

Significant milestones usually occur at the end of a scenario or the conclusion of a big plot event (or, when in doubt, at the end of every two or three sessions).

In addition to the benefit of a minor milestone, you also gain both of the following:

A major milestone should only occur when something happens in the campaign that shakes it up a lot—the end of a story arc (or around three scenarios), the death of a main NPC villain, or any other large-scale change that reverberates around your game world.

Achieving a major milestone confers the benefits of a significant milestone and a minor milestone, and all of the following additional options:

During character creation, you organized your skills into a pyramid. You don’t have to stick to that for character advancement.