50 Fathoms: Session 29 and 30- Prelude to War and Battle for Baltimus 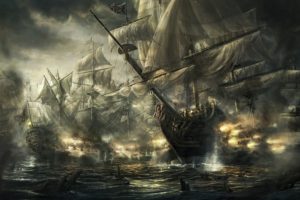 Prelude to War and Battle for Baltimus

The Crew having rested at Azy Kay struck out to find Admiral Duckworth.

While the Admiral didn’t know directly any info regarding the Sword, he thought his spy in Marsales, Enrico de Toledo might. The Crew found Enrico being held captive by thugs and rescued him and his wife. They also discovered that an attack on Baltimus by the Spanish Trading Guild was imminent! The Guild was tired of the ongoing hostilities and decided to end it while they had the upper hand. Enrico had blown his cover and both he and the Crew rushed to tell Duckworth the news. Unfortunately they had to fight their way out of Marsales harbor but make it safely nonetheless. Duckworth immediately set preparations to defend the city and gather ships.

Meanwhile the Crew delivered the chronometer measurements to Daxson’s friend Joshua Goldstein who was very happy for the info. Unfortunately someone was watching his shop and attempted to kill Joshua and steal the prototype and Daxons device. Fortunately they took the wrong piece and did not deal Joshua a mortal wound(with the help of Father Rod). Daxson and Crew were able to track the attacker and discovered Fletcher’s old first mate who blamed Daxon for his near death in the Flotsam sea. Fletcher still held a grudge and might be trouble in the future..

Side mission resolved, the Crew set sail with Duckworth to head off the attacking force. Meeting them in open sea the Admiral and his Fleet waged war for days, causing great loss for the Guild. The Crew of the Liberators Wrath fought bravely and won many decisive victories. They sunk ship, blasted sailors and ultimately turned the tide of the battle. This forced Spanish Guild was forced to retreat with a huge loss of both ships and life.

The Battle was won by the East India Trading Company, but at what cost? Has the balance of power shifted? And why were a group of Kieran Cutters observing the battle from afar?

Onward to find the Sword!