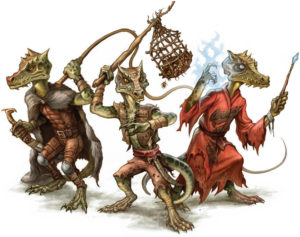 Josiah, Mandella, and Harcourt were among the crew of lumberjacks working hard to fell trees for the lumbermill. Winter was fast approaching and there was no time to waste building shelters. Each had signed up not to cut trees, but to start a new life in the new world. But on an early November morning, with a slight dusting of snow collecting on the leaves of the forest they worked in, suddenly, a party of scaly lizard like creatures burst out of the thicket, chattering and hissing, and attached their party. The soldiers quickly responded, but three went down with spear wounds, and the others wavered against so many. soon, the reptilian creatures rushed the workers, and but burlap sacks over the three workers heads. Each were roughly picked up, and hauled to some distant base. They had been kidnapped.

Our brave colonists responded by forming an expedition, tracking the tracks left on a river trail, until reaching some strange base. On the way, they fought off an ambush of the scaly creatures, with few wounds. When they came upon the Kobold base, it was clear the Kobolds hadn’t built it, but instead whatever predecessor species had come before. Perfectly hewn walls, smooth pillars, this was no Kobold den. The party crept ever inwards, until confronted by fire breathing kobolds. A tough skirmish ensued, but the party was victorious. Looking over the bodies of the three fire breathers, a long, dark hall continued downward. What lay before the colonists? More kobolds, or something worse?