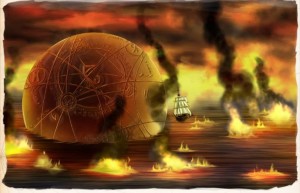 The Crew after much deliberation decided that they had to go after the Kraken Sphere and through the Burning Sea to get it. Navigating the treacherous maze of flames they managed to find the Sphere and not to set their ship ablaze in the process. They find the object covered in a mass of seaweed but towering 200’ above the water. With some effort they recover ropes from nearby wreck and secure it to the ship, the task of towing this huge object before them.

Without warning they are attacked by fiery creatures from below. Half man half reptile and covered in flames. These creatures board the ship and attempt to set it on fire while attacking the Crew. As the crew battle against these fire salamanders, the mass of seaweed covering the Sphere sloughed off and begins to coalesce into a large Seaweed Fiend. Its first action is to grab two of the cannons and pull them off the ship. Crow, thinking quickly, glides to the deck and sets both cannons to fire, unfortunately for the Seaweed Fiend they are both point blank and aimed at his face. The Fiend being blasted into oblivion changes the tide of the battle for our heros and the Crew manages to fights off the fire salamanders and escape the Burning Sea. Fortunately there are healers onboard because Crow was heavily wounded and incapacitated during the battle.

Upon leaving the inferno, they find the colossal Kraken Great Ship waiting for them. They are invited aboard by a host of amazed Kraken and taken to see the great Admiral Caspian. He thanks them for their bravery, listened with fascination to their story and then to the surprise of all the Kranek under his command, gives the Sphere to the Crew. He tells them that the Sphere is a great weapon to be used against the Sea Hags. While its power is great, but he does now know what it will do or how exactly it can help. In order to open the Sphere the Crew will need both an Archmage and a Human to lay hands on the device and agree to some unknown sacrifice. He tells the Crew he will tow the Sphere behind the Great Ship and the Crew can use a magical bone whistle to summon him when the time is ready for it to be used. 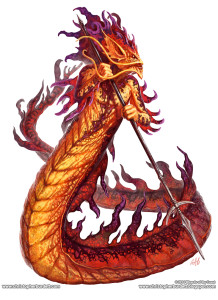 As we are heading for Brigandy Bay, we navigate by the edge of the Burning Sea and encounter a smoldering and badly damaged Kraken Skiff. Aboard we find a burned and dying kraken named Halimas, who with a quiet and wounded breath, tells us we must find an important object in the Burning Sea.

We realize Halimas is a Military Officer, in the Kraken navy and a Captain.

We discuss as a leadership of the mighty Liberator’s Wraith, should we enter the burning sea to secure this vital object. Daxson’s concern over fire, makes our mighty captain deeply concerned of the risk. We have these discussions in private, as so the crew will never see Daxson’s concern. For he is our Captain and shall always be strong in front of the crew.

Finally, after long debate, Daxon agrees to allow me to shift into the beautiful Carroway Screacher and fly over the burning sea to determine distance, confirm the object and even see if we can navigate a course.

During my flight, I locate a path, even though the fire of the burning sea is shifting. In addition, I see a large object some couple of miles in. Covered in moss and battered ships. There are hints of gold beaming out from the wreckage and moss that covers this enormous orb.

Upon my return from the flight over of the burning sea, we discuss as the leaders of the Liberator’s Wraith and agree to nurse Halimas to health. He is an able Captain and Daxon agrees to allow him command the ship in the place of Daxon. We tell the crew that the Kraken captain has experience in entering the burning sea, as he has done so before, as to not tip the crew to Daxon’s fear. Then Captain Daxon goes below deck, as we enter the burning sea, it seems to be allot to handle for our leader.

We all support our captain, his actions have saved our very lives as recently as the last ship battle vs. the Spanish Inquisition ship. We will always support him, as he is our captain.
After navigating through the burning sea, loosely following the path I had just flown just hours before, Halimas safely navigated us to the large golden circle, this supposed weapon of the Kraken empire..

In this area the fire was less intense, and Daxon sensing the ship stopping, fought his fears and came above decks. He and I discussed using his swimming and my gliding to use ropes and tie a tow line around the massive golden orb. We set about our task of securing the orb and completed it quickly.

Once back on the ship, suddenly these burning elementals appeared climbing out of the water itself attacking and killing many of our crew. I quickly flew to the Crow’s nest to fire my musket. They were killing our crew with their violent flames. I yelled the order for the crew to throw water on these foul creatures. As our ship fought to defend their very lives.

Then suddenly as if these deadly flame creatures were not enough. The Moss on the very orb itself formed into a massively large Moss Creature. This creature formed away from the ship, but was over 30 feet high rising out of the water. It then flung moss onto the boat and moss men started to attack. Next it grabbed the cannon’s from our ship in an attempt to rip them from the mooring.

I realized this was our only hope and glided from the crow’s nest to the deck of the ship and lit the very cannon it had in its mossy grasp. Blowing a huge piece out of the creature. Then before it could act, stunned by the very force of the first cannon, I moved to the second and blew the creature into oblivion.

We were all fighting side by side to eliminate these deadly living flames from our ship, one crew, and one purpose. Brave and mighty men of Caribdus battling for the freedom of the world. Then, in the midst of the fight, out of the corner of my eye, I see the new Kraken mage cast a spell on the blade of our Captain Daxon. Daxon’s arms and blades burst into flames, I feared he would panic, but instead in the midst of this burning sea, fighting these burning creatures, with his arms and sword ablaze. The very fear of flames was burned from his soul and he fought with the courage of the great whale to protect his crew. Perhaps cured of his fear of flame.

Then I turned and saw our crew, many dead at the hands of these flaming demons. And I started to fight these flaming beasts for our very lives. As I acrobatically dove into the fight, one of the flaming elementals continued to challenge me at every turn, I could not avoid him and finally I was lost. As I passed out from the pain and the flames, I dreamed is this my end… I just died after my dear friend and mentor Captain Liam.

Then suddenly, I awoke at the hands of Father Rodrigo, who heals me with his pure waters and brings me back from near death. All was quite the flaming creatures were no more.
So in my weakened state, I helped the Captain to successfully navigate out of the burning sea. It seems something changed inside Daxon this day. Seemly no longer concerned with the flaming waters.

Upon our exit within a short period of time we see the Great Kraken Ship on the Horizon. We are invited aboard and meet the mighty leader Admiral Caspian of the Kraken. After a long discussion, he realizes we have the same cause to cure this land of the curse of the Hags and lower the waters. He agrees to puts the mighty Kraken weapon in our control. Huzzah! One more piece in the puzzle to defeat the hags. Once again tested and we pass the ordeal of fire.

Being you have already been made aware of the events which transpired regarding the Sphere’s retrieval, I will discuss my thoughts on my new crew within this report.

One of the most striking characteristics of the crew is their resilience.  It is most notable in their handling of the recent loss of their captain.  He was, from all accounts, a most capable and extraordinary man who the crew depended on heavily.  To be sure, the crew as a whole is full of such men.  Yet, they are not the captain and to lose such a captain amidst the great struggle they were in has broken lesser crews.  Those of the Liberator’s Wrath, however, still stand as unified and determined as they ever were.

Their new captain, Daxson, is proving rather capable.  His willingness to seek and truly consider the counsel of his officers is commendable.  Mordecai and Rodrigo have surprising magical talent for individuals not native to Caribdus.  Kadian, the Atani you met, is a Shiani and practices an extremely rare form of magic gifted to such.  My impression is the Shiani are a rare kind of holy warrior.  I intend to make extensive notes of my observations of his magic for further study.  I will include these notes with my reports for our mages.  Even Brachus, the ships super, is atypical for his species in his apparent overcoming of the greed which is so prevalent among the Scrurillians.  Perhaps the theory that greed was an inherent characteristic of the species is in correct.  Given my familial link to these creatures, I am most intrigued by Brachus and his attachment to this crew, and shall make further study.

I must confess, High Admiral, that some recent actions of mine have potentially damaged my position with this crew.  As you have advised, I have been cautious in the use of magic around new crews.  Unfortunately, I was forced to take action which resulted in the death of several crew members.  While I am confident it was the right choice, the crew will not likely agree.  Hopefully, reason will trump emotion and I may continue serving as a member of this crew.  If events go unfavorably for me, I will strive, as always, to continue the great mission to the best of my abilities.

Kaliferous, Archmage of the Kraken fleet