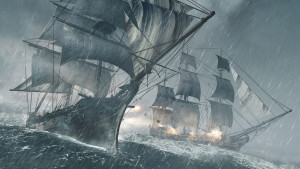 After the loss of the Captain, with no time to regroup the Crew set sail in an attempt to avoid the Galleon which is bearing down on them. While a good attempt was made, the ship was spotted by and marked with a light spell from the enemy. The Crew managed to put up a fight and fired chain shot at the Inquisition ship to slow it down. After a furious exchange of cannon fire the Liberators Wrath was seriously damaged, but managed to slip away. As a fog bank descended on the sea the Crew fired one last departing volley and with a spectacular explosion the Galleon was no more.

Without further drama the Crew set sail to Kiera, repaired and then departed for Brigandy Bay. Along the way they stumbled across a sunken ruin which they looted and on the edge of the Burning Sea a badly damaged Kraken Skiff. Aboard they find a burned and dying kraken named Halimas who tells them they must find an important object in the Burning Sea.

What is this object? Is it important enough to risk their ship and their crew again? 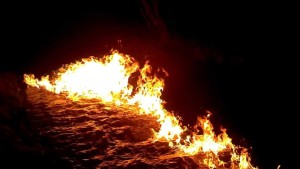 At the orders of Captain Daxon, I worked to get the rigging and sails unfurled. We are on the move. Then I looked to the sky and saw Liam my surrogate father and mentor being clutched in the Rocs talons fighting fiercely as he was carried north towards the mountain peaks.

The Captain is dead, long live the Captain. His bravery will last in us all forever.

We did not have time to honor him, as we should have done that will come later. But his blade fell to the deck, I asked Daxon if I could carry it. As we carry the spirit of Liam. Daxon honored me by allowing it. At that moment, sadness at the loss of the man and happiness to have known him and the bravery he has shown to save our Caribdus.

No time for more thoughts of the captain as an Inquisition Galleon was bearing down on us at an amazing speed.

At Captain Daxon’s orders we worked to evade quickly away, then in a moment we were illuminated by a blinding light. A mage had flown over to our ship an cast a light spell. We fired arrows and cast spells at the mage to get him to evade. Then Inquisition Galleon fired upon us, striking the ship, all of us crew wonder would she hold, would the Liberators Wrath take the round. She was wounded but we kept moving. We then returned fire furiously targeting the sails of the Galleon, working to slow down the advance of the larger ship. Then fire hit the back decks, the Captain froze, we knew of his fear of flame. But as a family and crew we helped the captain, Father Rodrego putting out the fire and I barked orders to the crew to keep firing at the sales of our enemy.

Then Daxon snapped back when the flames died down and he masterfully captained us to a major victory. As we were slipping away, a fog bank descended we fired one last departing volley and with a spectacular explosion the Galleon was no more. Huzza!!

We set sail to Kiera, for repairs. But on the way, we honored Captain Liam and had drinks in his honor. We all said kind words for the heroic leader and mentor.

After repairs at Kiera, we then departed for Brigandy Bay. Along the way they stumbled across a sunken ruin which they looted and on the edge of the Burning Sea a badly damaged Kraken Skiff. Aboard they find a burned and dying kraken named Halimas who tells them they must find an important object in the Burning Sea.