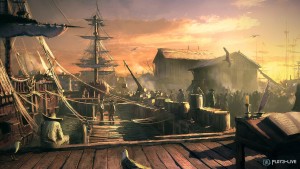 The Crew head to Brigandy Bay to repair, rest up and setup some trading deals. Upon arrival Daxson and Crow they attempt to talk to their smuggling contact Saricks who works for the Coalition and operates out of the Black Queen. Upon entering the Queen they are stopped and told the Coalition wants to speak with them. They manage to speak with Saricks but are not allowed to leave the Queen without a bar fight with a Graul and two Half Ugak bouncers.

Father Rod, Mordecai and Kukukachoo setup the standard Soup Kitchen but are attacked from a mysterious robed figure and several henchmen.  They manage to take out the henchmen and attempt to capture the robed figure who turns into a bat and flies away. They find all the henchmen have a red blood drop tattoo on their body leading to more questions than answers.

Heading back to the ship the Crew wisely set up a watch rotation and find themselves attacked yet again by the Kehana Crimson Sparrow and his crew. (GM note: Crimson Sparrow was one of the slaver leaders of Jomba Town who escaped because Bracus was being greedy). Sparrow managed to slip on board and attack Daxson but proved no match for Daxons skills. Overall the pirate attack was repelled but not without some bloodshed

It seems Brigandy Bay is no longer a safe place. Has the Crew made too many enemies? Where else does danger lie? 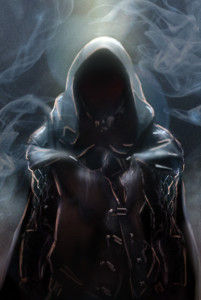 We recently made port at Brigandy Bay.  The crew has had previous dealings with the local smuggler king, Sarricks, and believed he might have useful information.  Having no previous involvement with Sarricks, I chose to accompany the other crewmen.  I was also very curious about their plans.  It turns out Father Rodrigo is the one setting up these soup “kitchens” I’ve heard rumors of.

The experience was interesting.  Many came to be fed.  Few were noticeably impacted beyond temporary satiation.  In my opinion, little of substance was accomplished.  Notably, the crew was rather supportive of the effort despite this.

The most significant moment of these last few days was the attack against us while Rodrigo was working his kitchen.  The only detail that is of import is the strange entities that attacked.  One escaped by transforming into a bat and flying away.  As you know, this is odd.  Changing one’s shape is almost unheard of.  I only recently learned shapechanging was even possible through Kadian, who swears our attackers used magic different from his.

The humans in our group fear they are an evil creature from their world known as vampires, who are the work of the devil.  Their descriptions were rather vague and decidedly unacademic.  This leads me to believe the humans have made no official or concerted effort to study vampires.  As such, all I can say with certainty about them is they use magic and can shapechange.  If they are indeed purely evil as the humans claim, I recommend we make what effort we can to eradicate them before they become a larger problem.
Kaliferous, Archmage of the Kraken fleet

Back in Brigandy Bay and Brigands All around

– Through the Eyes of a Crow

Seeing the Great Kraken Ship with the gleaming gold ball edge over the Horizon.  I am beaming with pride.  What a great experience, we met the mighty leader Admiral Caspian of the Kraken.  Earned his trust and we have the mighty Kraken weapon in our control.  Huzzah!  One more piece in the puzzle to defeat the hags.  Once again tested and we pass the ordeal of fire.

So again we are on our way to Brigandy Bay.  After docking Captain Daxson tells me to come along as we are heading to our smuggling contact Saricks who works for the Coalition and operates out of the Black Queen.

Upon entering a crazy human bartender seems to act out of dis-respect to our captain and his crew.  She tells us with indifference we can’t see him and we must wait in the bar.  And we wait for much too long, finally the Captain and I turn to leave.  But we are blocked at the door, by a Graul and two Half Ugak brothers.  This was their mistake.  We use agility and skill, not to kill them, but cleanly get past them and head to the ship.  Latter I fly into Saricks room as carroway screecher and deliver a message to Saricks to meet us.

Back on the ship, we find out that Father Rod, Mordecai and Kukukachoo setup the standard Soup Kitchen but are attacked from a mysterious robed figure and several henchmen.  They claimed a crazy robed figure who turned into a bat and flies away. I found that hard to believe.  But I guess, I can change into a caraway screeacher, maybe there are creatures like me out there.  Hmmmm
Heading back to the ship, I asked the captain should I double the watch and he agreed.  So we set up a watch rotation and found ourselves attacked yet again by the Kehana Crimson Sparrow and his crew.  Sparrow managed to slip on board and attack Captain Daxson, but proved no match for Daxons skills.  I fought bravely on the deck and helped repel the foul pirates.  It seems that Brigandy Bay earns it’s namesake that there are Brigands all around.