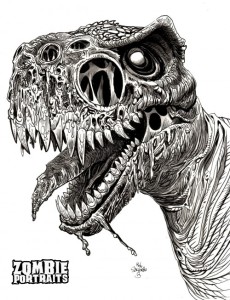 The crew wrapped up business in New Madrid and prepared to head out for Petes Mystery Island. The night before they were set to depart, Father Rodrigo had an assassination attempt while he slept. He managed to fend off one assassin but another wounded him and had the upper hand. He was saved by a fire mage and two warriors who identified themselves as with the Torquemada. On the assassin’s body they found the assassination order with the Cardinals seal, implicating him and the church.

Heading out to sea the crew made good time to Pete’s Treasure Island. They found the island peaceful enough and after a long climb up a treacherous cliff face and a few hours hike through thick jungle they finally found the hidden location. It was an old hunting fortification left unguarded. In the treasure chests they found a wealth of Gold, two enhanced firearms, a mysterious golden triangle and a strange locked wooden box.

Upon touching the loot they heard a roar off in jungle and quickly made plans to leave. Before they could do so, they were waylaid by a troupe of zombies who rushed the ruined fortification. They fended off the zombies while a large Zombie Tyrex (T-Rex) stalked in the jungle around the encampment. The Tyrex made his move when Crow exposed himself to a set of double doors and attempted to have a little snack, unsuccessful the Tyrex stalked back into the Jungle and disappeared.

The crew opened the wooden chest and found it had a shrunken skull in it. When Mordecai touched the head he received a vision of a powerful archmage sacrificing his life to defeat the Hags. He put his essence in the head to be used as a weapon against them someday.

After waiting a while and resting, the crew made their escape to the ship but were ambushed by more zombies slowing them down. The Tyrex chose to attack now that his prey were in the open. With a vicious snap of his massive jaw, he went after Liam who was holding the box with the skull. He severely wounded Liam leaving a tooth stuck in his skull. After a deadly fight on open ground with the Tyrex, Brachus finally managed to pierce his thick hide and sever his heart. As the menevolant spirit of the Tyrex left his rotting body, a greenish black smoke filled the air. In this cloud of vapors the crew heard the screams of three women and the rotted and evil faces of the Hags glaring down with pure hatred.

Loaded down with loot and some mysterious artifacts…what will the heroes do next? 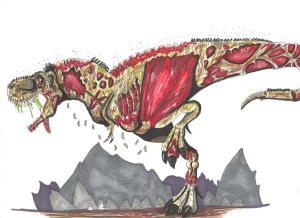 The Epistle of James was our favorite, and I retreat to it in times of need. I am reminded of Chapter 1 verse 22-24

But be ye doers of the word, and not hearers only, deceiving your own selves. For if any be a hearer of the word, and not a doer, he is like unto a man beholding his natural face in a glass: for he beholdeth himself, and goeth his way, and straightway forgetteth what manner of man he was.

Abuela, Saint James is always a comfort to me in these days, and I listen. The man in rags is exalted, and the rich man made low. Cardinal Torres in his fine silks should open the Epistle of James every now and then, but he has long since stopped listening. A pity.

Because he is beset by men of energy and deception. The Englishman Hawkins is one of them. You told me that Englishmen were never to be trusted, and I saw that first hand. I was ambushed, nee, nearly assassinated, when luck would have it, Hawkins was there to retrieve my fate. What a coincidence. Unfortunately for Hawkins, it is a trite and well worn tactic of the real Inquisition to set up a false savior, a friend, to try and pull one his way. Hawkins could have warned me of the upcoming attack at any time, except that he wanted it to happen, to “save” me. Again, I am Jesuit, and on my path alone. I will feign trust of this Hawkins, but only to discover his true depravity, to get to the heart of matters.

And Abuela, we fought the undead, including the largest beast I have ever seen out of water. And it was undead. The crab man fought with distinction, as if our Lord walked with him. Perhaps you were right, and more than man has that divine spark. All I know is that the wonders you described are come to pass, and I trust, as you said to me, that there is a way home.

Finishing our business in New Madrid, we set out for the yet undisclosed location of Stumpy’s treasure. There was still some obvious trepidation about the whole thing among the crew. Mostly from Daxson, but once we finally got to the island the excitement began to build.

The island was quite interesting. Given it’s geography, I’d say it was an ancient volcano. I’m no expert on such things, though. So take that with a grain of salt. The initial climb proved to be a challenge for a few. If not for Brachus’ willingness to strap old Stumpy to his back, we might have been forced to leave him behind. Good thing we made it work, too. His directions held true and we came to some old ruins where, as promised, rested a buried treasure. Among it all was some shrunken head. According to our magic wielding friends, it’s the head of some ancient master wizard or some such.

Not long after the find, we were in a mess of trouble. Some old undead buggers rushed us. By themselves, they’d be bad enough. But some blasted undead monstrosity was with’em. We fought our way through well enough and made straight for the ship. We didn’t get far before they were back on us. It’s here where my memory gets a little fuzzy. I remember the giant beastie picking me out of the crowd. It was as if he had some personal score to settle. I remember him charging, yelling and spitting all over me, and then the sensation of flying. I had about enough time to note how odd it was he seemed to focus on me and then blacked out when I hit something. Or something hit me. When I came to the fight was over. I’m told Brachus unleashed hell’s furry on the thing and clawed it’s heart right out of it’s chest. All in all it appears the whole crew performed admirably. I’ll be sure to by’em all a round when we next make port. For my part, bravery earned me a fine scar atop my head and one of the blasted beast teeth, which had lodged itself in my skull. I think I’ll make a sword handle or something out of it.

After giving the entire series of events some thought, I believe that bastard of a creature somehow knew I had that bloody shrunken head. The only reason I had it was because I had to take it from Crow. He wouldn’t leave the blasted thing alone and fooling with things like that always leads to trouble. I suppose it’s best I had it. As part of my crew, Crow is my responsibility and I’ll not let his foolishness and lack of discipline kill him before his time. He be a good lad with to much potential to just let him dig his own grave. Though, if I can’t instill some discipline or self control into the lad soon, he’ll be the death of me. Or all of us. Perhaps it’s time I start taking some more stern disciplinary actions with the lad. He’s got to learn the consequences of his actions are more far reaching than he realizes.