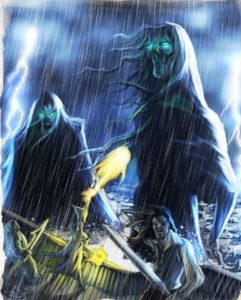 The Crew spent time mourning the loss of the friend Mordecai, gathering support, talking to their allies and finally meeting up with Admiral Duckworth and the Kraken Great ship.

They met up with Duckworth who pledged his support and then called for Admiral Caspian with the bone whistle. The Great Ship arrived and was still towing the Sphere, to which was handed over to the Crew.

Kal and Rodrigo placed their hands on the Sphere and found themselves transported inside the hollow object. Here they faced the four elemental Spirits: water, earth, fire and air. They discovered that the Kraken had imprisoned them long ago to harness elemental magic. The elements would lend their power against the Hag’s but with two conditions: 1) No more mages nor new magical abilities given 2) the doorway between Caribdus and Earth would be sealed. Both of our heros agreed to the  bargain, but Rodrigo did so with a heavy heart. His one true goal was to see his Abula again.

Finally ready to face the Hags the Crew set sail with the following allies and their ships:

The proud fleet sailed directly towards Devil’s Cross, with Daxson leading they skillfully and carefully picked their way across the treacherous Flotsam Sea. Along the way they found a frigate, the Donna Briann, being pulled into a massive Whirlpool. They saved the ship by towing it out of the whirlpool. Grateful, Captain McCoy then pledged his ship to help them fight the Hags.

Reaching the outer border of the Devil’s Cross, the Fleet had to face a powerful ring of massive protective storm. This storm didn’t move outward, but had the force of a hurricane as it swirled around the Devil’s Cross constantly. The Fleet spent hours fighting the storm trying to sail true and managed to burst through the storm wall and into its eye, Devil’s Cross itself. Many ships were damaged on the trip and two smaller escort vessels lost at sea, but they finally made it! The first difficult task was now complete.

Surprisingly the waters were calm and peaceful and they sailed undisturbed into the middle of the ‘Cross. Steeling themselves, they spoke the Hags name out loud: Maka, Mala, and Mana and poured the Earth water in the sea. Suddenly, the illusion of peacefulness was broken, below the waves it revealed a rotten waterlogged Ograpog with massive hordes of Octopons and zombies. The weather turned foul as the three Hags burst out of the water 60’ above the waves. These horrible undead creatures loomed over the ships and began to laugh and cheer with glee. They knew of the Crew and mocked at their seemingly  foolish attempt to stop them. With the illusion removed, the Crew spotted a portal hovering in the air, Earth seen clearly on the other side and huge volumes of water were pouring through the rift. At the middle a tortured Maiden was magically bound to it and screaming for help.

The battle was now underway! The Hags called forth lightning and attacked the Fleet. The Crew quickly activated the Kraken Sphere but for some time nothing happened. Luckily they still had the Water Dragon orb which they used to summon forth a fully grown 40’ Sea Dragon. This Dragon seemed be driven with a keen intelligence and the Crew sensed the soul of their friend Mordecai as the beast brutally attacked the Hags. Finally seeing something as a threat the Hags attention was diverted from the ships and to dealing with the new Dragon threat.

Meanwhile, Kal noticed the Sword of King Amemnus was being pulled and pulsing downwards to the sea bottom. Heading the suggestion, both Kal and Daxon leaped in the water facing hordes of Octopons, Sharks and Giant Octopus as they let the Sword draw them ever downwards. They fought their way down while hordes of creatures surged towards the surface the duo did their best to gut and maim their enemies along the way. Daxon’s keen eye spotted a massive Octopus making its way towards the Liberators Wrath and he skillfully gutted the beast and saving the ship from a massive attack.

On the surface the battle raged on. Father Rodrigo fended off Octopon borders all the while focusing his magical attacks on the Hags. The combined might of Rodrigo and the Dragon brought the first Hag, Mala, down with an explosion of putrid flesh and bones. However things looked grim as the full might of the Octopon reinforcements made their way to the surface. Every ship of the Fleet was overwhelmed with the sheer number of vile creatures.

However an unexpected ally arrived, the Kaumatua Warriors from Jomba Town arrived with their Maori Grual leader Eti in the lead! Unknown to Daxon, his love Annie Mason quickly repaired her ship, met up with the Warriors and agreed to tow them through the storm. These warriors surged towards overwhelmed ships and lent their marital aid. They rowed their long boats screaming their Haka war chant as they leapt into battle.

Beneath the surface Kal and Daxon found themselves in what had been the palace square  and spotted at a beautiful golden statue depicting a Masaquani, Kehana, Kraken, Atani, Grael, and Doreen together in sign of peace.  The hand of the masaquani looked like it was missing a sword, to which Kal quickly placed the Sword of King Amemnus. The Sword burst forth with a white light that speared through the water and struck the Hags, dissipating their sickly green magical armor. The Sword now pulsed with a white magical light and seemed to yearn to be taken into Battle! The duo now made their way to the surface.

With two Hags still alive and causing havoc the Fleet was struggling to combine their fire and deal with the undead and Octopon borders. Father Rod and the Dragon turned their attention to the closest Hag, but another ally joined the battle. An Atani airship flew into the Cross using some sort of magical energy drawn from Crows Elder tree! The flying ship blasted one of the Hags causing it to stumble back. At the same moment a torrent of air, water, fire and earth shot up. The Kraken Sphere had finally activated! The four elements formed into a massive ‘Terrormental’ which completely obliterated the 2nd Hag- Mana  .

Enraged by the loss of her two sister, Maka Mallus, the final Hag, screamed and ripped the wings off of the Dragon and crushing it beneath her feet. Rodrigo struck out at the Hag causing her to weaken. At this moment Kaliferous and Daxon emerged from the water with the empowered Sword. Kal deftly stuck at Maka dealing the final blow and ending the Hag menace forever.

With the death of their masters the Octopons dissolved into a black ooze revealing the tortured body of  trapped Masaquani. The weather cleared and the water lost its sickly hue.

The portal to Earth and its torrent of water slowly closes as the Maiden was freed, but a small vessel slipped through the crack at the last moment.

The Maiden came forward and thanked the Crew, telling them that Hags were using her Portal to Earth to flood Caribdus and were recently using her to try and find a way to Earth itself. The Maiden then made a deal with the Elementals to bring land to this sunken world in an attempt to bring balance back to Caribdus. She faded away thanking the Crew for their hardship and effort.

Not only did the Crew save Caribdus but they also kept the Hags from harming another world as well.

While the Crew celebrated their hard won victory, Father Rodrigo peered into the vessel that had slipped into this world at the last moment. He found his lovely Abuela sitting on the deck smiling at him.

With both worlds saved and the land changing beneath them what further adventures will the Crew find for themselves?

Tis a bitter sweet ending to the tale. Many friends were lost- Liam, Crow and Mordecai. They died protecting the world and the future.

In the end, when the Hags fell the ever present storm cleared and the sun shown down on the Flotsam Sea for the first time in thirteen years, hope rises again. 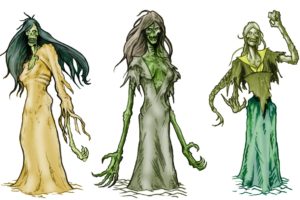 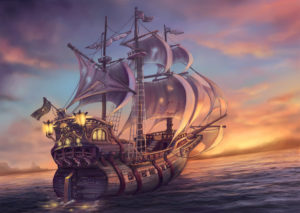