I’m currently playing with the upcoming QuestWorlds RPG. You can check out the free SRD of the game here. It has a really interesting narrative mechanic that dates back around 20 years. Originally it was a game called Hero Wars, then was renamed HeroQuest, and now finally renamed QuestWorlds (so as to not be confused with the HeroQuest board game of the same name). (You can also find more about QuestWorlds here and here.)

Characters create a list of abilities which are free-form text descriptions similar to Aspects in the Fate RPG. Unlike Fate, there is not a lot of Aspect creation and tracking, so the game runs really quickly.

The core mechanic is to roll less than or equal to your ability score. If you succeed, you gain one success. Rolling a 1 or a 20 is similar to old-school D&D and generates not a critical success or failure, but adds (or subtracts) 1 success. You compare your number of success versus your opponent, and consult a short, easy-to-memorize table which dictates the outcome (very similar to succeed/mixed success/failure outcome range of Powered-by-the-Apocalypse games).

Abilities can be rated higher than 20. Once you hit 20, and each increment of 20 above that, you are considered to have a Mastery.  The symbol for a mastery depends on the setting (it could be a rune symbol for example, as was the case in HeroQuest Glorantha). In this case, I’ll use a capital letter ‘M’ to indicate a mastery level.

An ability rated 13 to 19 simply lists that number. 20 is also listed as 20. 21 to 39 is marked as 1M  to 19M (the number in front is still the target number on a d20 roll, but the ‘M’ indicates 1 mastery, which counts as 1 automatic success). If you have 2 or more masteries, you note the number of masteries after the mastery symbol. For example, a 13M3 means you have 3 masteries and would roll less than or equal to 13 to check for an an additional success (and natural 1’s and 20’s also still apply).

The game promises to be fast, has the amazing narrative freedom of Fate, and handles mundane characters as well as superheroes with equal ease. 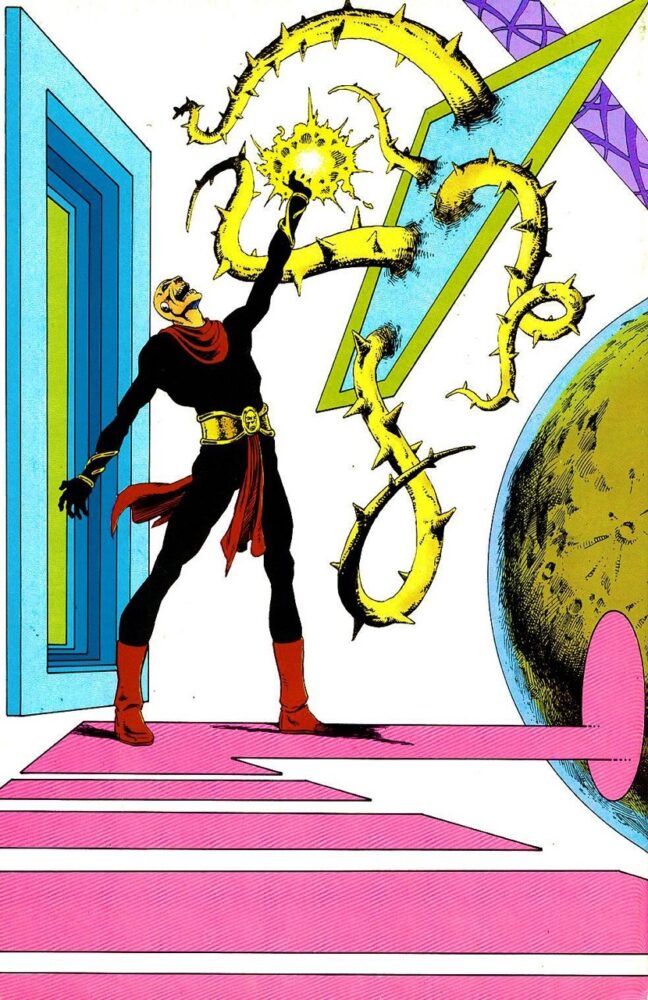 Here is  an example set of character generation rules I used to create Syzygy Darklock (see below) from a play-by-post game I’m checking out.

Flaws: Horrible Visage 3M
Essential Belongings: Staff (focus item), holo-picture of dead wife, temperature-regulating skinsuit
Hero Points: 1
Experience: 0
Background and Description: Discerning that fate had chosen him for some grand future quest, Syzygy Darklock, in order to prepare himself for this future labor, sought to gain vast powers by tapping into extra dimensional energies. These powers cost him an eye, an arm, two legs and the woman he loved. Cybernetics replaced four of his losses. Syzygy is gaunt and has a horrid, skull-like face and an artificial eye. While difficult to look at, his keen intellect, iron wit, and generous heart generally win him friends over time.

And here is the same character in concise OSR style format.