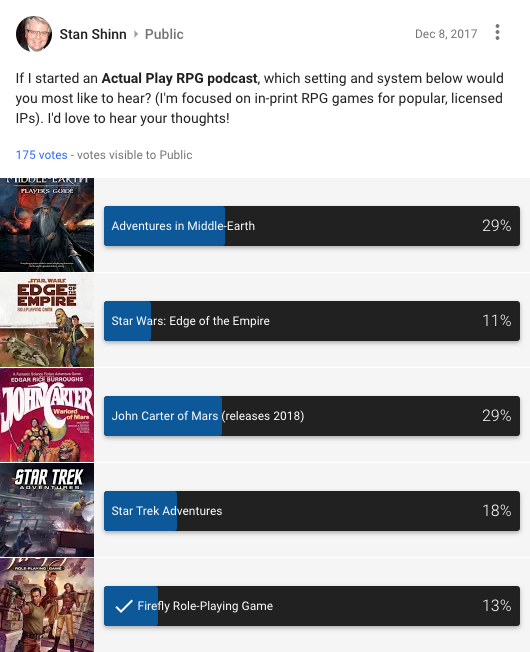 In my Thursday group we starting talking about doing an actual play podcast. 24 hours after I put up the poll on licensed RPG settings, we’ve gotten some good response! 175 votes as of me writing this post.

We’ll have a dribble of extra votes over the next week I’d think, but most of the response is in at this point.

Here are my observations along with some commentary about the viability of doing an actual play podcast campaigns of the top settings.

Star Wars scored last. I’m thinking this is partly due to the crowded Star Wars podcasting space (there are multiple FFG Star Wars actual play podcasts out there), and maybe partly due to the system (my personal polling shows about as many people play or prefer the older d6 system than the newer FFG system; not everyone responded well to the new rules), and partly due to franchise fatigue (so many movies, cartoons, novels, etc., that you’re got your fix already).

Firefly was second-to-last. Still a beloved setting which I would not mind taking for a spin. Its following has never risen to the level of Star Trek, Star Wars, and Middle-earth fan-bases.

Now on to the top three and what it means for us.

Adventures in Middle-earth was tied for first place. That it would be in the first slot didn’t surprise me. What totally surprised me is that it was tied with a game not yet released!

John Carter of Mars had the same votes as Adventures in Middle-earth. Why so popular? I suspect it’s because of (1) a dedicated fan base that has grown over a century and which hasn’t seen much love (aside from a single movie that was ‘meh’, no cartoons, no movies, just a lot of fans), and (2) the nature of Sword and Planet pulp adventures makes the settings a swashbuckling romp that I could see quite appealing for those wanting something to listen to during the morning commute.

Burroughs wrote 11 of the original John Carter of Mars books. Anyone who’s read them knows the Star Wars is an homage (if not a blatant rip-off) of this Burroughs setting (see a review of the ties here, with adaptations of Jed (to Jedi) and Padwan (to Padawan), etc.).

Star Trek Adventures came in third. Still a strong showing. The current Star Trek Discovery, the recent Star Trek movies, and a fan base since the 60’s contributes to a perennial interest in this franchise.

It is also notable that both John Carter of Mars and Star Trek Adventures each use a version of Modiphius’ 2d20 system (which I reviewed here when Mason ran a Conan game with 2d20 rules, and which I analyzed here). 47% of respondents would most like to listen to licensed setting that happens to use a 2d20 system. That’s half the market! Over time if we ran both John Carter of Mars, Star Trek Adventures, and maybe other 2d20 settings like Conan, we could really tap into a nascent but high-demand 2d20 fan base. Whether or not these folks are actually interested in 2d20, or just the setting (regardless of system), it still remains that Modiphius is dominating the licensed-IP market with a broad base of fans.

Adventures in Middle-earth is nearest and dearest to my heart. I would love to run a 4th Age campaign someday. I’ve been plotting an epic campaign for 20 years with some cool elements I’d love to roll into the story arc. Thing is, I love this setting so much, I’d want to really pour myself into it with a lot of energy on research Tolkien’s legendarium, being true to the rich history, and having great props like original poems and riddles. I’d want to re-read the Silmarillion, The Hobbit, and The Lord of the Rings. All of which is to say, I don’t want to run this setting until I’m not also running my Redmark campaign and I’ve had a change to do some serious preparation.

With a Game-of-Thrones type big-budget series coming to Amazon Prime TV in 2020 (see the details here), I could also see 2020-ish timeframe as an ideal time to run a Middle-earth campaign to coincide with the interest the TV series will generate.

Stuff to verify: We’ll want to experiment with theater-of-the-mind combat to make sure we can make 5e rules run fast and in an appealing way on audio.

Star Trek Adventures could be a cool, planet-of-the-week series that would lend itself to multiple GMs (each GM taking over the control of an NPC captain, and adventures being episodic, much like The Original Series). The system looks cool, but like Star Wars: Edge of the Empire, has a bit of crunch to cover all the science and gadgets of the setting.

I am a bit concerned over the future of the Star Trek franchise though. The current Star Trek Discovery series went out of the way to drop an F-bomb (which was totally needless in my opinion). Now there is strong signs Quentin Tarantino will direct the next Star Trek movie, and requiring that it be Rated R. JJ Abrams and Paramount have apparently signed off on this. Star Trek meets Kill Bill? This rush to be needlessly edgy has me a bit worried for the long term tone of the franchise.

Stuff to verify: We need to read and try out the rules.

John Carter of Mars is slated to Kickstart later this month. Modiphius has been working on this product for nearly two years with extensive beta testing, so I expect the products are ready-to-print and the Kickstarter is just for marketing and raising capital for the print run. I’d expect PDFs of the RPG materials (and possibly the print material as well) to be out in the first half of 2018. We should know by end of December what those timelines are.

Stuff to verify: We’ll want to find out the release date when they announce it in December. We need to read and try out the rules.

Side note: here’s a blog post with some preview images of the upcoming products. 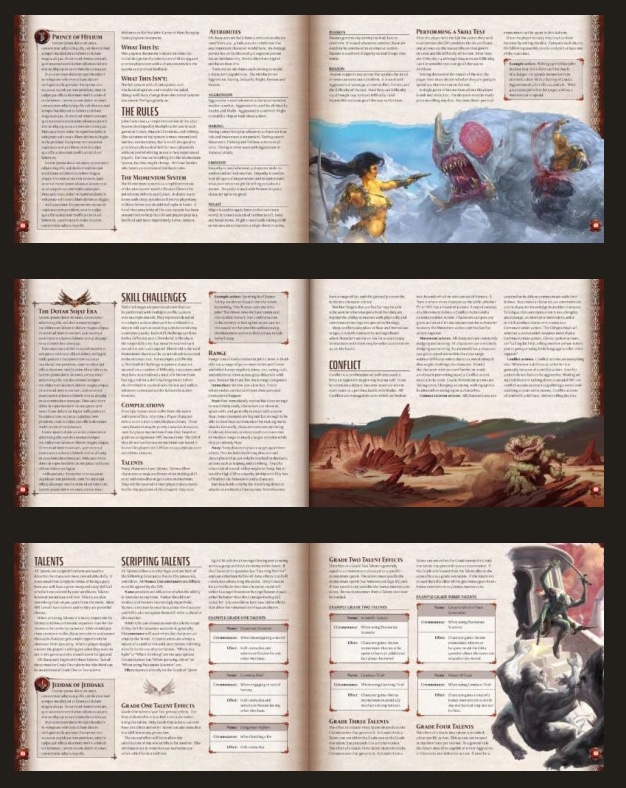 For 2018, I could see running Starblade and Shadows of Redmark as original IP settings. Star Trek Adventures and John Carter of Mars could be viable 2018 licensed IP settings. Mason might be able to run a podcast actual play campaign post-Numenera. We also have our ShinnCon’s (currently slated for T.A. 1640 era Middle-earth games) to consider. I could see myself kicking off Adventures in Middle-earth in late 2019 or 2020 after we wrap up the current Redmark campaign. And of course, by 2020, who knows what new shiny’s will be out to capture our interest!

These are just my thoughts though. I am really looking forward to discussing these settings with my game group to see where interest lies and work out a potential podcasting schedule.