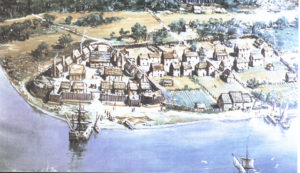 Beric’s Blessing and Baron’s Revenge headed south from Constantine’s Land, in search of better weather and a larger land mass.  (Also putting some distance from the clockwork Automoton). A sheltered Bay revealed a small river delta, with a deep water estuary.  The two carracks sailed upriver for an hour, until they came upon a point where the delta forks met up to become one river.  In the distance to the east lay a vast forest, while at the river fork point, flat, solid ground stretched as far as the eye both to the north and south.  The party decided that providence had brought them to the right spot, and the colony was founded on October 10, 1115 (YOTE).

Soon, lumber parties went into the forest to fell the resources needed, while tenements and a palisade were quickly raised.  A chill hit the air the next week, and the workers redoubled their efforts to house the settlers. Captain Rannic of the Baron’s Revenge asked to take his leave, but put off his journey when convinced his departure would be futile. His deferral was timely, as activity and arrow flight was spotted in the forest.  The party was dispatched, until confronted by a party of green scaled lizard like short creatures, armed with spear and cross bow.  Attempts to parlay were for naught, and battle ensued.  the party was victorious, but not before the “Dragon Kin” leader spoke threats to the party in broken Gothic.  Odd.

The next week brought the first snowfall, and the dispatching of the ships to the Bay.  Two days later, Beric’s Blessing returned, and announced that Baron’s revenge had departed early, back to the Old World.  A second encounter with the Dragon Kin was more successful, and ended in a stand off.  Later that week, the entire settlement was surprised by a large floating object coming towards the Settlement. An Airship of some kind perched just above the entrance to the Settlement, and three “Lizardmen” repelled down ropes.  led by a fine speaking Aristophenes, the Party learned that the Lizard Empire had been in contact with the Gothic Empire for some 200 years, and had invited the Gothic Empire to settle the new world in a fulfilment of an alliance. The party, perplexed by the lack of intelligence provided to them by their own government, pondered their next moves, in an ever more hostile land.