[su_row]
[su_column size=”2/3″]
Here we go again. Both players decided they needed at least one more turn with the lists they constructed last week before passing final judgement on who reigns supreme. Sometimes a particular map or mission can favor specific unit capabilities or strategies, and sometimes it takes some practice to really settle in with a new list. And for sure sequels and rematches are always popular in hopes that they will live up to the original.

The Fett Strikes Back? Jim Bob definitely hopes so, but rest assured Mason and his furry gang will have something to say about that. Since both players are running the exact same lists again, it will be interesting to see what (if any) lessons were learned from the lopsided victory from a week ago. 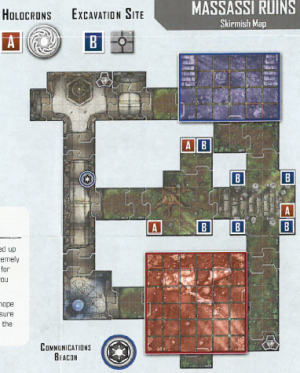 This map provides a great combination of objectives and combat zones for point scoring opportunities. The objective goals require players to recover lost Jedi holocrons and transport them to a communication beacon where their information can be transmitted. Each transmission will award you 10 VPs, but there are only 30 possible points so the rest of the victory must come from good old fashioned combat.

To make a long story short, those furiously furry Wookies proved too much to handle for Fett and his Imperial lackeys once again, but it should be noted that the rematch was much more competitive than the first meeting between these two lists. 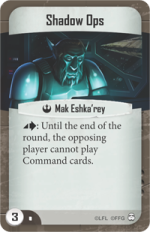 The pivotal moment came at the beginning of the second round when Mason played the Shadow Ops command card, completly disrupting Jim Bob’s strategy. Fett ended up getting defeated after much of his side’s planned offensive moves were negated by the timely command card Mason drew at the beginning of the round. At that point Jim Bob went into scramble mode. He managed to scrap for 10 points with a successful holocron transmission but in the end, all of his units were defeated (curse your furiousness, you Furries!!!).

This match did highlight some of the strengths and weaknesses inherent in these two lists and some of the lessons learned by playing them again. In particular, Mason made great use of Chewie’s Protector capability which made his units extra tough to damage. Keeping his units bunched together took full advantage of that bonus especially since Jim Bob’s list lacked any units with Blast attacks. Also highlighted was the fact that Jim Bob’s list lacked any real synergy between the units which unfortunately is typical of Mercenary (aka Scum) lists right now. Hopefully as more Scum expansion packs are released it will make that faction more competitive – only time will tell.