This is the first IA lunch league to include 3 players! Jeff was free to join in on the fun this week, so we put together a little scenario to accommodate all of us getting in on the action. Using an idea from the guys over at Imperial Propaganda, each team was built with a 30-point buy for deployment cards and 10 command cards consisting of 1-unique for the leader (3 point card), 2-two point cards, 3-one point cards, 4-zero point cards.

A stalemate where everyone has a weapon pointed at someone else. All the threats are equally balanced to ensure a mutual disadvantage; no one is walking away from this standoff with what they came for. This tricky situation is a favorite of Hutt gangsters looking to setup and get rid of multiple rivals at once. In this case Darth Vader, Boba Fett, and Chewbacca all received an “anonymous” (we know it was you, Jabba) tip that one of the others was spotted alone at the Kuat Space Station. On the surface it looked like a simple snatch and grab job until that first step through the airlock and then the wheels came off. 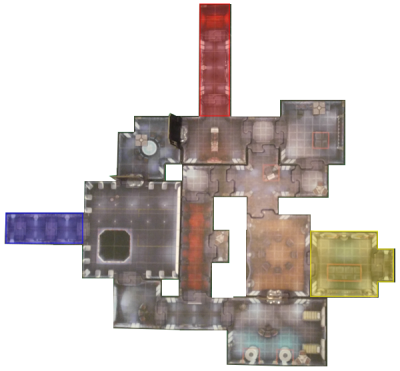 This is a slightly expanded version of the Kuat Space Station map with customized mission objectives to suit a 3-player skirmish scenario. The mission objectives focus on the leader of each strike team. Points are scored normally through combat but when the strike team leader kills a group, the player is awarded double the Victory Points. At the end of the round if the strike team leader is still alive, an additional 2 Victory Points are awarded! As usual, first player to 40 points wins.

The action started with Jeff deploying from the red zone and heading toward both of the crates in that area. Mason deployed from the yellow zone and quickly moved to control the southernmost terminal. Jim Bob found his team facing action on two fronts as he deployed from the blue zone and looked to both acquire a crate and control a terminal. As intentions began to unfold in the second round, Jim Bob decided against splitting his team in two and pulled his units back from the terminals leaving them open for Mason. Using Fett’s superior speed, Jeff made a run for the crate on the far right which set up a clash between Vader and Fett’s support units over the crate between them. Vader began plowing through them and putting points on the board. 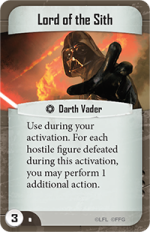 As the lead began to build, Fett and Chewie got into gear with one common goal between them – stop Vader or this show is going to be over with real quick. They both put forth a good effort, getting some damage in but more importantly putting stun and weakened conditions on him. It looked like the tide might be turning at that point, but Jim Bob was able to rally with the powerful Rally command card to shake off the harmful conditions and continue the Brutality. That left Vader free to take down Fett and with double the points, easily secured the victory.

The moral of this story is: Sith Lords are mean.