Redmark Session 51: A Feast Fit For A … Well Us

A feast fit for a … well us

Outside the pylon, Marcus creates a feast for all to enjoy which grants several magical resistances for the party.

Elran notices that the pommel of the dagger that Katarina used to kill the avatar of Thadus Dool has an Alpha & Omega symbols on it and that it is also loose.  Upon looking inside the pommel, he finds a letter from Sister Sophia to Ghost Dancer. This letter talks of orc raiding parties attacking the city of Stonehelm.

Fire Willow proceeds to give the party a primer of the “Prophecy of Decimus”.  Which seems to indicate that the orcish attacks are indeed following the prophecy.

Marcus gets bored os his own feast and the party’s discussions around going to Omnidia or looking into the attacks at Stronghelm and he begins to interact with the console inside the pylon.

The rest of the party decides that as long as we hold three of the stones Thadus Dool cannot control Threa as he needs all seven.

Marcus gets the group moving to Omnidia.

When all else fails; just holler

The party arrives in Omnidia.  It appears to be a jungle with mountains to the north and south.  As if the party was in a valley.

With no leads on the direction of Lundie’s uncle.  Mundie starts to yell out the name of his uncle “Dundulk!!!  Dundulk!!! It’s Lundie … where are you???” This draws the attention of an owlbear which the party quickly dispatches.

Quintos and Marcus have the idea a better way to find Dundulk might be to Scry on him using the crystal ball that Quintos has with him.  Quinton does this and sees Dundulk in a prison cell. Quinton then uses the crystal ball to communicate with Dundulk.

Dundalk talks of “metal men” of both red and white that attacked his party and now imprison him and torture him.

Dundalk says to the best of his knowledge the other pylon is buried deep within the temple of Hygog.

Shortly after the party is attacked by a wizard in red and several war robots. 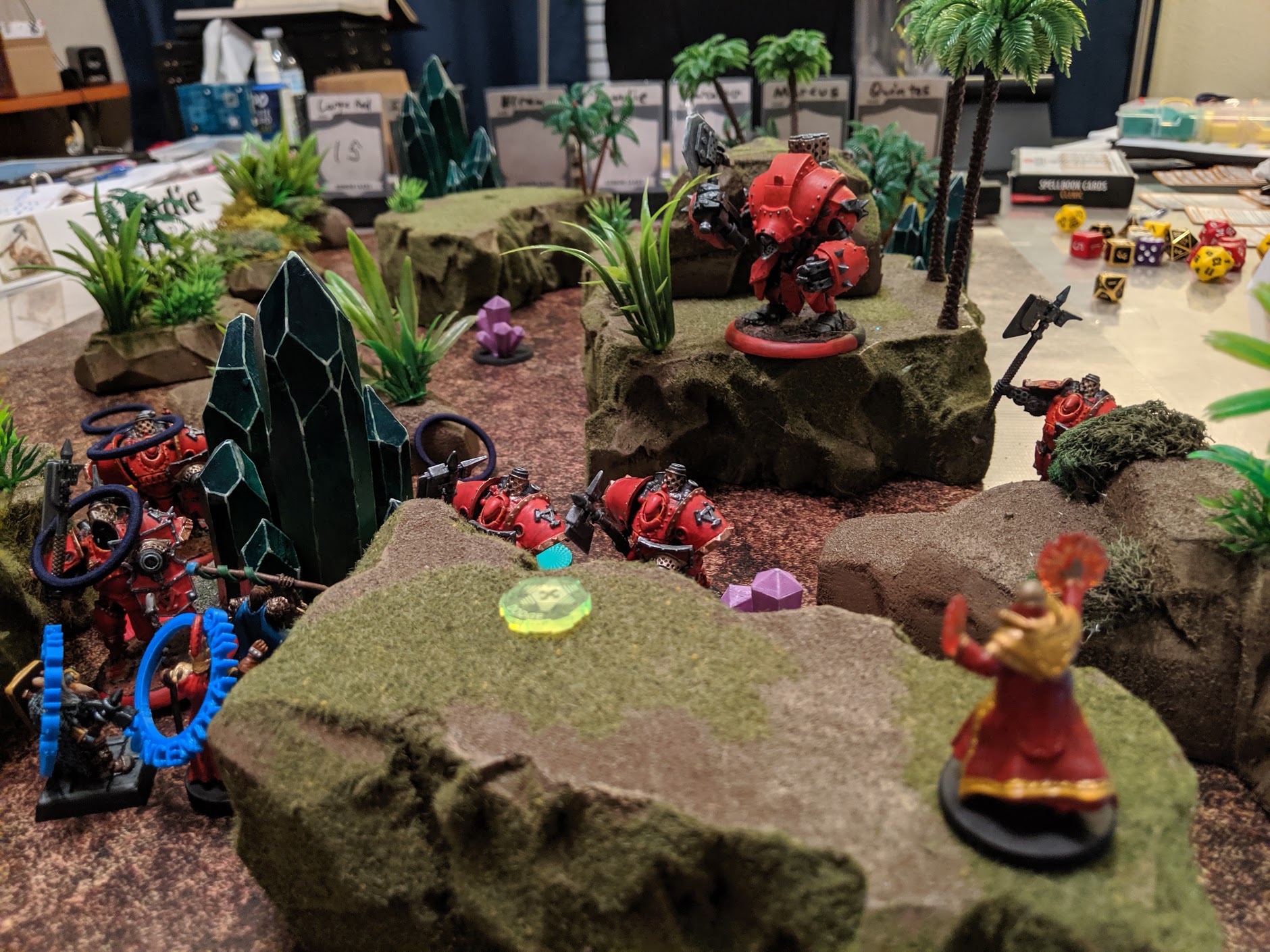 With well placed Hunger of Hadar spell by Quintos, Marcus’s spiritual guardians, Lundie smiting with his warhammer, and Elran sending fireballs at the foes.  The party finds their first encounter with these metal men, “manageable”. That said, they stay alert and weary, but continue on to the Temple of Hygog.

(See all photos from the game)