Redmark Session 18: All for a Kiss

It is an auspicious day that begins with the heroes boarding Kat’s Claw—the ship loaned to the group by Lady Anna of Stonehelm.

The Ship is so named for the captain of this sleek vessel: the extremely hot Katarina. She’s no ordinary, beauty, however. She comes from the famed sailing-people of Oscarria. What’s more, she’s known as The Claw, because she carries at least a dozen daggers and seems to know how to use them—as the scars on her near-perfect face attest.

It is only natural that Quintos and Ghost Dancer, upon seeing Kat, immediately bet on who will win her affections.

Before the ship leaves port to find the Island of the Buffalo, a messenger delivers a parcel for Ghost Dancer. It’s a message from Zelni, the circus lady. It warns of Mezkal, a fellow explorer who seeks a fountain of eternal life on the same island our heroes are trying to find. He is a man of questionable character. Thus warned, the heroes take to the sea. 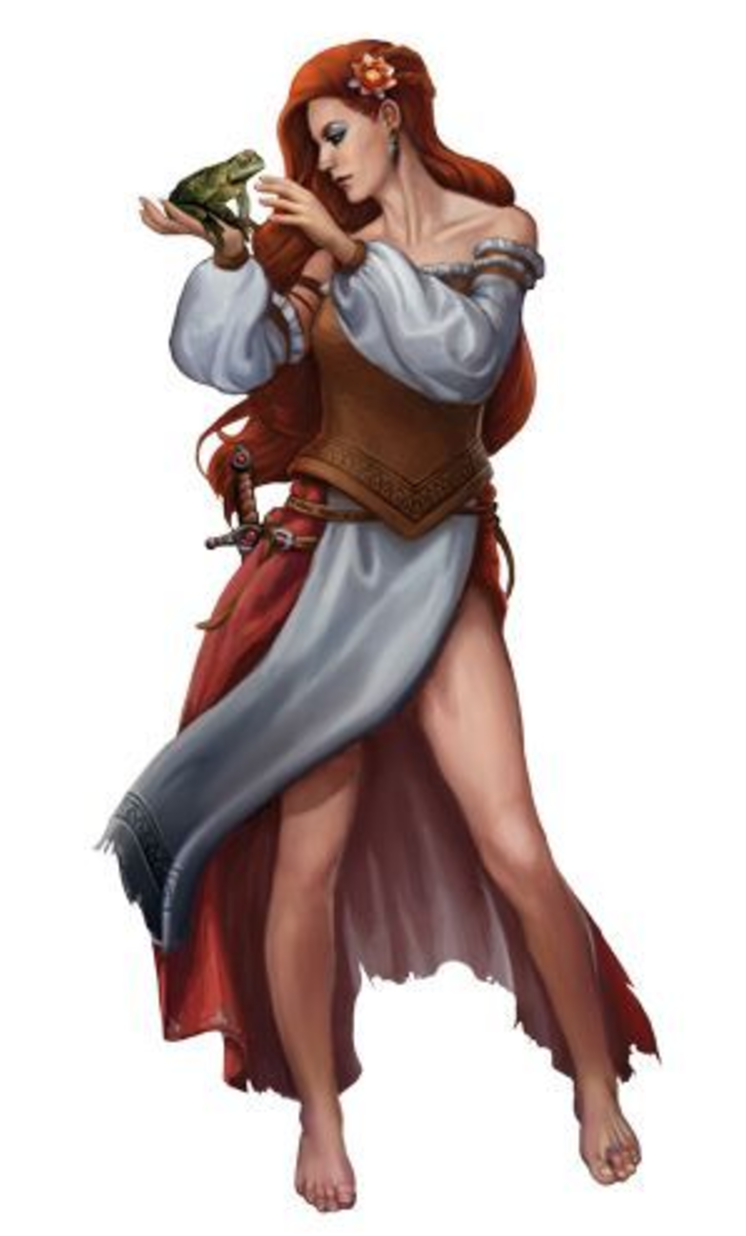 A Bad Start for Quintos

Ghost Dancer takes the early lead in the battle for Kat’s affections. He asks her about her homeland and then he tells her of his people and his mission to find the buffalo. Quintos jokes that Ghost will mate with the buffalo to make a Centaur-like creature: the Buf-ar.

From there, Quintos engages Kat in a deep, complex philosophical debate. Her eyes glaze over. Then her eyes wander to the handsome loincloth of Ghost Dancer. Ghost literally, not metaphorically, gives Kat his tomahawk.

The Eagle Has Landed

Two days into the journey, Marcus and Quintos get permission to celebrate Feriae Marti, a sacred Roman holiday and militaristic dance ritual that honors Mars, brings the renewal of Rome, and opens the Season of War. At the conclusion of the celebration, Marcus seeks an augury.

His faith and devotion are rewarded with an amazing sight. An eagle flies from the west and lands on the mast of the ship. It peers into the souls of Marcus and Quintos, and Marcus feels that this is an actual incarnation of a god. The eagle then flies directly east. Marcus is able to interpret the sign: During the Season of War, the group’s destiny lies to the east.

Never Bet against an Unseen Servant

Drinking and gambling ensue. Marcus, Quintos, and Ghost Dancer gamble with Kat and some of her crew. Unknown to everyone but Marcus, Quintos deploys his unseen servant to make sure the dice roll favorably for him. He splits the gold he won with the group.

The next day, when the wind dies and ship stalls, Kat calls for a triathlon of games to see who shall be the best of the best. There will be three events: swimming, holding breath under water, and wrestling. The prize? A sloppy, prolonged smooch from Kat herself.

Ghost Dancer surprises everyone and speeds ahead. Marcus and Quintos are not far behind. The three heroes shame the entire crew of sailors. So, the only question is, who will win among the heroes?

Things get a bit unpredictable as the competitive heroes strive to win. Quintos deploys his unseen servant again to propel him through the water. Then, when it is obvious that Ghost Dancer is pulling away, Quintos casts Hex on him. Despite that, Ghost fights through the disadvantages and wins. Quintos places second. Marcus third.

Who can hold their breath under water the longest? Wonder no more. It’s Ghost Dancer. Despite exhausting himself and nearly passing out, he endures the trial to win again, with Quintos in second, and a crew member in third. 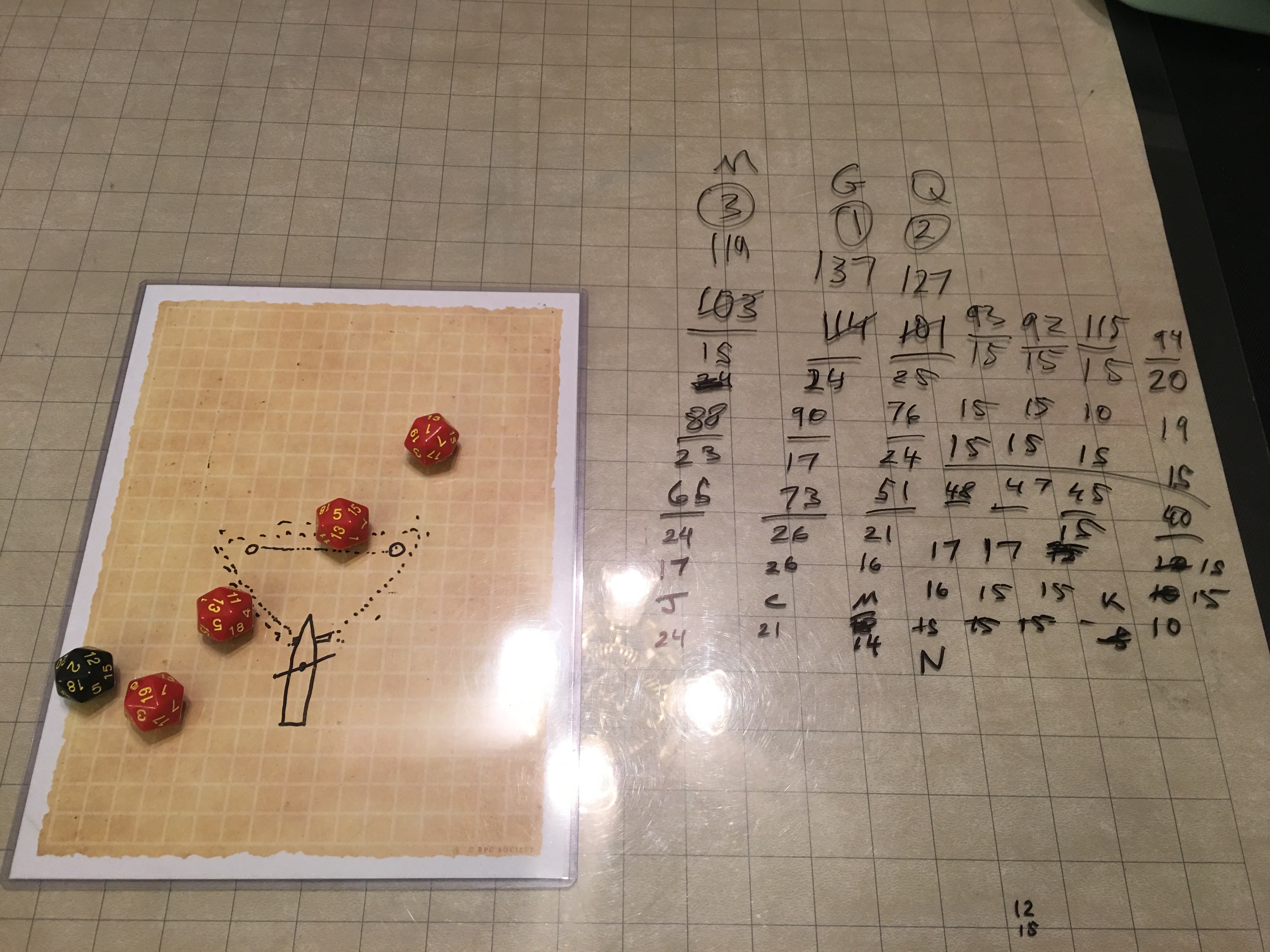 Marcus kung-fu’s the crap out of Ghost Dancer. (Damn Roman warriors.) But then, Ghost wins against the crew member he wrestles against, guaranteeing him a point and the overall victory. Marcus then defeats Quintos to win the event and show that you shouldn’t mess with a Roman warrior-priest. Even one who always gets knocked unconscious in battle. 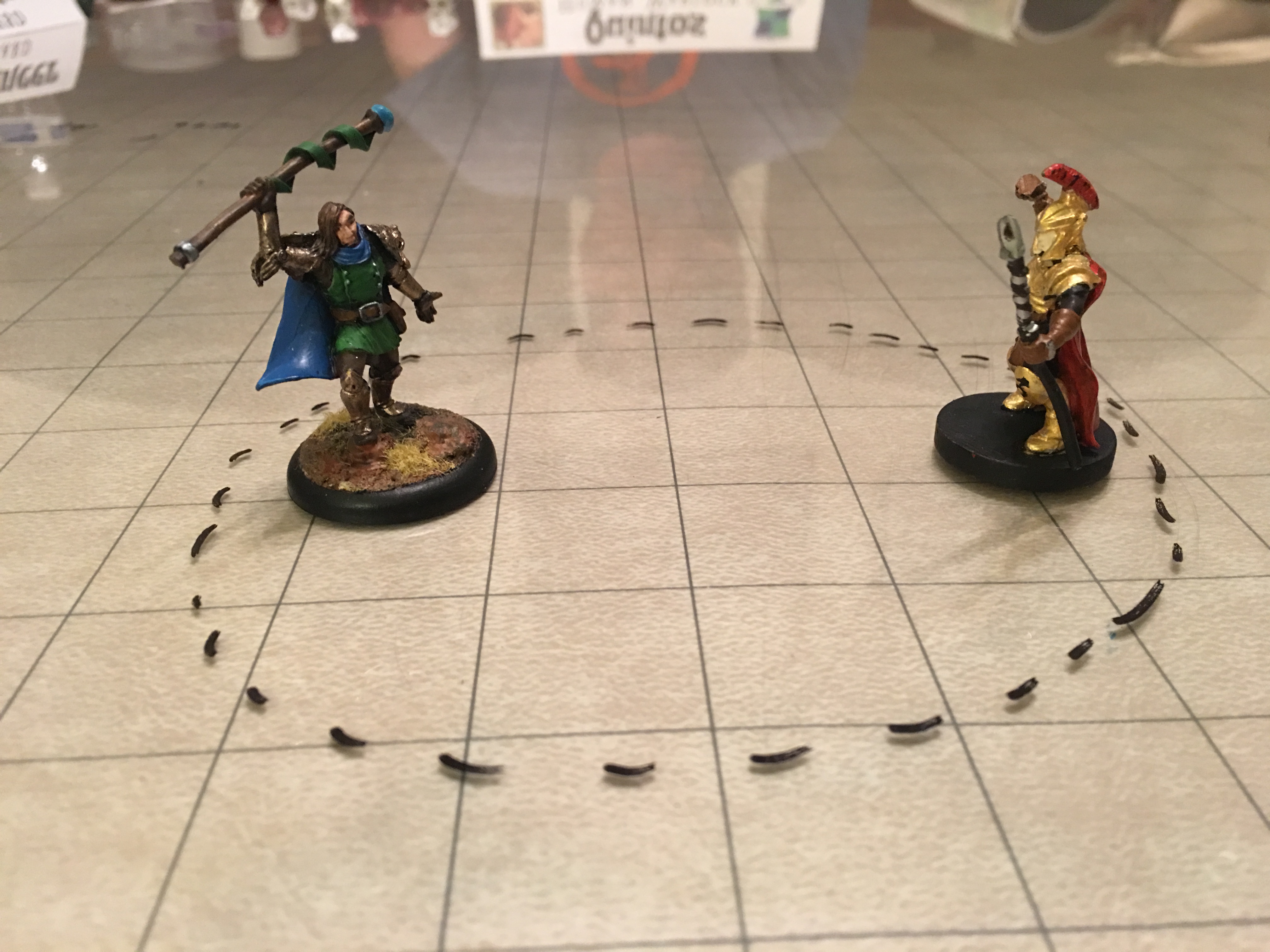 Marcus and Quintos must break the tie for second place. To do so they must tell the most compelling, entertaining story. They both tell great stories, but Quintos wins the day with a tale of Hashar at Bone Hill and his banishment to Bugbear Hell.

The Tables Are Turned

Ghost Dancer proudly takes the podium of victory and relishes his long, gooey kiss with Kat.

For winning second place, Quintos earns a hug from Kat. But then, during his hug, he spends an inspiration and makes a skill check. We discover that this was a legendary hug that makes Kat swoon, and suddenly, she is interested in Quintos!

Quintos’s two wingmen, Ghost and Marcus are getting a little pissed about always watching him score the chicks. Stan, therefore, rules that there should now be regulations governing how many babes a PC can “attune” to. Attunement for Women, Stan calls it. Out of game, Chris declares that it sounds like a perfume: Attunement for Women…by Calvin Klein.

I Scry with My Little Eye

Kat’s Claw arrives at the destination island. Only, there is a perpetual storm surrounding the island, and the island itself seems to only be two miles wide.

Quintos uses his crystal ball to scry and see the man called Mezkal. Sure enough, Quintos sees in the crystal ball the back of the man. He appears to be on a beached ship in one of the cabins flipping through pages of a journal. When he turns around, Quintos sees that the man is one of the living dead. With the crystal ball, Quintos is able get Mezkal to read aloud the pages of his journal. The grumbling zombie reads aloud and holds up the journal so that Quintos can read along with him. 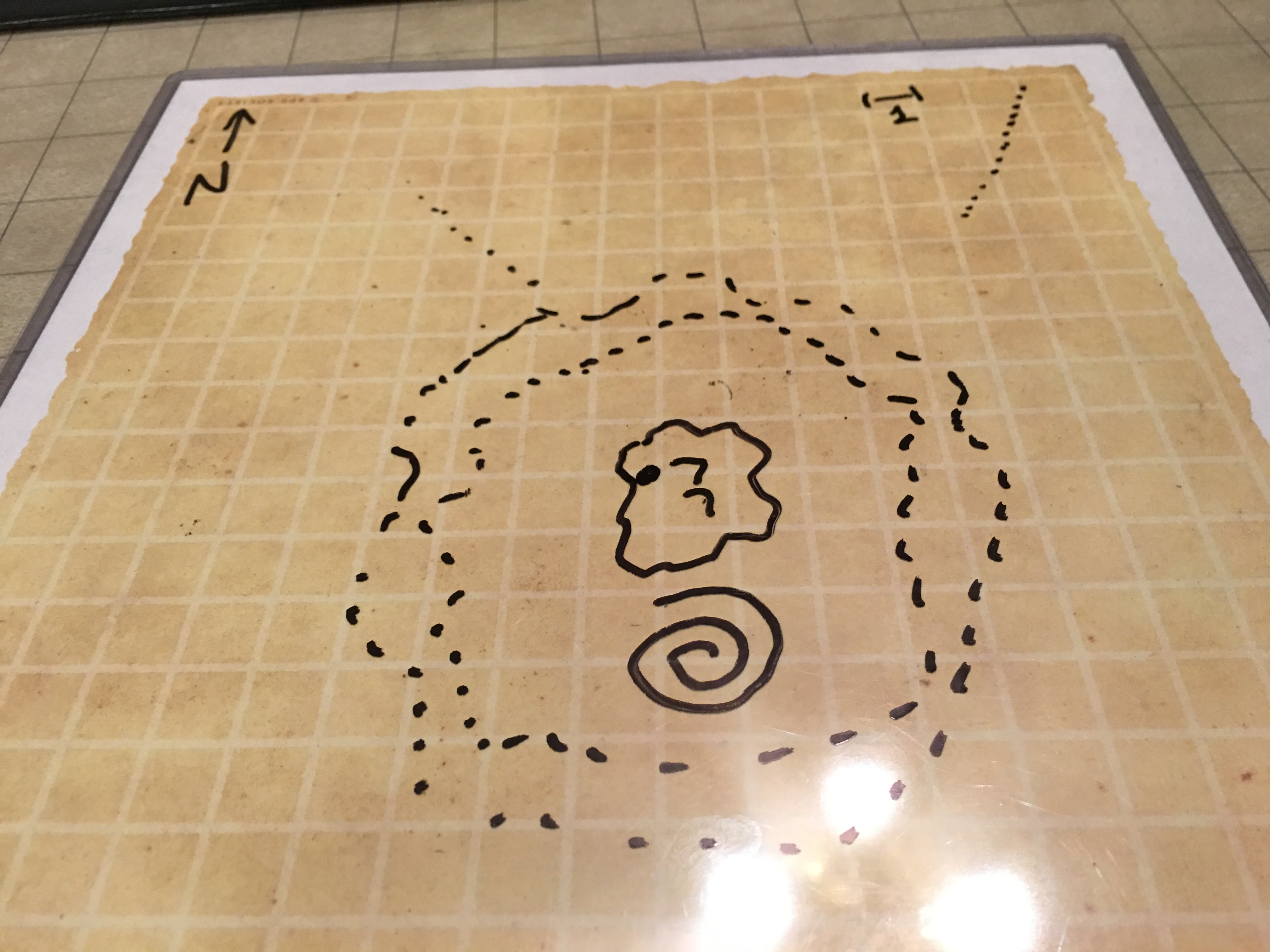 On the south side of the island, Mezkal found a perpetual vortex. Following a hunch, and despite a mutiny, he sailed into the vortex and arrived on another plane where they find the mythical island of Vridensia, 100 miles wide.

There, they found villages and a giant wall projecting the villages from…something big. Mezkal, against the villagers’ advice, traveled beyond the wall hunting for the well of eternal life. Along the way, they heard of cities with legendary riches in the interior of the island.

At last, they found the well. They drank from it, then filled barrels with the magical water, brought it back to their ship, and sailed back through the vortex. Back in their plane, the captain and two of his advisors kill the rest of the crew so they’ll have more money for themselves—temporarily forgetting, perhaps, that their crewmates all have eternal life. Strangely, though, they die. But not for long.

The well that grants eternal life does so by bringing back the recently deceased as undead abominations. The dead crew, now zombie-things, attack the captain and his conspirators, killing them and making them undead, too. Now, they are locked in an endless battle of vengeance and violence.

After hearing the tale of Mezkal from Quintos, Kat and her crew agree to sail through the vortex. They find it exactly where the journal said it would be, and plunge into it. 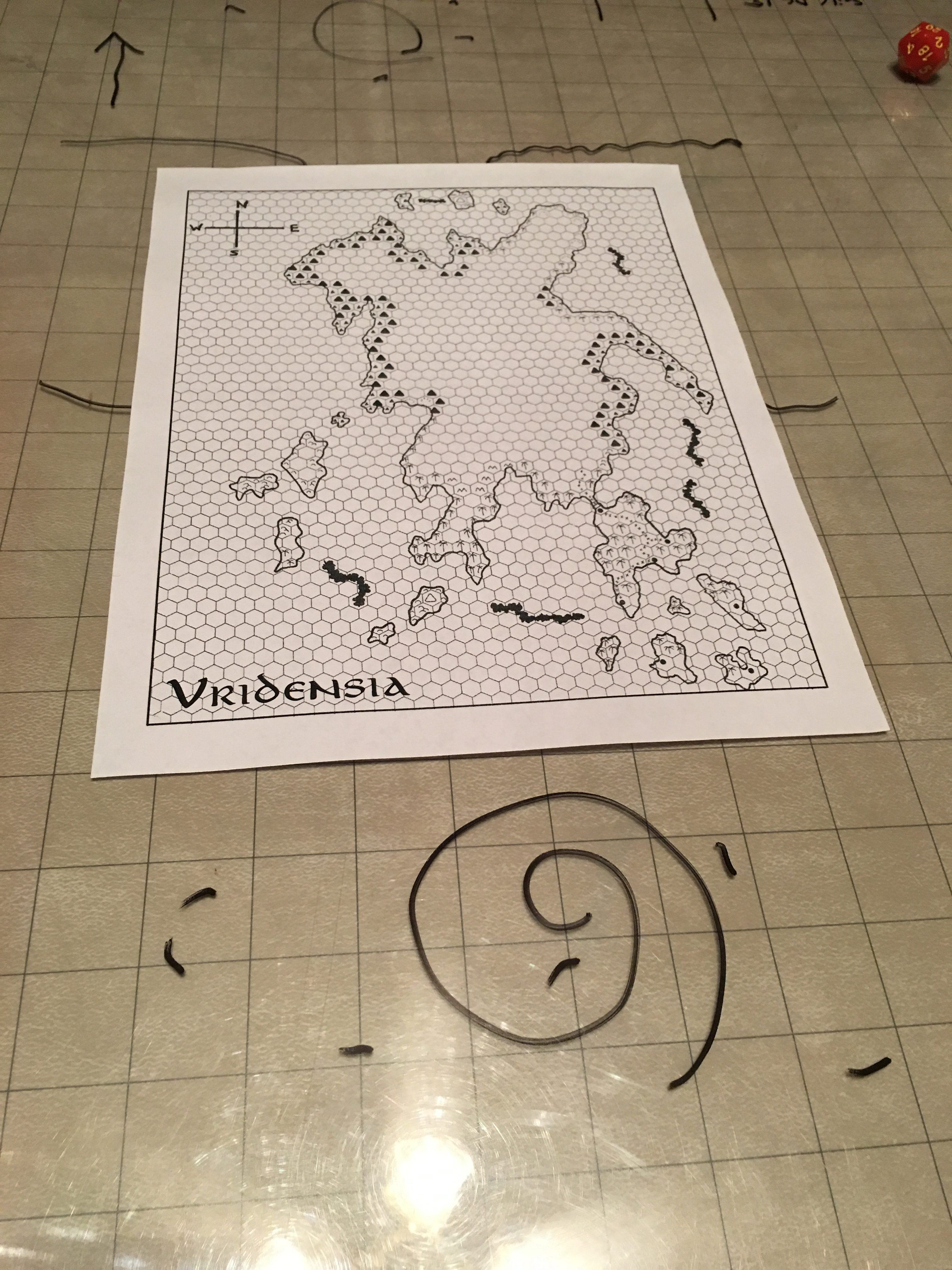 Kat the Claw, with some spiritual guidance from Marcus and bardic inspiration from Ghost Dancer, steadies the ship, avoids a giant sea serpent, and navigates successfully through the vortex into another plane—and they arrive at Vridensia! 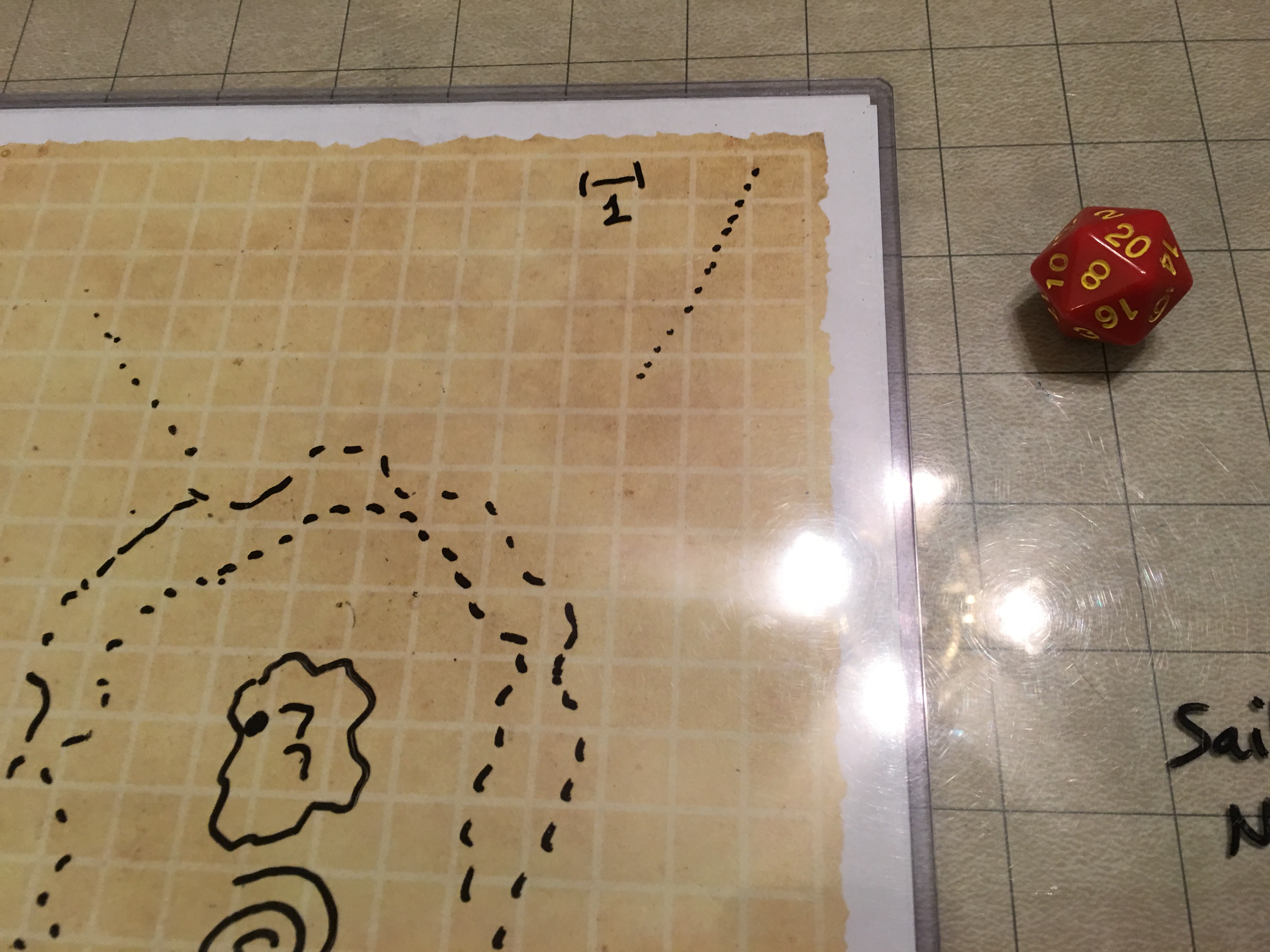 Kat gets a Nat 20 on her piloting roll!

As they set anchor to rest for the night, Marcus helps Ghost Dancer compose a new song to honor Captain Kat. They call it: Cat’s in the Cradle. Meanwhile, Quintos gloats in his soon-to-be conquest of Kat.

7 gp earned by gambling for Quintos, Marcus, and Ghost