Our hero’s around midnight, emerge from the cave of the necromancer Dubois, still wondering where he is located. They have saved Burt and the 10 citizens of Stonehelm. The hero’s decide to bury Brice’s sister’s body and head to the temple district under the darkness of night. Brice has requested they take his sister’s body to “Our Lady of Sorrows” the largest temple, who are protectors of the soul as it moves to the afterlife. Duke Leopold heads back to the inn for a nights rest and thanks his companions for the adventure.

As our heroes (Lundie the Dwarf paladin of Moradin, Marcus the priest of Mars and Quintos Noble Warlock) move through the city, they encounter some town guards and deliver the two slavers who killed for money. They tell the town guards that the Stone Legion lead by Quintos has purged this evil from Stonehelm.

Our hero’s arrive at “Our Lady of Sorrows” and describe the necromancer Dubois’s evil acts. The temple adepts wake up much of the temple, including Father Archibald the head of the order in Stonehelm. Quintos has some glancing looks at the young nuns, as the head of the order ushers them out. Our heros speak to the Father and describe the acts of evil. The Father ask our heros to hunt down Dubois and join with a Ranger who has found information on a possible location of the Necromancer (Dubois). The father also says that St. Longirius (the roman who pierced Christ with his spear), was a convert to Christianity and if they Romans Quintos or Marcus ever wanted to join the order they were welcome.

Marcus watches the ritual of Gentle Repose they perform on the body of the deceased girl and trades some holy water from the Silver Chalice for a holy book, the Bible of “Volgate” a text of the Roman Catholics.

Our heroes leave on a boat, polling down with the ranger to the location of the Necromancers cave. As they enter the cave (approx. 6 hours from the city of Stonehelm, they carefully navigate through the cave avoiding vines. Then a large black form starts to rise beside the boat. 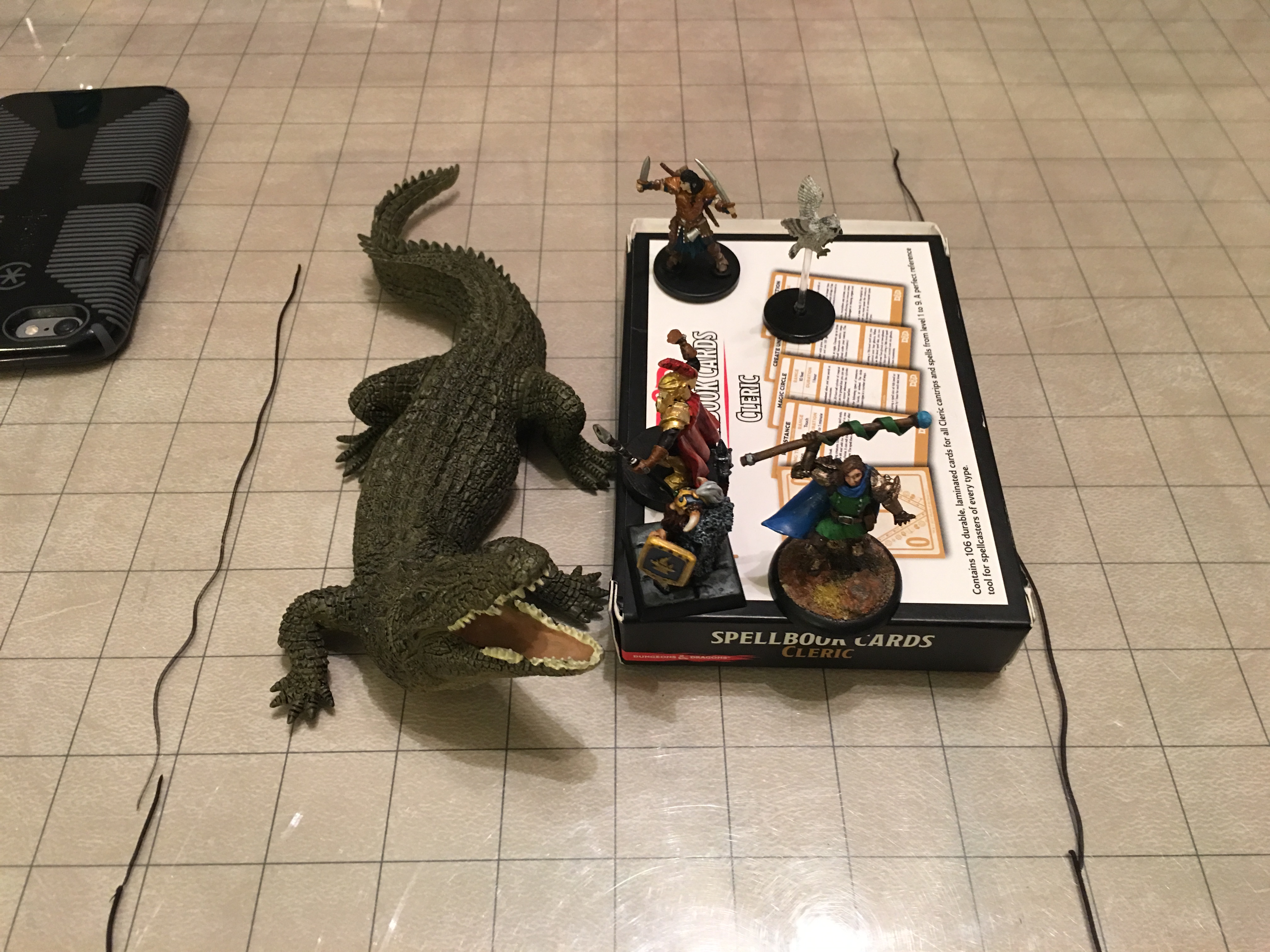 The Ranger fires his bow, as our other heroes ready actions. Then the giant necrotic crocodile a massive undead beast erupts from under the black dark waters, our heroes blast, hack, and fire arrows into the giant creature and with skill and luck, destroy the massive creature in less than 12 seconds. As the creature splashing under the water, a wave moves the boat…

The Ranger, off balance, falls into the water, Marcus drops to the ground to offer a pole to the ranger as evil creatures attempt to pull him under the dank water. We save the ranger and continue on our way. 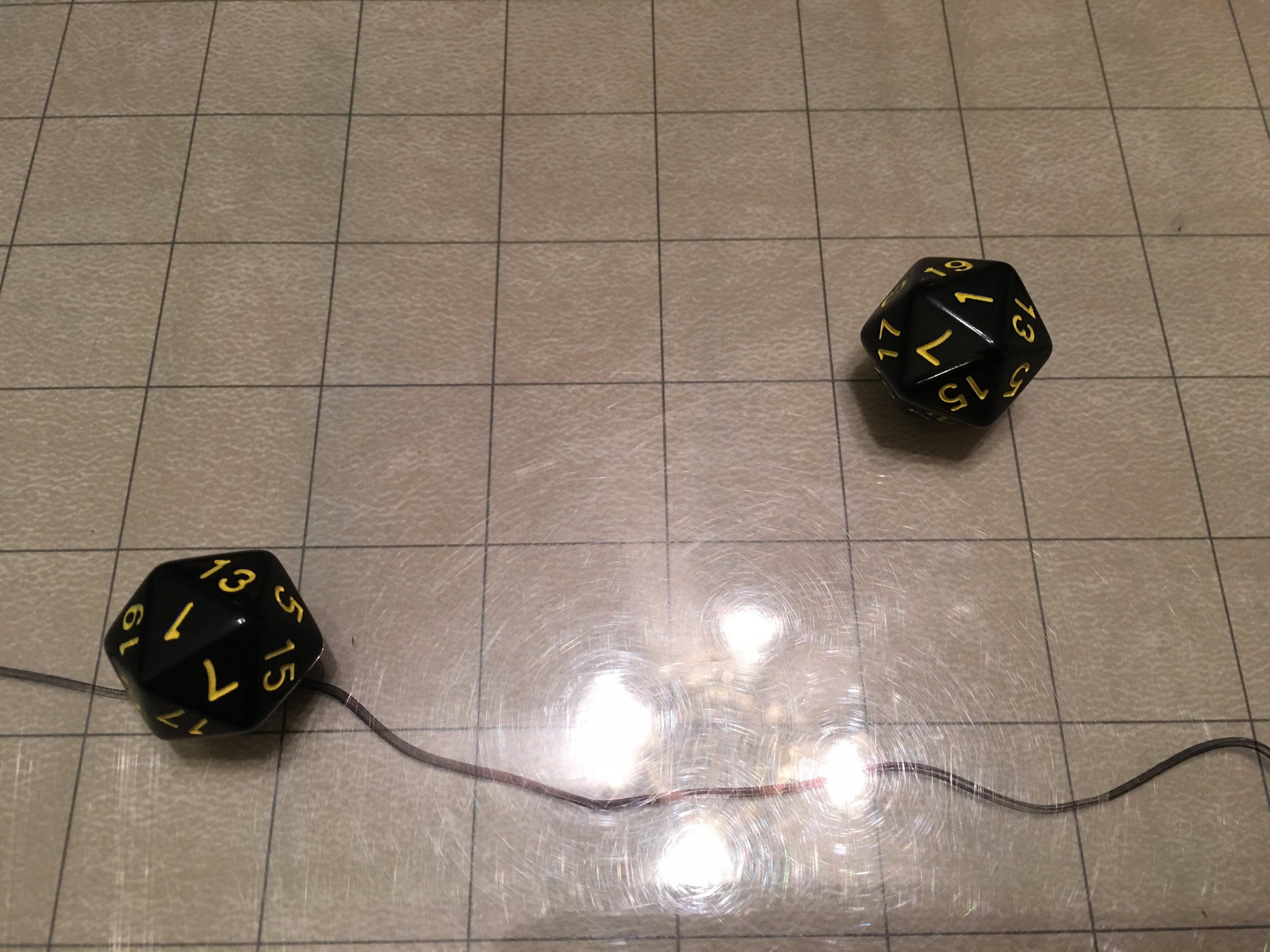 One of advantage rolls was a ‘Sadvantage’ results — double ones!

We poll to a sandy beach inside the cave, when suddenly a strange undead skeletal serpent breaks behind the heroes. Then by surprise launches a lightning bolt down the middle of the boat, hitting the Ranger, Quintos and Nero (Quinto’s familiar). The lightning is skillfully dodged and only partially burns our two heroes, but the familiar disappears in the blast. Our heroes fight the undead serpent, during the fight Marcus is slept, but the heros finally destroy the creature with Lundie’s hammer and Quintos’s spells. 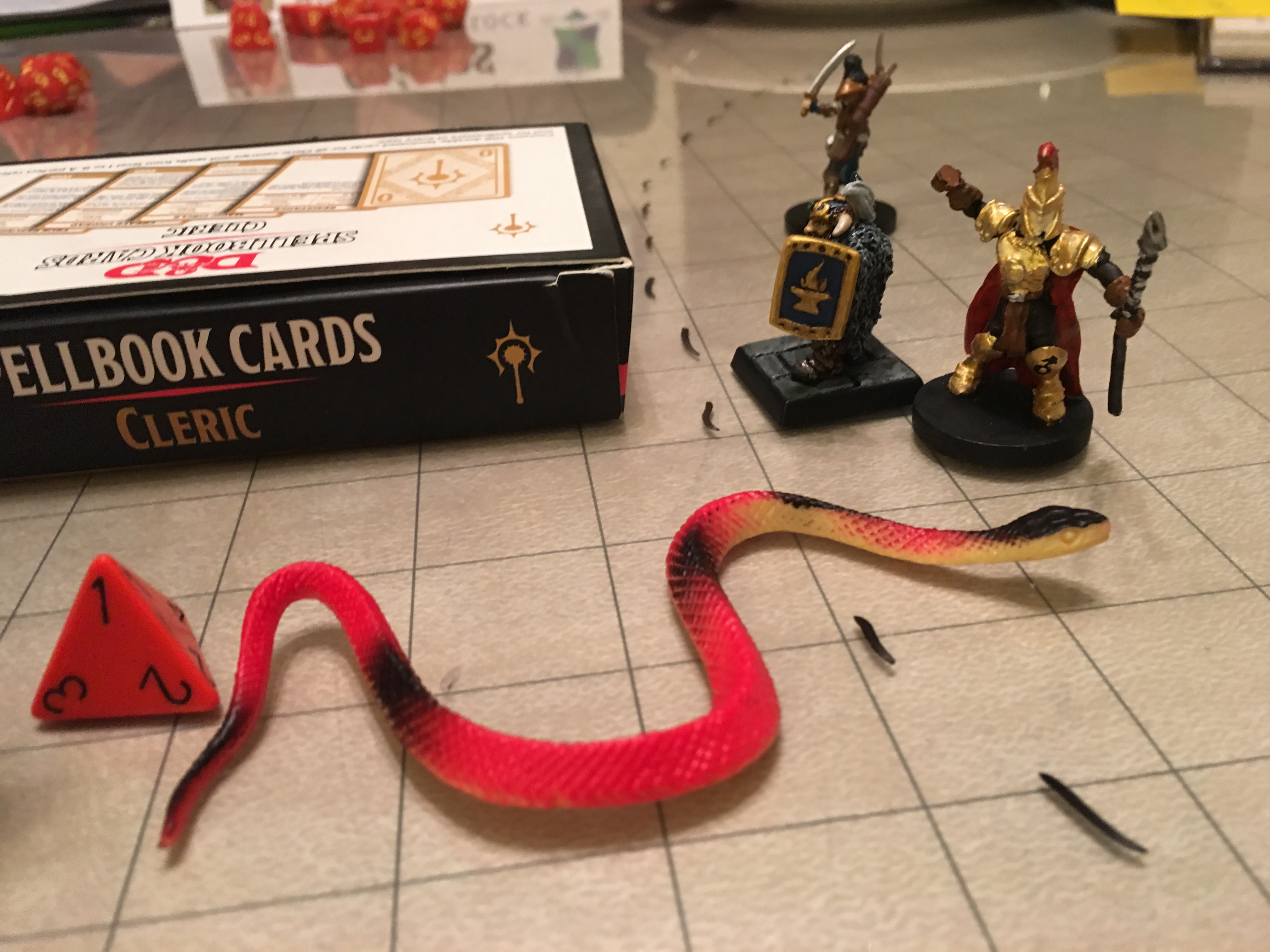 They move quicker into the caves, find 10 people locked in a cage and free them. They tell them to stay put, until we can come back to save them. Our heros’ then break down a door into a tunnel, that looks like a trap. Sure enough as they get half way down the tunnel, green gas gets released. Lundie and Marcus rush the door to knock it down, Quintos blasts the door with Eldrich energy as the Ranger shoots into the gas vents to slow the bellows.. Our heroes break down the door before the gas can envelope them….. Seeing a vile scene on the other side…. 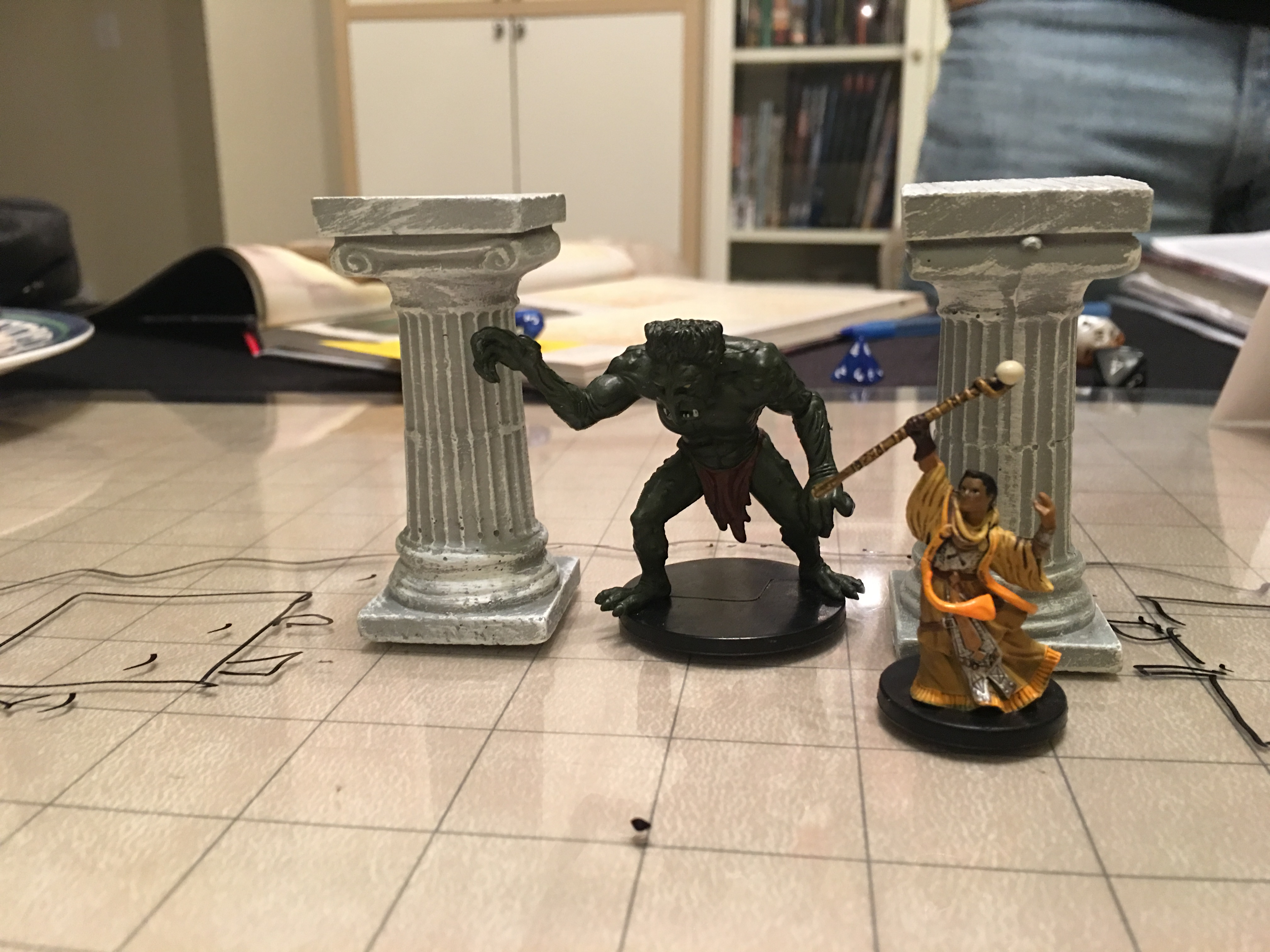 There in the room is a huge undead abomination, a monster created of pieces of different people and the evil Necromancer Dubios, laughing manically he yells “He’s Alive”. The monster starts to move as it’s connected to two strange magical machines on each sides of the creature, it pulls itself free… 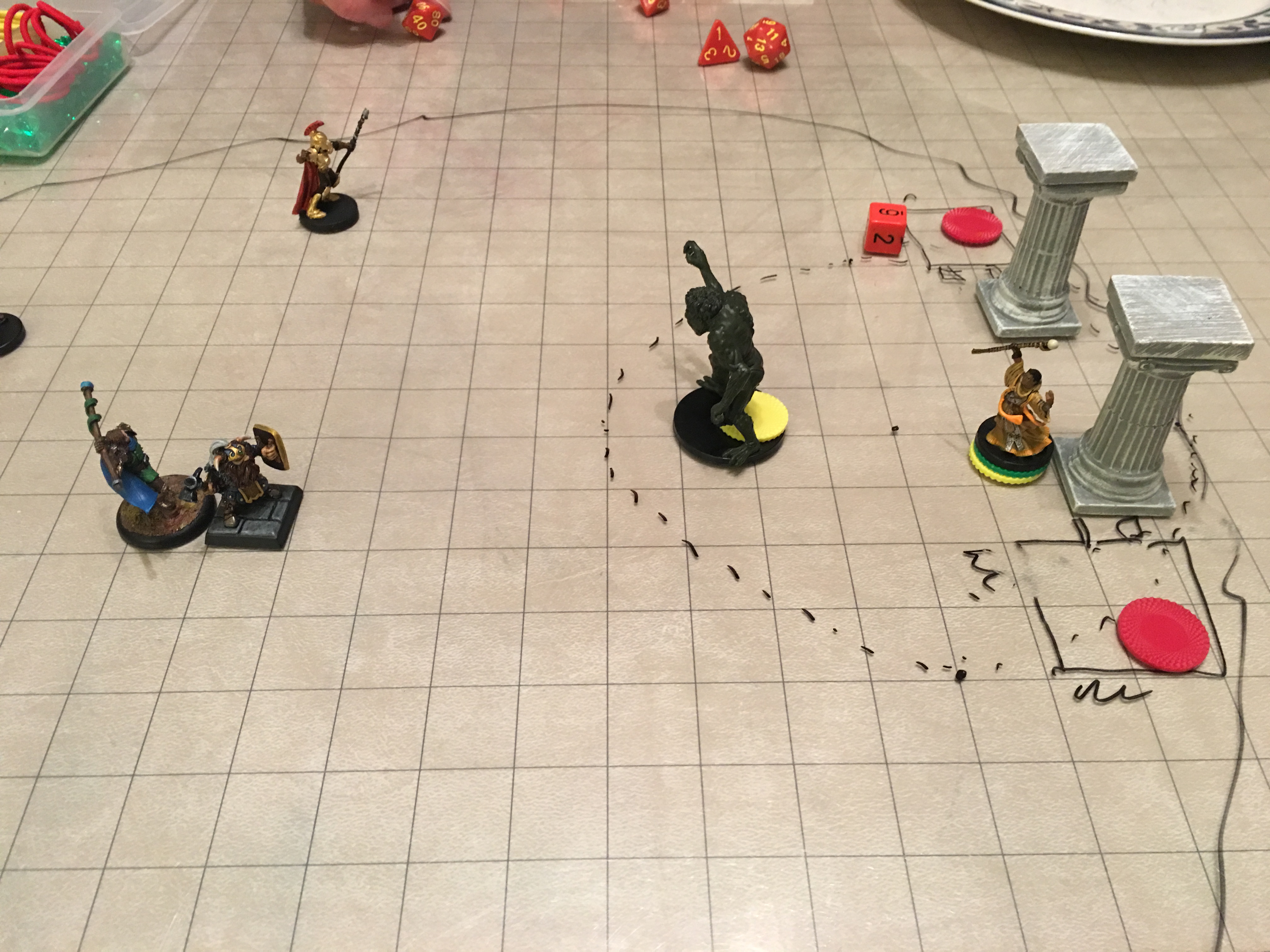 The Legendary Actions were fun (for the diabolical GM anyway)

We fight a brutal battle, Quintos summoning the blackness of the void, to immerse the villains in a painful tentacles of death. The heroes blast the magical machine to destroy its healing power of the abomination. Quintos works with Lundie wearing the helm of true-sight and blessed by the goddess Caldrindia (the Lawful good goddess of war). And Lundie helps Quintos aim into the void to blast the Necromancer with Eldritch bolts, dropping Dubois after multiple blasts. 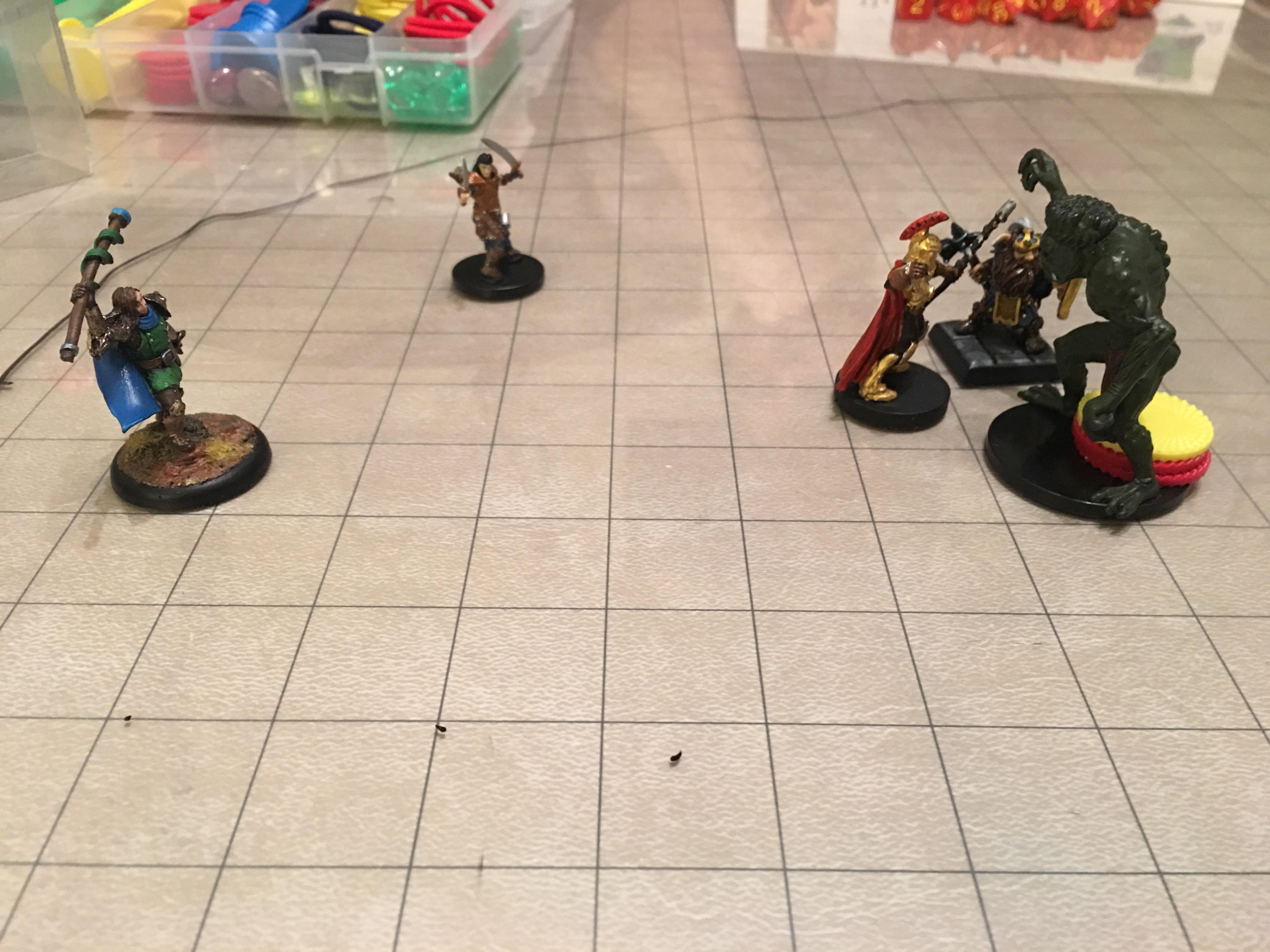 The Legendary Actions were fun (for the diabolical GM anyway)

Finally the Abomination leaps from the blackness, charred by cold and burned by Acid. Lundie and Marcus face off with the beast, as the Ranger fires and Quintos blasts. 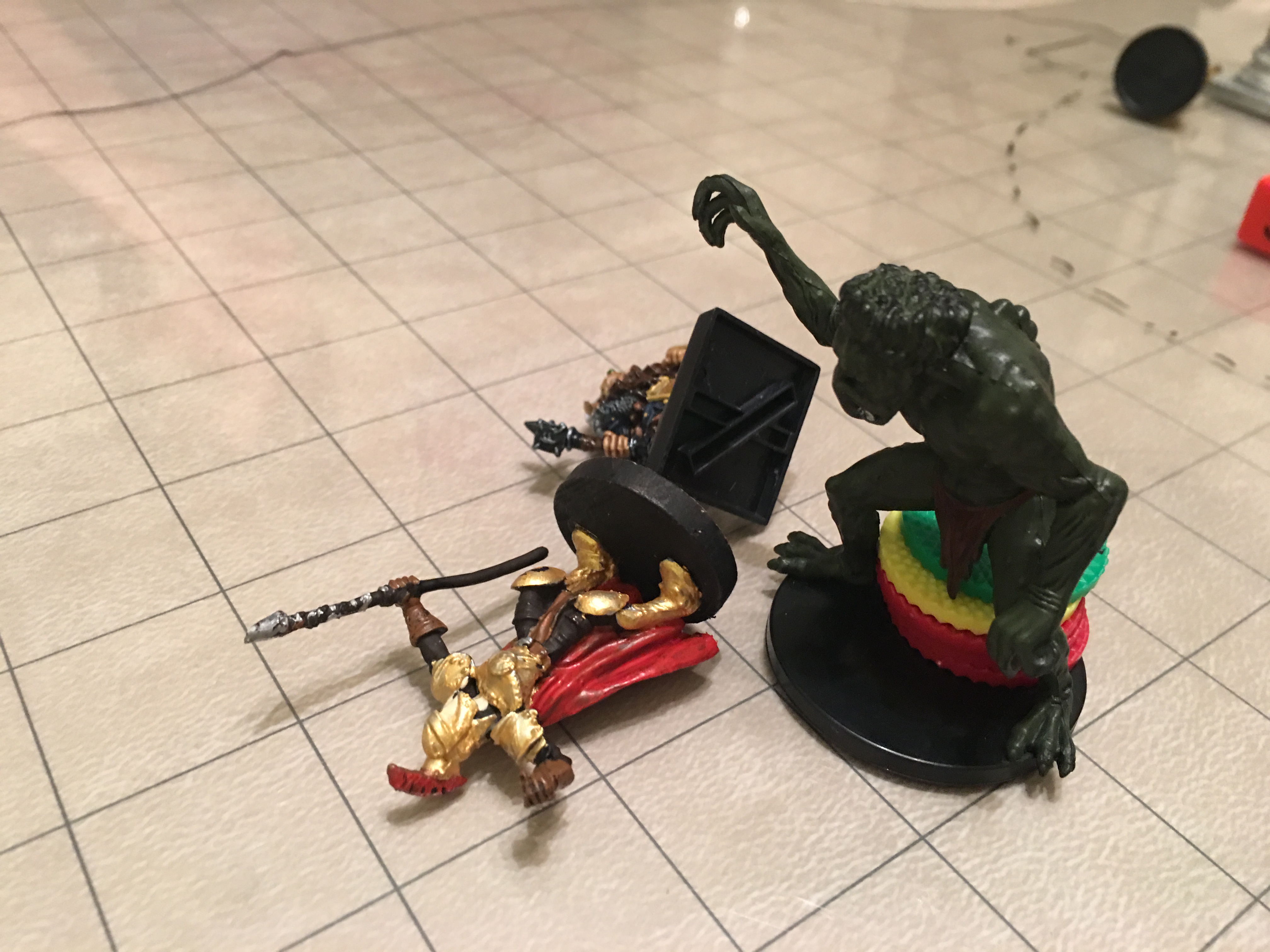 Finally Lundie summons the full power of Moradin in his Warhammer and knocks the Abomination’s head from his unclean body… Silence fills the room as the heroes have defeated the deadly Dubois and his undead horror. 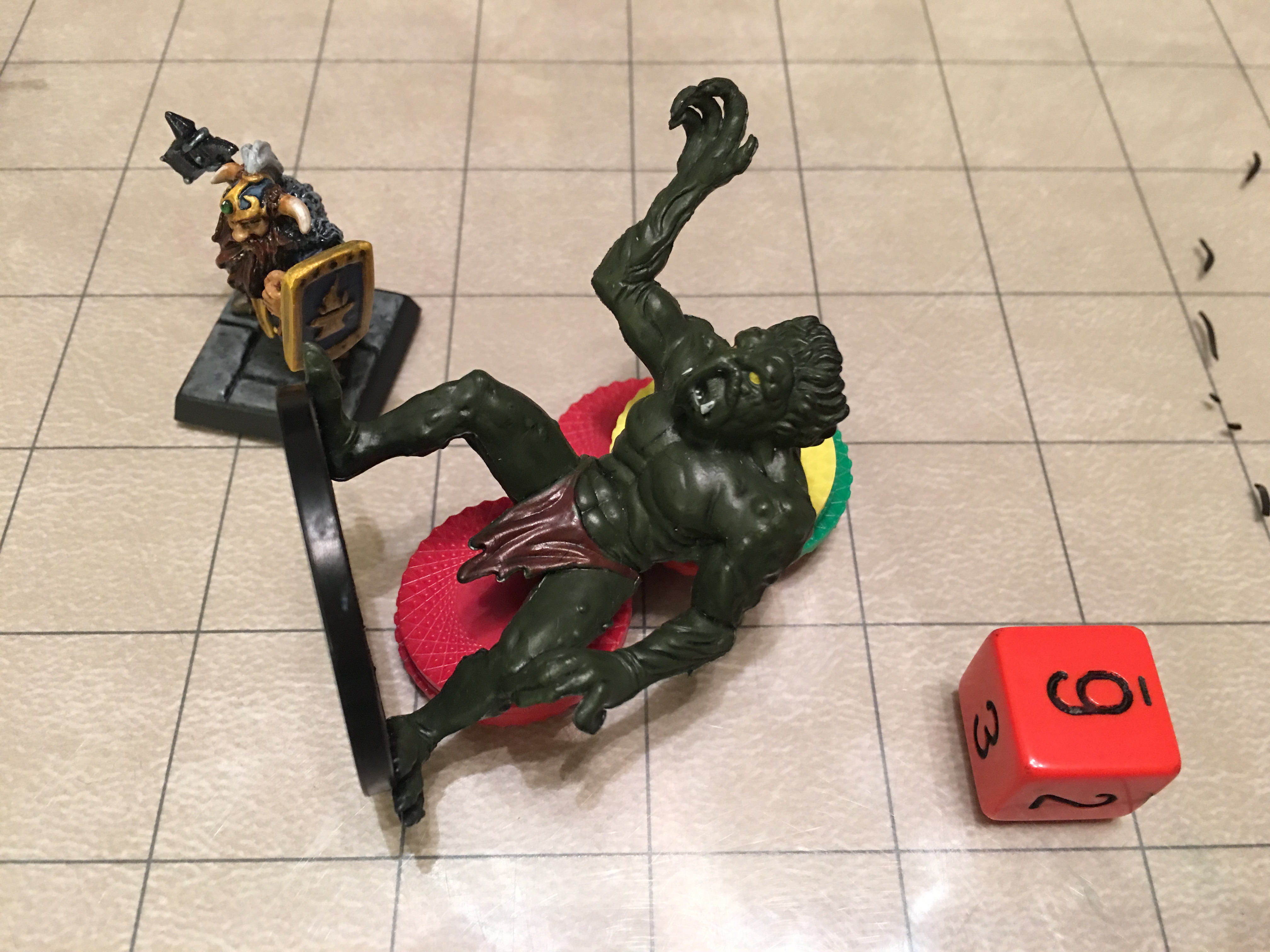 The heroes in the black library of Dubois find a letter written to the Necromancer. It says in a Dark Tongue that only Quintos can read;

“Thanks for helping the destruction of Stonehelm, your actions provided a pivotal roles in our plans” The letter has a wax seal by an “ORC SKULL”.

Our heroes free the captured citizens of Stonehelm and return to the Temple of the Lady of Sorrows victorious over the undead of Dubois.

And once again the Stone Legion triumphs over evil.