The journey begins with our heroes traveling towards one of the largest cities of Threa, Stonehelm (population over 30,000).   It’s about seven thirty at night, close to sundown as they travel closer and approach the north gate.  They encounter two guards Reginald and Edwin.  Our weary travelers ask for a good inn.  The guards recommend the Kneeling Bard an establishment with good rooms, good drinks and great views of attractive barmaids.

Marcus (the priest of Mars), decides to wait 30 minutes, until these guardsmen get off duty, he wants to ask them about rumors in the city, the orc incursions.  Marcus uncovers that attacks have not been coming recently and it’s quiet now.   He offers to buy these two guardsmen some drinks at the Kneeling Bard.

Quintos (Noble Warlock) , Lundie (Dwarven paladin) head towards the Kneeling Bard, thirsty for drinks and good views..   As they enter Quintos (after his recent death experience) rushes to get a stiff drink, Lundie seeing a chance to drink some ale with his friend, grabs a brew.  A beautiful barmaid with flowing red hair provides them some drinks. They also see an interesting human in fine clothes, handling a deck of cards.   He appears to be of noble birth.

Marcus enters some time later, with Reginald and Edwin, he sees the beautiful Lorita (the red headed barmaid) and is struck by her beauty.  Marcus bows and kisses her hand, then smiling tells her of her beauty.  He then orders drinks as Lorita, tells Marcus he might like sitting with the noble man with the cards.

Marcus, comes over to meet the human, he introduces himself as Duke Leopold a man of noble birth from an island country to the north east.  He claims to come to Stonehelm to find people to help free is kingdom.  They start to play cards, as Quintos comes over and drunkenly sits next to Marcus saying he has dibs on the red head, he then staggers back to his table with Lundie.

As Marcus and Duke Leopold start to drink and play some games of chance, which the Duke skillfully wins. A dog wanders in with the stable boy, asking is this our dog.   Marcus scratches the dog and finds a torn piece of cloth written in blood HELP BART.

Marcus seeing the blood is intrigued and concerned.  He asked the beautiful barmaid, Lorita, to hold his bottle of wine and requests if the Duke likes a bit of adventure and he agrees, then goes over to get the other members of the Stone Legion (Quintos – the noble inebriated warlock, Marcus’s dear lifelong friend) and Lundie (the Dwarf Paladin of Moradin and savior of Marcus on numerous occasions).   They all leave following this strange dog.

Our hero’s head through the streets of Stonehelm, it’s about nine at night, so Marcus requests Mars to light his spear.  Eventually, they arrive at the docs, but not before Quintos almost falls into the water in his drunk state.   Lundie grabbed him prior to the splash.   The dog takes us into a cave, as the hero’s advance, Quinto’s owl Nero, sees bats and bat guano.  Our hero’s are careful not to breath or step into it.  Then Quintos in a drunken state falls backwards.   He hits the ground with a loud noise, the dog barks… 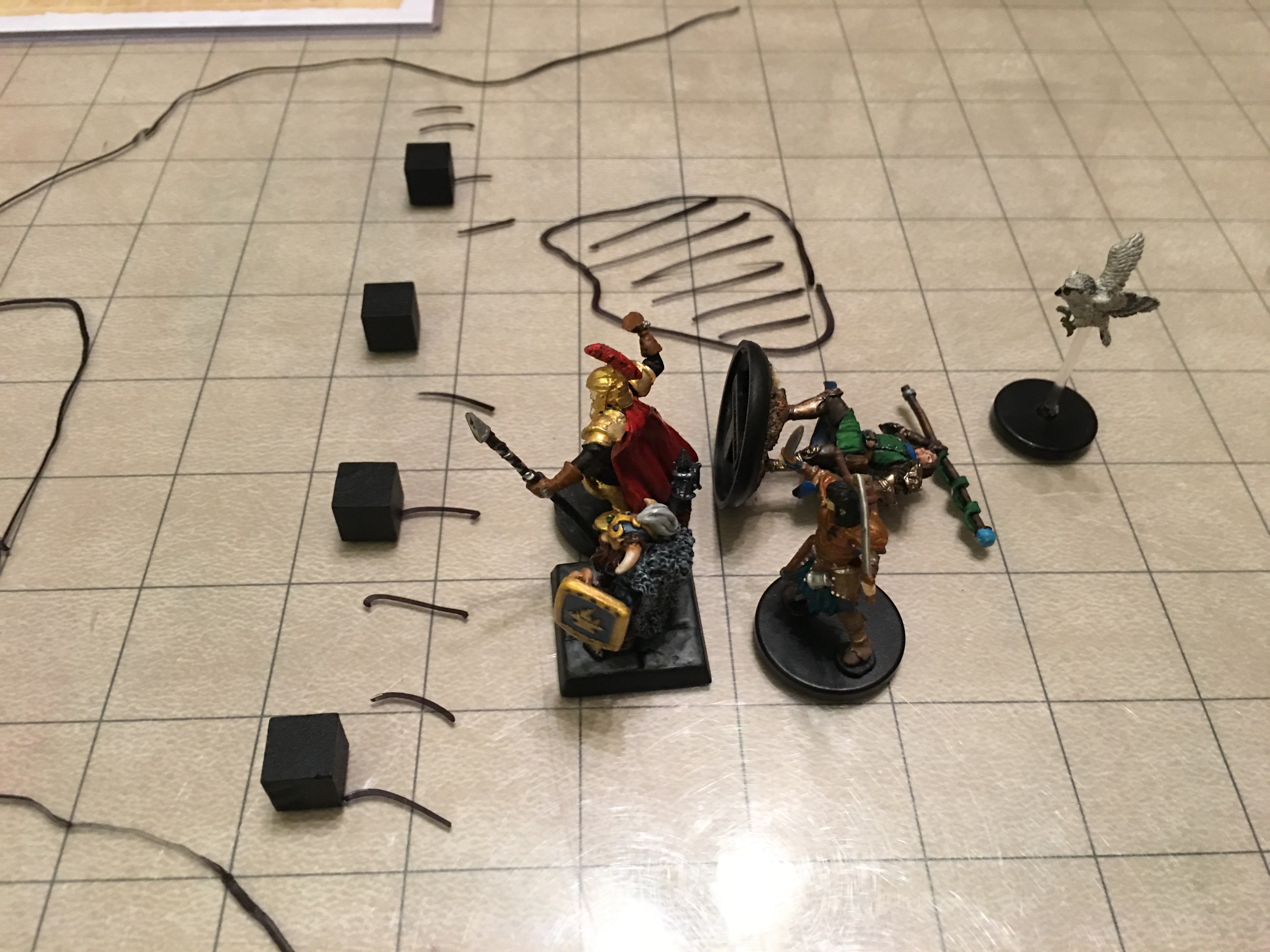 Suddenly, four groups of bats fly down from the ceiling heading towards the heroes, we then hear undead moving towards them from two caves in front.  Finally two giant dire bats spread their wings on the ceiling ready to attack.   Marcus calls out to Mars to protect our hero’s and by his name smite those that face his worshipers, as a host of spirit warriors in armor of Mars and spears appear in mist around our hero’s. 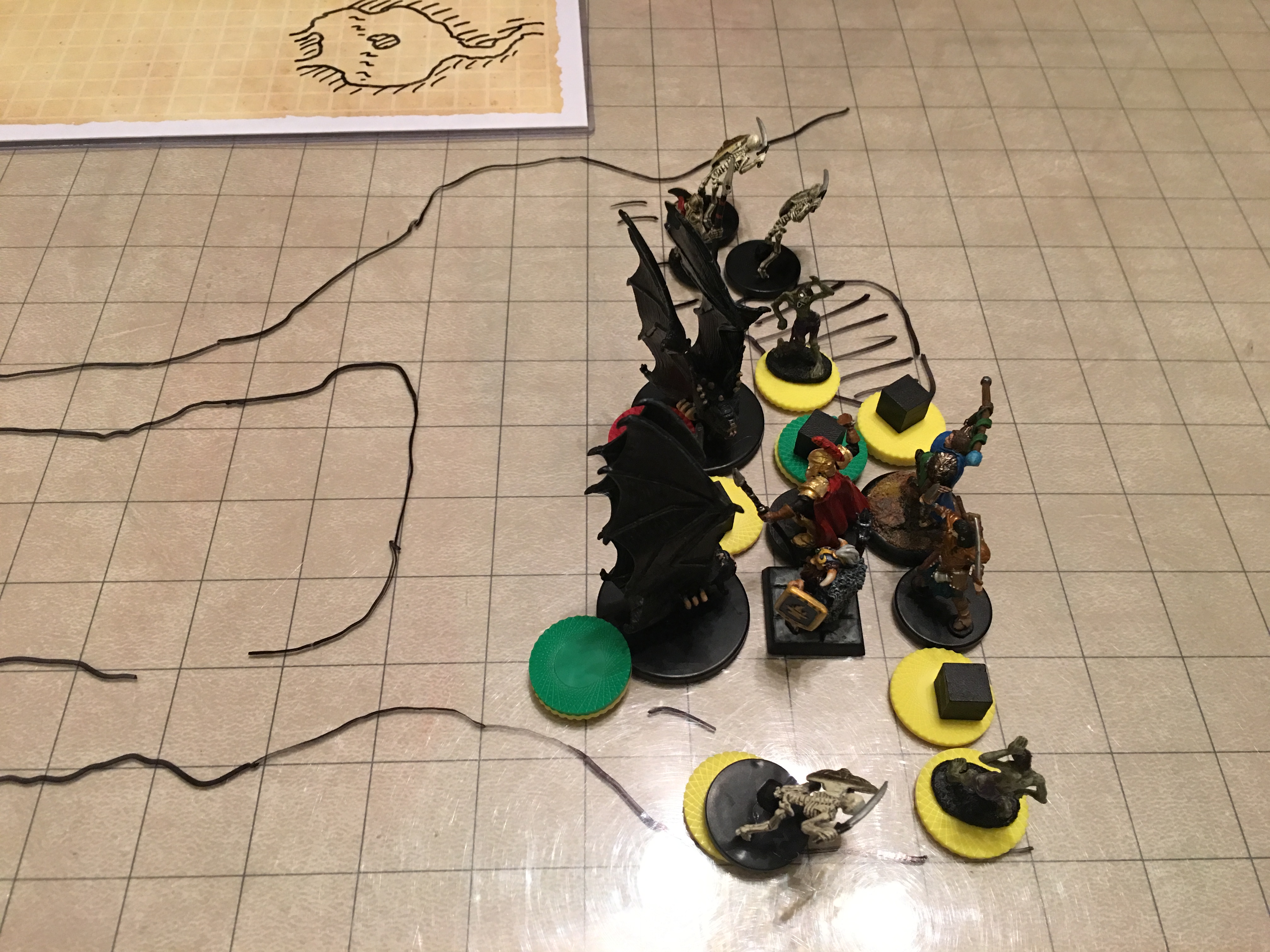 The bat’s charge, the spirits attack and wound the bats.   The other hero’s jump in and the fight begins.   During the battle, our hero’s fight with the glory and strength of the Stone Legion.   Lundie uses his power of Moradin to heal the alcohol poisoning of Quintos.   Quintos readies a massive fireball, but before he can cast is blinded by the dire bats.   But due to his skill as a caster and senses, while blind he places the fireball in the perfect location to significantly damage the dire bats and destroy one of the smaller bat groups and some undead.  Our heroes fight and win the day for Mars, for Moridan and for their personal glory. 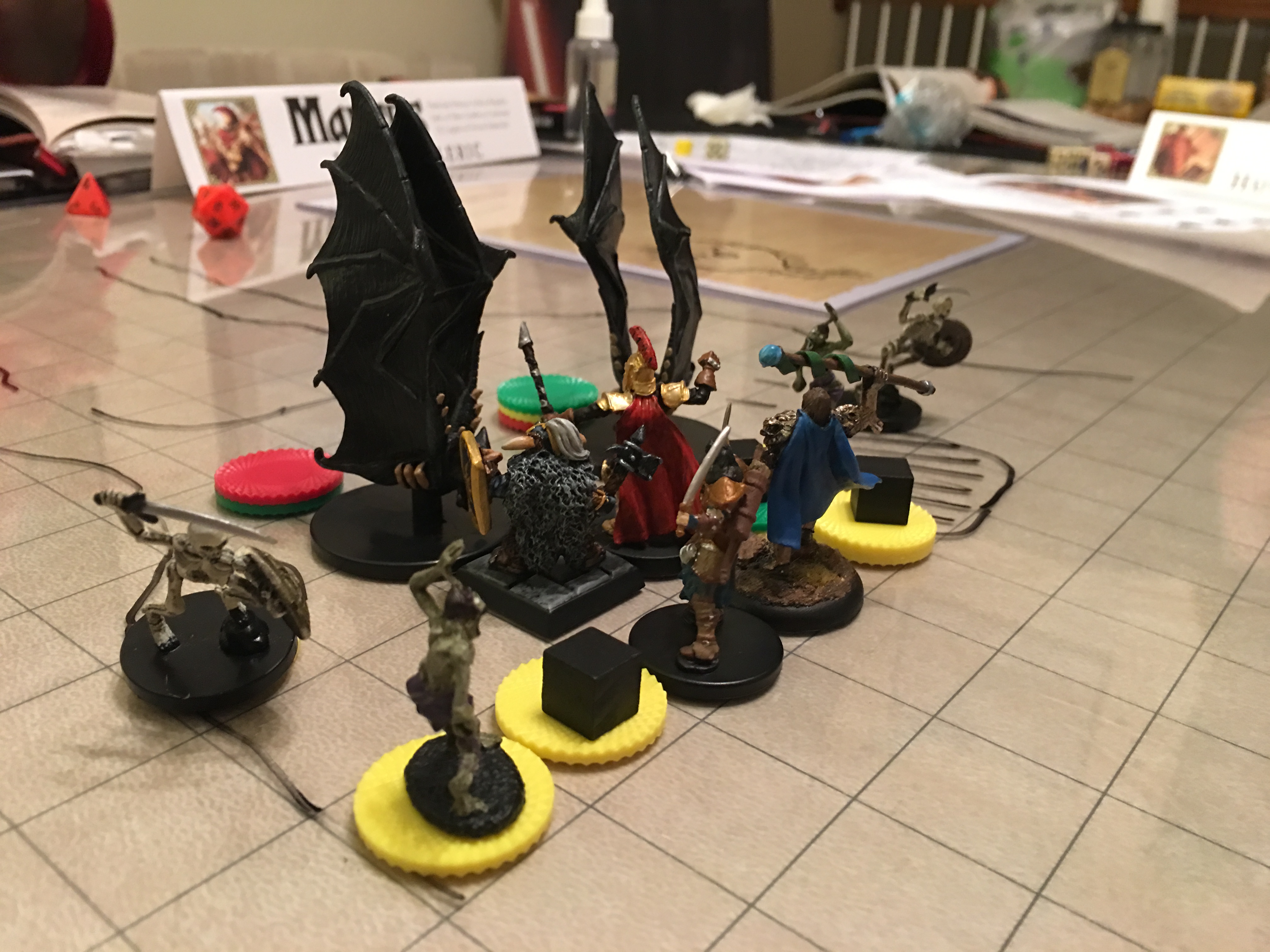 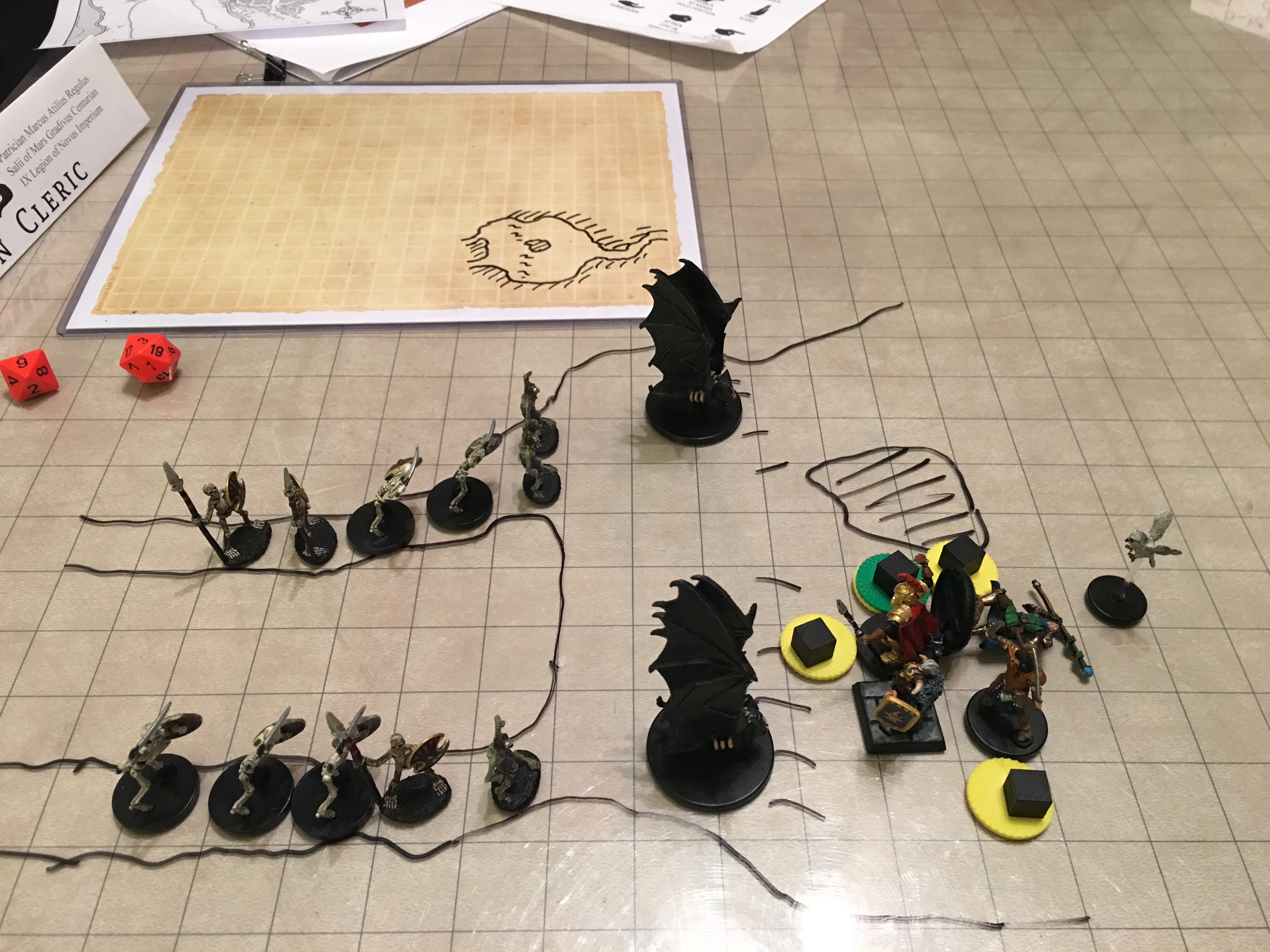 Then they find a body, of a young woman, but it’s missing her head.   There is a note written by Dubious in black coal saying “Let this be a reminder to all none escape the cave alive”.   Then we locate a scroll that says “Good Luck Alexia, I will do my best to ensure you a path to the exit,  Love Brice”

Our heroes continue to search rooms, their newfound friend and ally Duke Leopold has a unique way of opening doors, he actually……  Picks the Locks…   This is strange to our heroes, but exciting to open the doors quietly and sometimes get surprise on opponents. As they search, they ultimately capture by intimidation two slavers and freeing 6 prisoners.   Then finding a gruesome room of two crazy men and some automated hands cutting up what appears to be people.  Our heros put them to rest.  Then finally locate BART in a prison cell and reunite him with his dog.   They also free the other prisoners freeing over 10 people from this evil place as they lead them out the front of the caves, Quintos exclaims “Well Dubios I think some people have escaped alive”.

Our heroes head back into the cave, to confront the last room.  When they open the door they see a man at a table (who we latter realize is Brice) talking to a floating, burning, skull head (we latter learn is Alexia).  Thinking burning skull heads are not good, our heros quickly focus all their efforts on damaging effects, including incredible dart attacks from our new friend Duke Leopold.    The Skull shatters and the fire goes out.  We all feel a sense of sickness, death and evil as we realize the room is filled with experiments, books of vivisection, and black potions that reek of death.   After a dispute with Duke Leopold about the value of the books, our heros decide to burn all in the room. 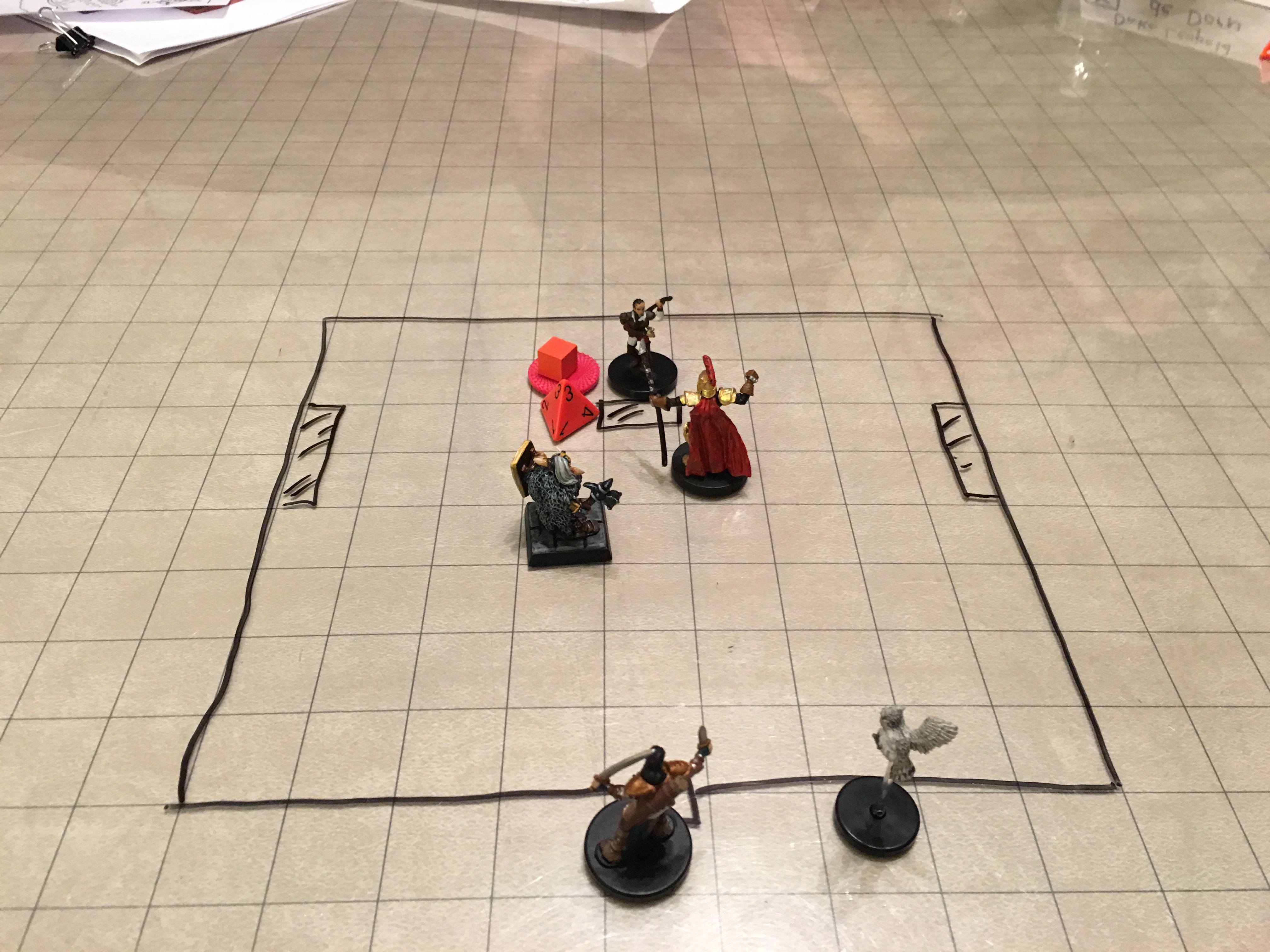 Then questioning Brice, we realize he was one of the first to be captured by Dubois the dark necromancer, who comes and goes from this place.  Lundie puts him under a zone of truth and we confirm he is a captured pawn in this nightmare, then we confirm the slavers have killed for money.   So we deliver Brice and the two slavers to the authorities for the law to handle, with the facts from their zone of truth experiences.

So as the Stone Legion entered Stonehelm the day started with smiles, flowed to drinking, we faced and created death itself and finally freed a number of citizens of Stonehelm from the evil cavern of Dubois.

The only mystery remains is where is Dubois…