Marcus returns from his day with the brothers at the Temple of the Lots just as the sun rose on this day.  He reported back that they had very little interest in discussing the relationship between their Lady Goddess and Fortuna, although the correlation is clear to Marcus.

He did learn that there are many pious people Stonehelm, people searching for a little “luck of the gods” in their life.  Marcus also learned that there is a guard house by the shore in Stonehelm and it is said that there “things move in the shadows”.

Part II: Hashar and a Horn Must Go 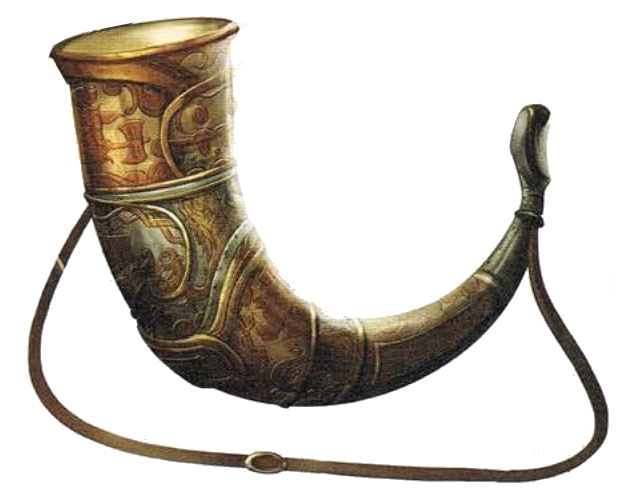 As our band of adventures extinguishes the night’s fire, Lundie makes the case that Hashar must go.  Lundie tells the story of Hashar’s joy in the desiccation of the wizard’s body from the day before.  Ivamel agrees that Hashar must be released from his promise from Marcus.  Learning of Hashar’s actions Marcus agrees that once we know that we will not be attacked in the castle from other travelers, he will release Hashar from his bond.

As the discussion over Hashar goes on, Quintos feels the strings of the dark evil of the world pulling at him.  It is clear to him that the Horn of Bugbearhalla is the source.  As the party, walks to the castle they discuss how they should dispose of the instrument of evil.  Quintos decides to hold the horn for a few more days until it can be hidden or destroyed.

As the party arrives at the castle to resume their investigation, Hashar reports with glee that no one else has entered the castle that night.  Sadly a young bugbear cub that was charged with late watch was found asleep at his post and Hashar imposed a harsh penalty.  As Marcus took down the young bugbear from his crucifix, Marcus agreed evermore that Hashar’s time with party must come to an end.

Part III: Below The Castle 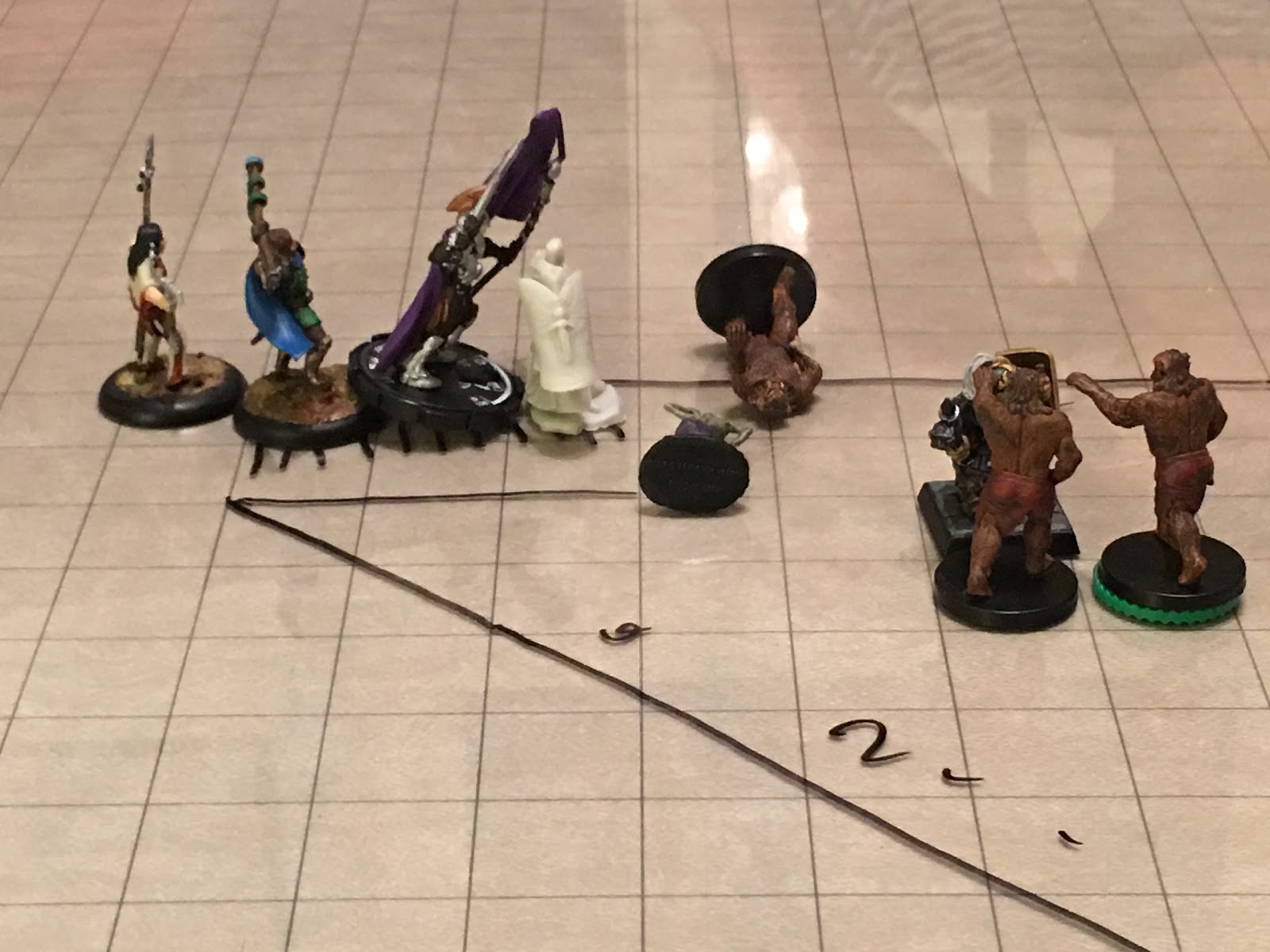 Our band of adventures form into classic dungeon diving formation and wade confidently down the stairs in to the depths.  At the first hint of ghoulish sounds Marcus blesses Lundie.  It was just the right thing as at the bottom of the stairs, the party finds three bugbears undead and one elf undead.  Marcus yells to hold to the line; Ivamel holds the line ready for action; Ghost Dancer tries to make the creatures glow but to no effect’ Lundie charges then swings and misses, Marcus and Quintos find their marks; then the undead elf and Ivamel exchange blows, Ivamel is paralyzed by the foul creatures undead pallor.  From there the group rallies around Ivamel and quickly dispatches the four undead.  They find loot in the room and share it amongst themselves. 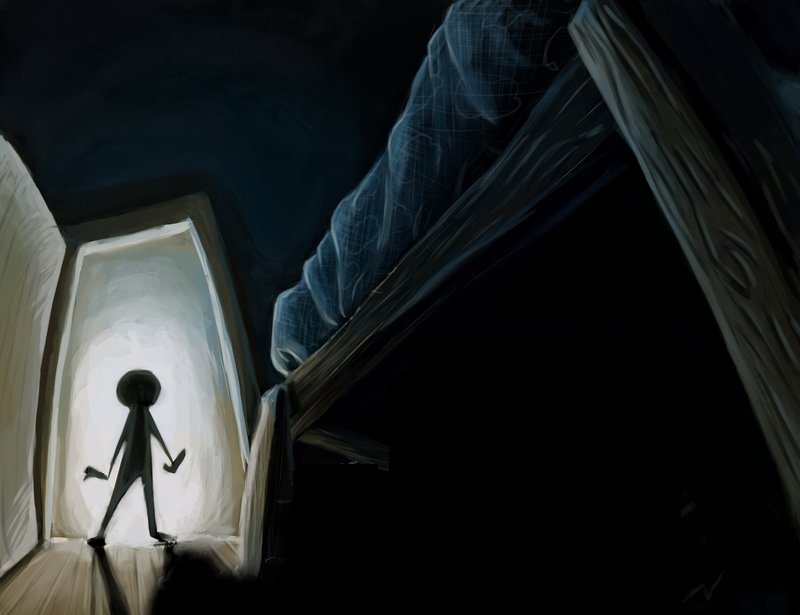 The party winds their way through the rooms below and find themselves in what appears to be a grand bedroom.  As the party searches the room, Ivamel and Ghost Dancer find a secret door at the back of the room, at the same time a ghoul under the bed reaches for Marcus who is able to leap back in time.  As the ghoul appears from under the bed, only Marcus fights back the fear of this creature of undead evil.  Through his fear, Lundie is able to summon the shining light of Moradin; and as the symbol of Moradin shines brightly on his shield the ghoul runs for the secret door and right next to Ghost Dancer and Ivamel.  Encouraged by the shining light of Moradin the rest of the party is able to break their fear.  Ghost Dancer is able to make the creature glow to aid his friends in fighting the ghoul.  Lundie charges, his warhammer glowing with the vengeance of Moradin and strikes the creature a mighty blow as radiant light fills the room as Lundie connects.  Ivamel seeing that the creature is affected and that Lundie could swing again yells out to Lundie to quickly strike again and he does, light again filling the room as Lundie hits again.  Seeing yet another opening, Ivamel quickly thrust his rapier into the side of the ghoul and it disintegrates with a pop.

With the ghoul dispatched, everyone entered the room behind through the secret door and seeing a statue of a giant with a chalice at its feet.  Its eyes started to glow and it came to life; only Ghost Dancer was fooled by this illusion.  With quick thinking by both Marcus and Quintos, they were able to free Ghost Dancer from the mental prison of this illusion.  Marcus as a good friend would do was able to lead Ghost Dancer out of the room and Quintos grabbing the chalice and filling it with water, found the water to be holy and convinced Ghost Dancer to drink from the chalice.  The party destroyed the statue, kept the chalice, and continued down the stairs they found in this room.

Descending down 20 more feet the group finds a set of hallways, one leading to a natural cavern area.  The group spots what they assume is a magical staff in a small cave that only has an opening that is 2 ½ feet high.  Ivamel tries to fish out the staff with a grapple and rope.  He almost succeeds when the desire to obtain the staff overcomes Quintos.  Quintos crawls into the cave and as soon as he grabs the staff a monster drops from the ceiling dissolving his armor and trying to attack his handsome face.  Marcus pulled Quintos out of the cave, Ivamel rushes over and while using his newly acquired shield to cover Qunitos’ face, slicing the monster in two pieces.  Quintos not knowing the monster is dead releases dark magic with black tentacles reaching out and hitting his allies.  The monster dead, the party licking their wounds, Quintos examining his newly acquired ornate staff; they head back to camp for another night’s rest. 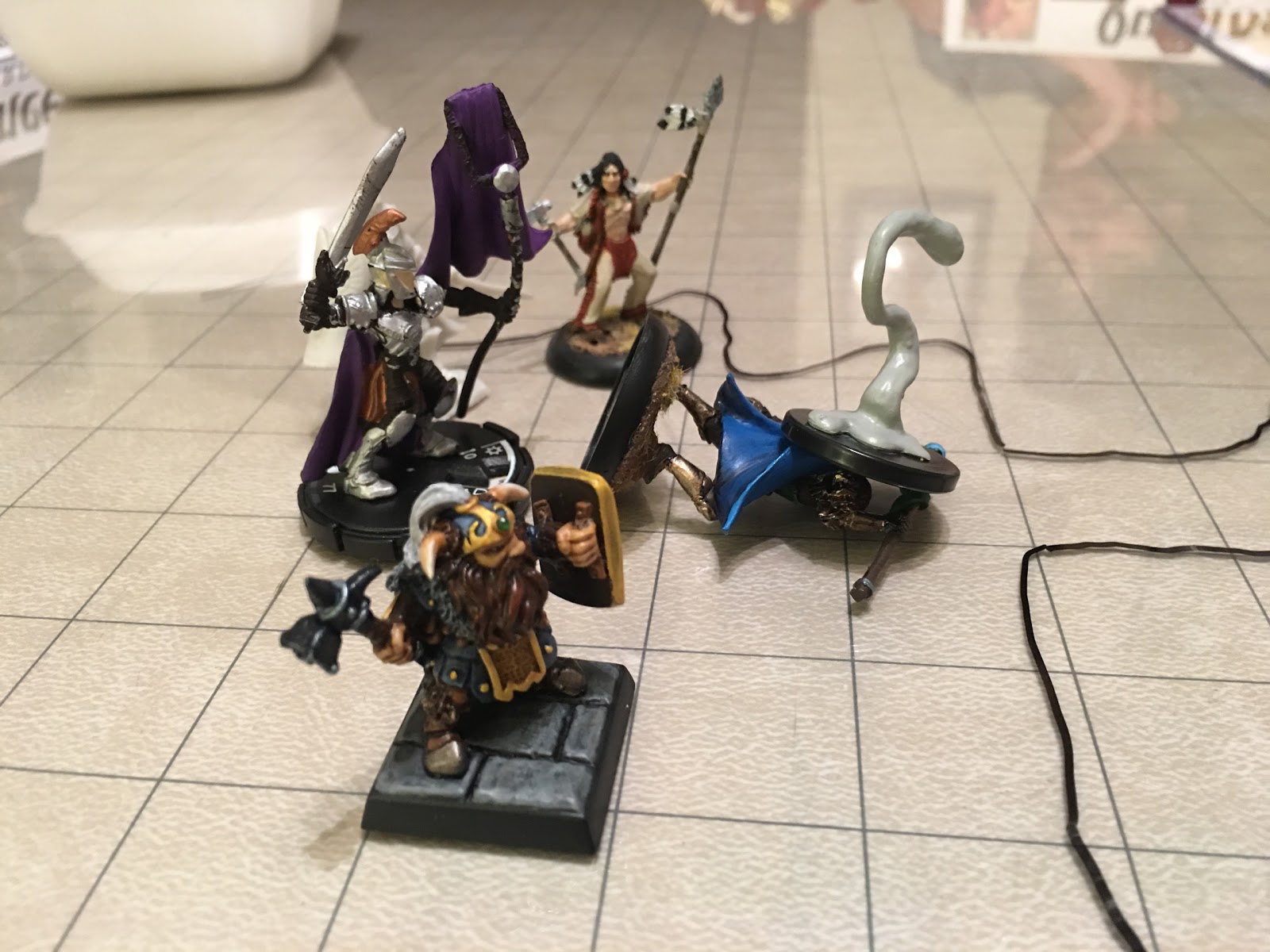