Last game the heroes made it to the big city. The electric fences went down; who would have thought? 🙂 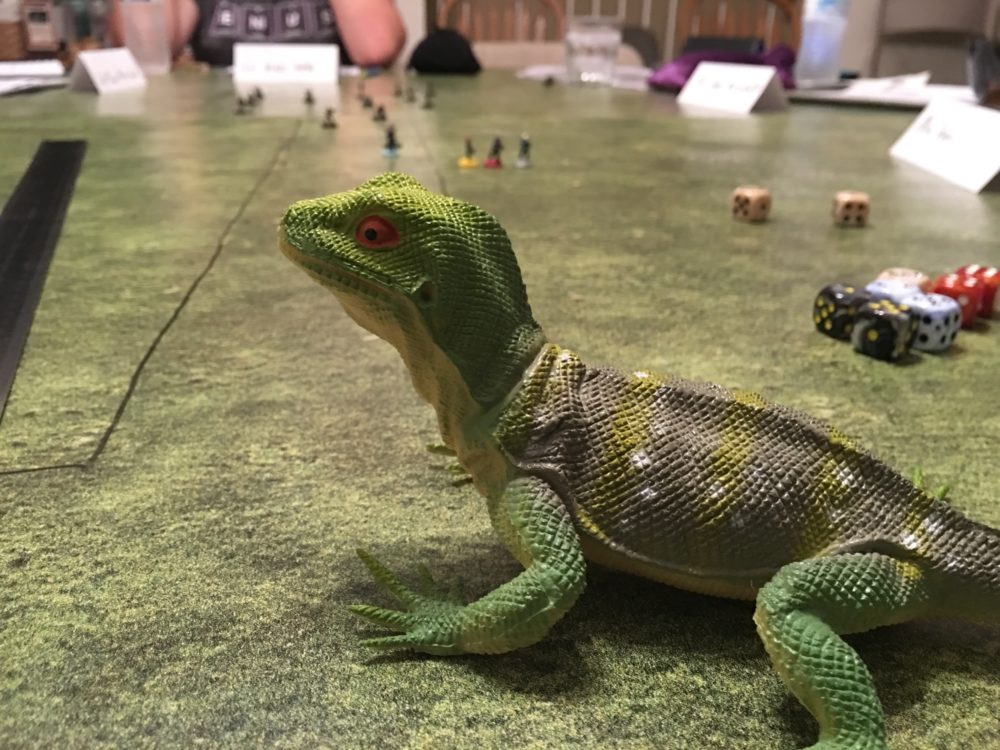 An A-Pex terrorizes the city. Can our intrepid heroes save the civilians? 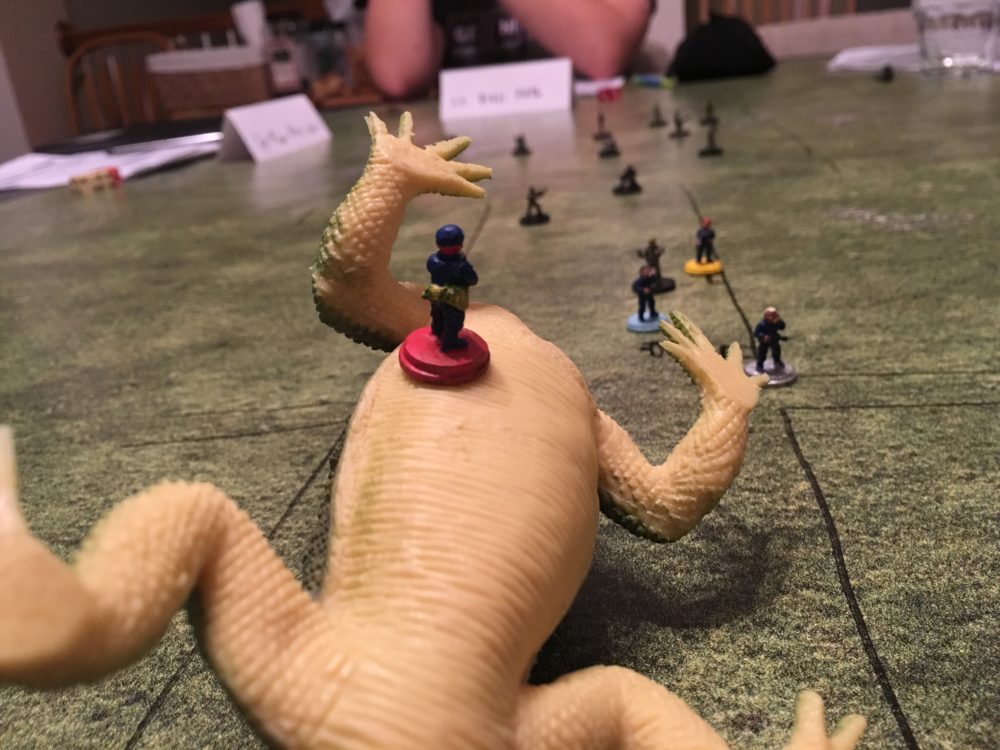 Emory lands the killing blow! His character poses for a shot 🙂 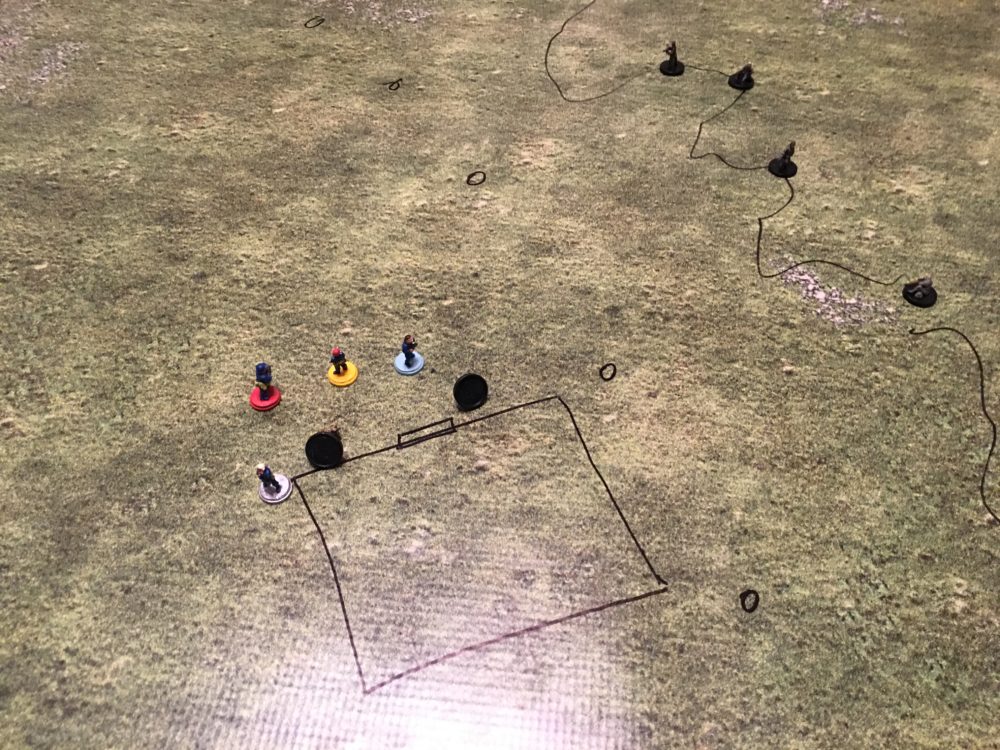 Later, the heroes go to repair a power generator and are ambushed by Natural Order (N.O.) terrorists. One survived: what will the characters learn once he regains consciousness?

Folks have been asking me about the battlemat I’m using for my Traveller games, so I thought I’d describe how I created it. Not terribly hard to do so give it a try! 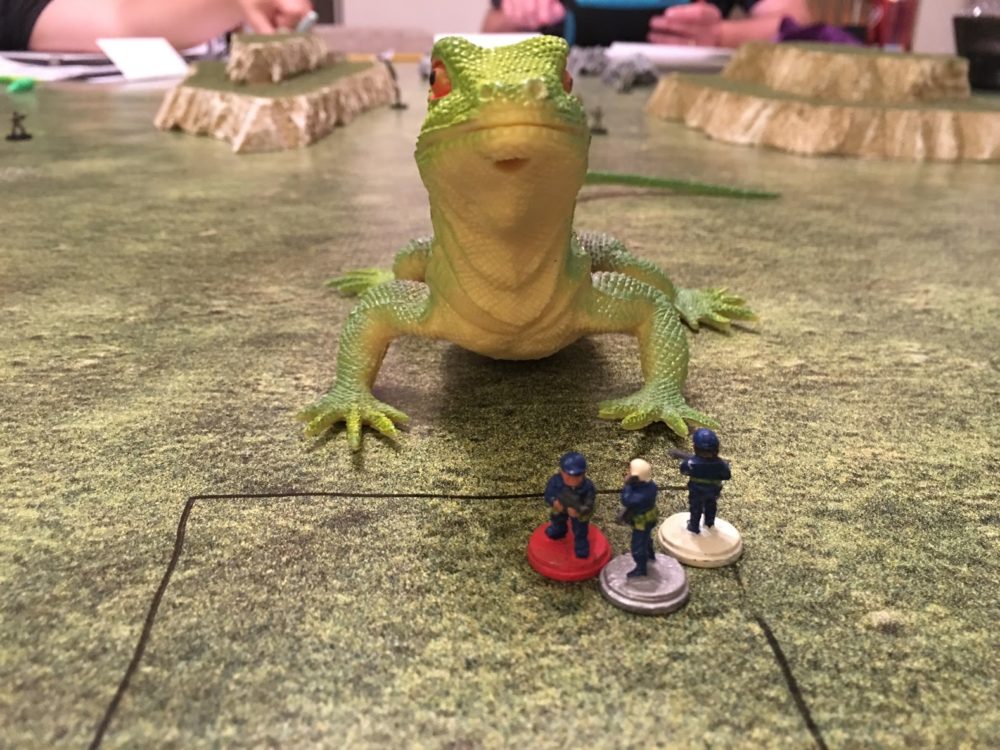 15mm Miniatures on my Vinyl Battlemat.

I like to do DIY (do-it-yourself) terrain and RPG tools. I’ve got a couple of campaigns coming up that use 15mm miniatures. The standard 1″ grid maps used in 28mm won’t cut it when using miniatures in this scale. I like 15mm for games where shooting with modern weapons is a focal point and you need to make ranged weapons meaningful (28mm is better for Fantasy / melee combat, whereas 15mm miniatures let’s you take advantage of differences in ranged weapons).

I wanted something portable, something that I could quickly set up, and that didn’t cost a mint. I settled on creating my own vinyl battlemats and printing them from BannersOnTheCheap.com.

Vinyl itself is a great material for battlemats. Its strong, durable, and lets you write on it with dry or wet erase markers.

I bought the map image file from WargamePrint on DriveThruRPG. They have a full selection of battlemat images with all sorts of terrain ranging from deserts to jungles to seas. You can get their test printable files download for free to check out their terrain. It’s amazing! 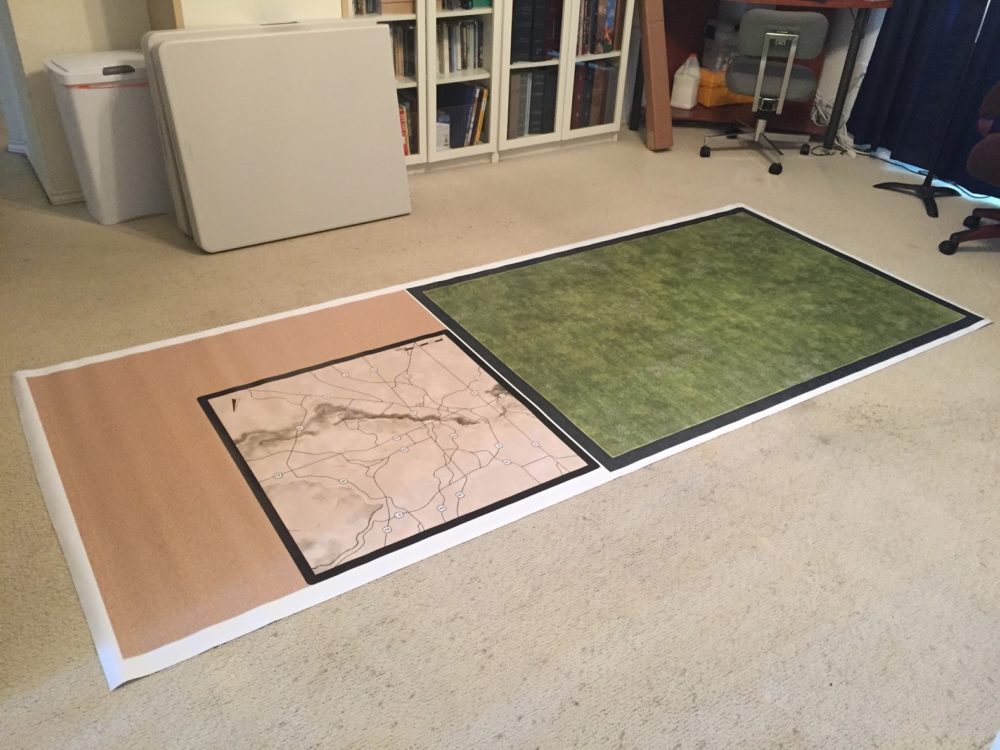 I decided to print out a 4’x10′ banner, which lets me get two battlemats for a total of about $40 plus S&H and tax. The tan / sand texture I’ll cut up to be ‘roads’ to lay down on the grassy battlemat. 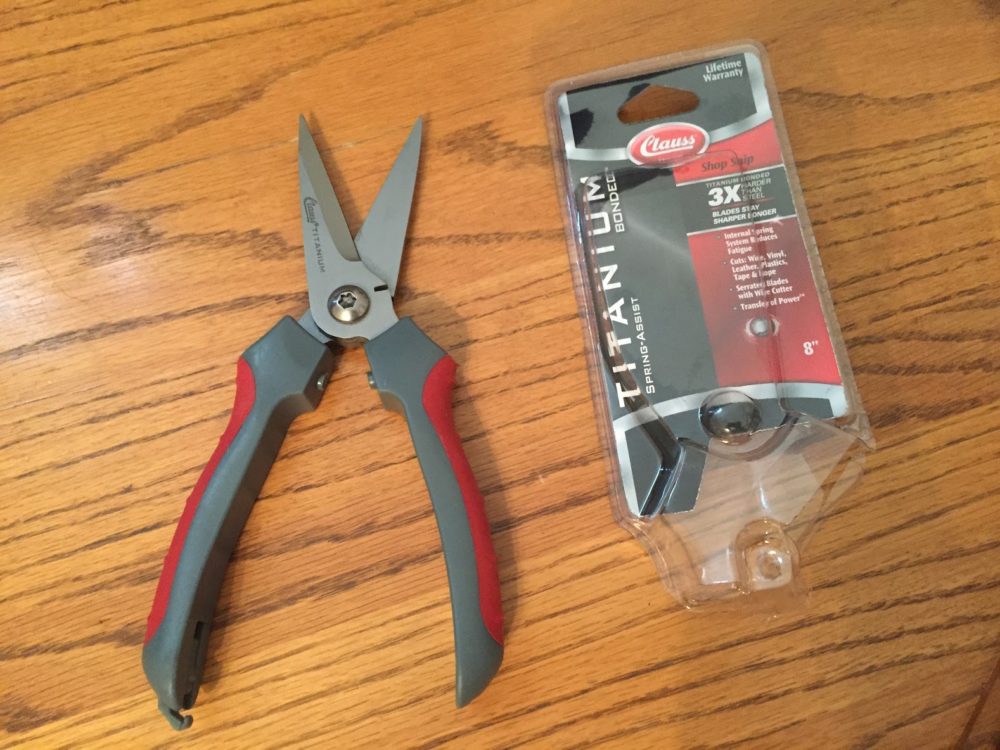 You’ll want some heavy-duty Vinyl Shears to cut the material. 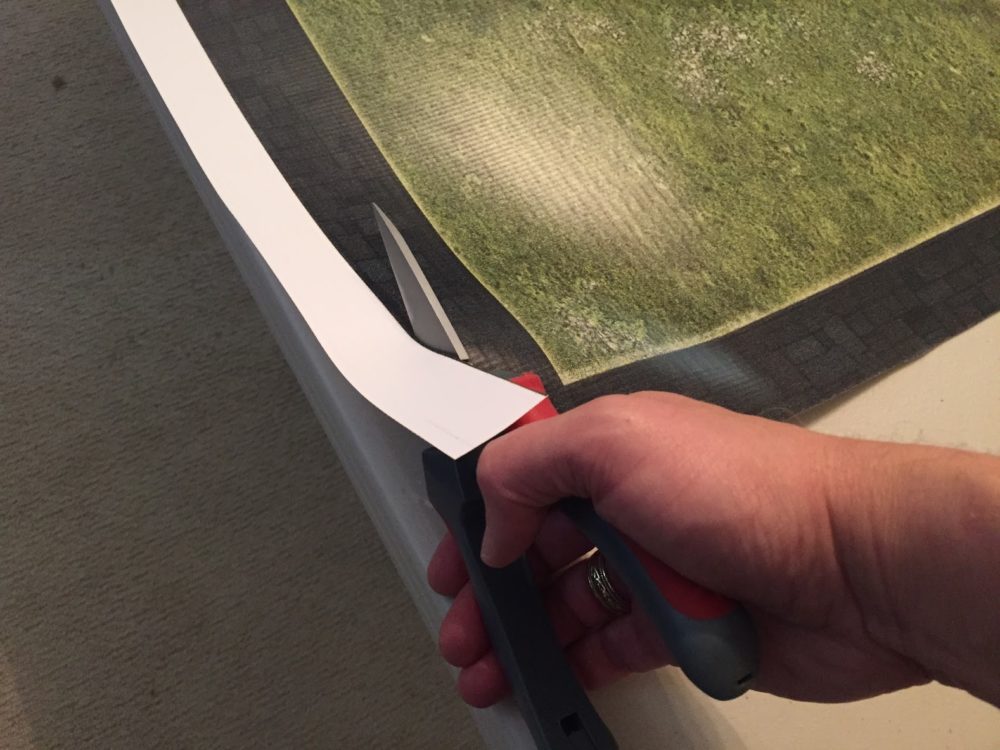 Trim off the edge

I used Gimp (Photoshop also works) to stitch together the enormous map files into the big 4×10′ image. I sized them so that they didn’t stretch to the border since BannersOnTheCheap doesn’t do a ‘bleed’ that prints to the edge. Use the shears to trim the edges and cut up what you want. 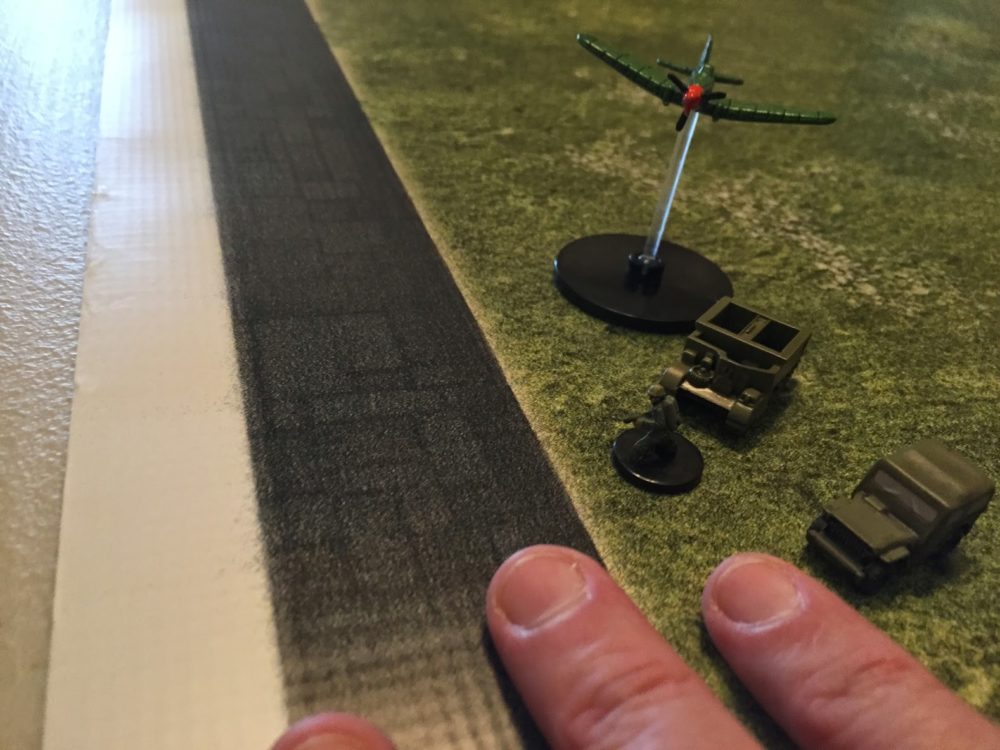 One thing to be aware of, the printing quality is a bit grainy. It’s always this way (I’ve ordered multiple times from them). Not a big deal though, from a few inches away you won’t be able to tell very much. 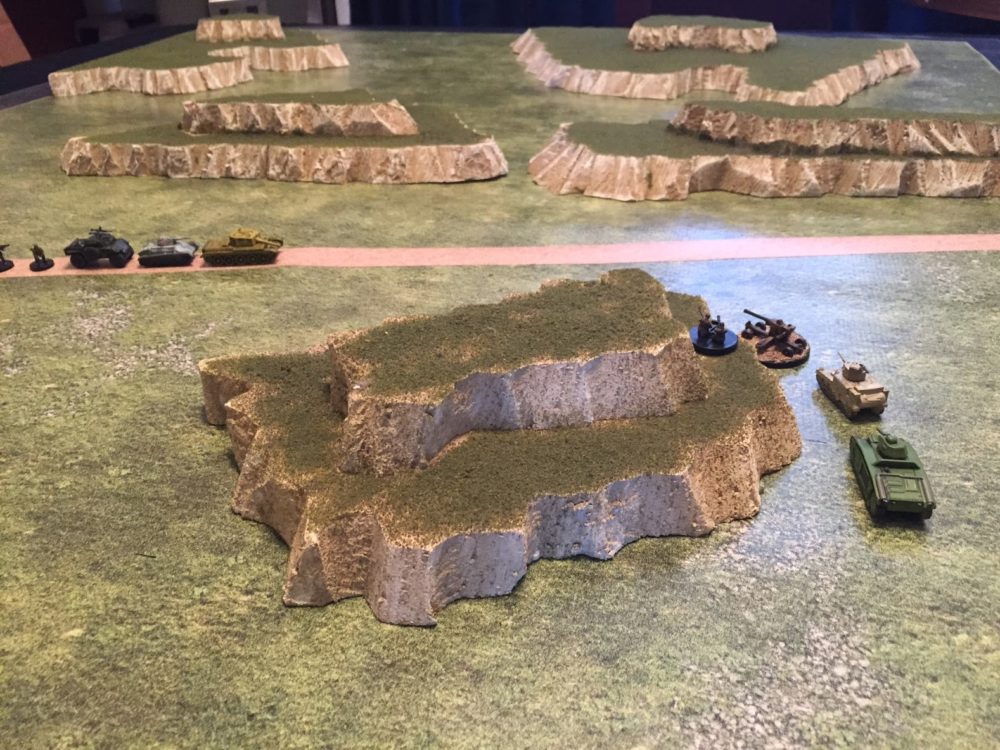 Here’s the sand vinyl strips cut up and used as a road that I laid down on top of the grassy mat. 15mm miniatures and some DIY terrain on top finish it off! Battlemat on my game table

Here’s the final product on my gametable. Want a gametable like this? See my blog post on creating a DIY stowable game table. 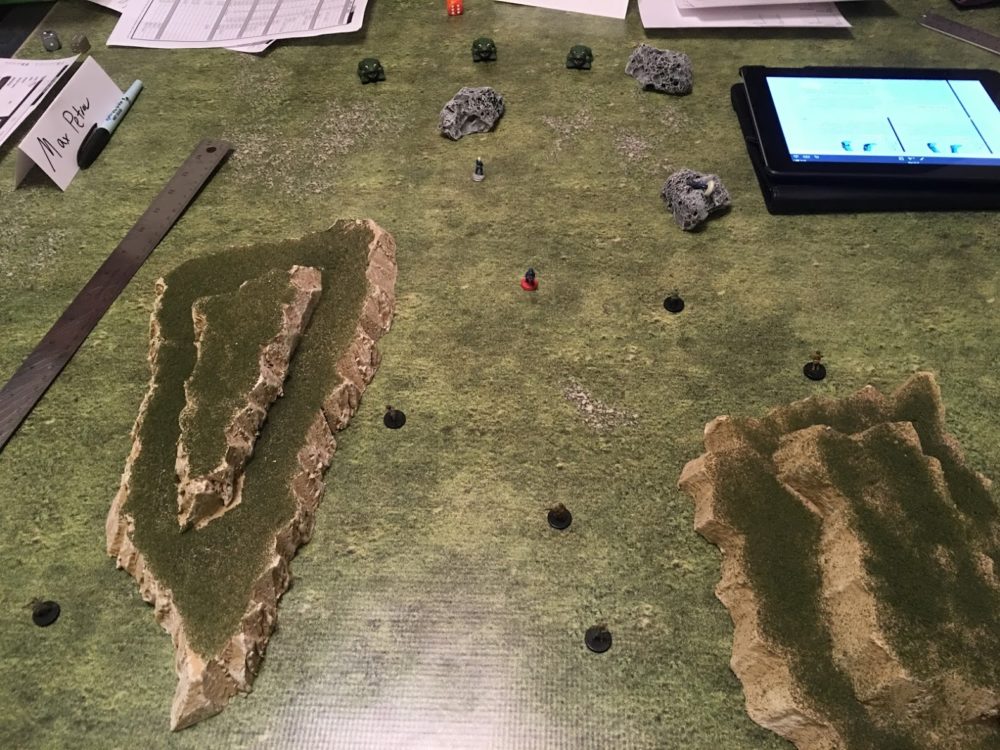 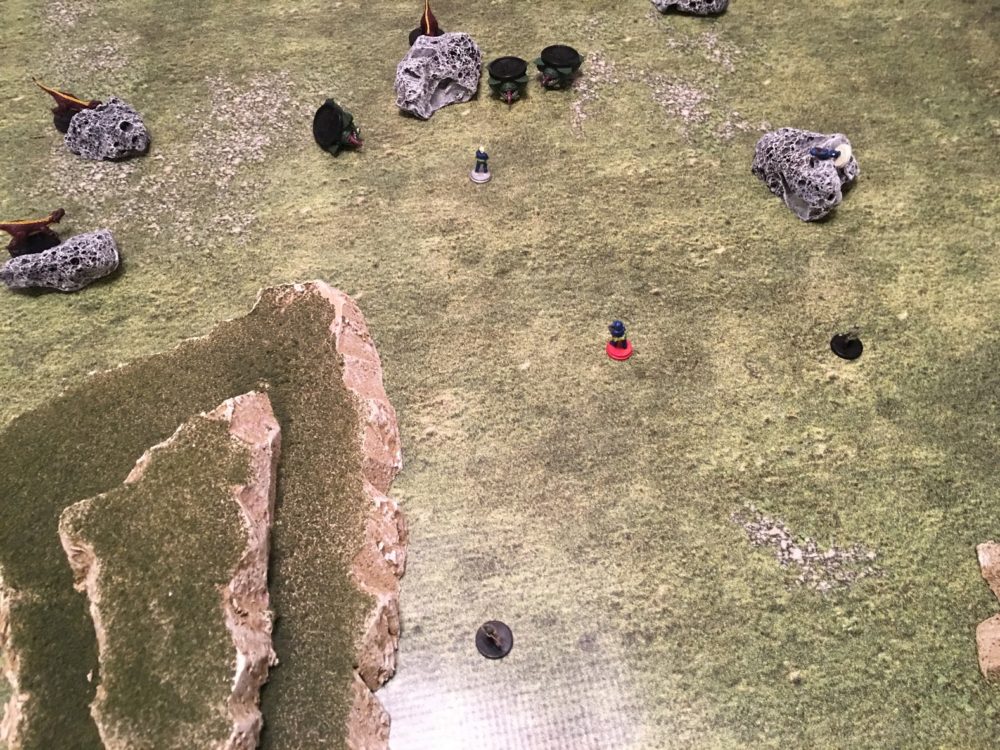 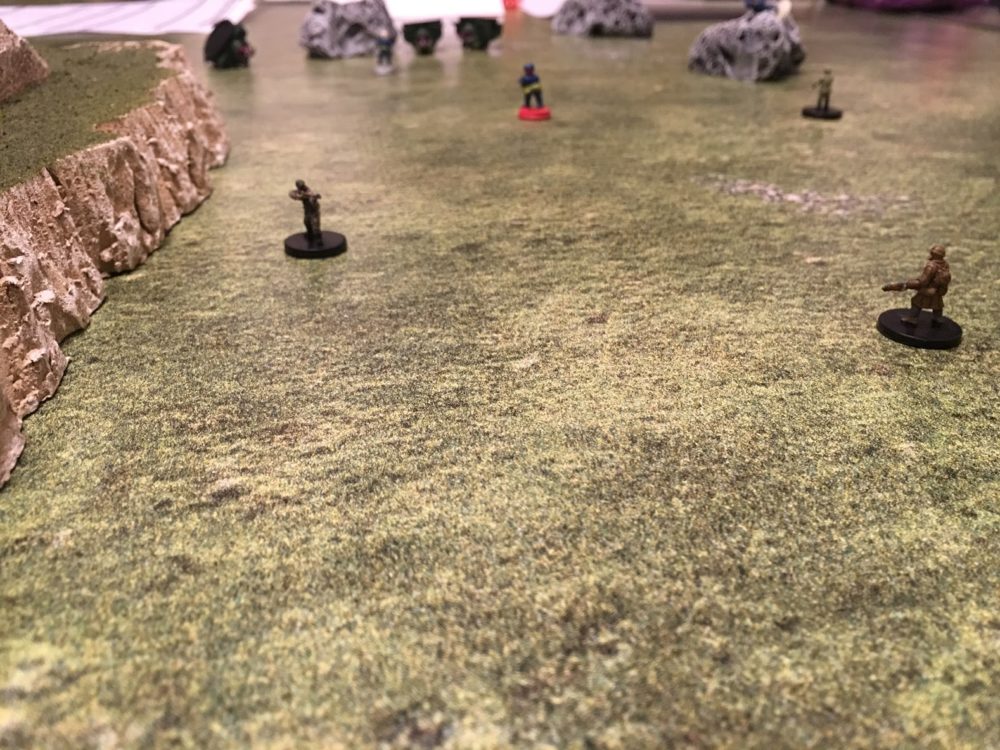 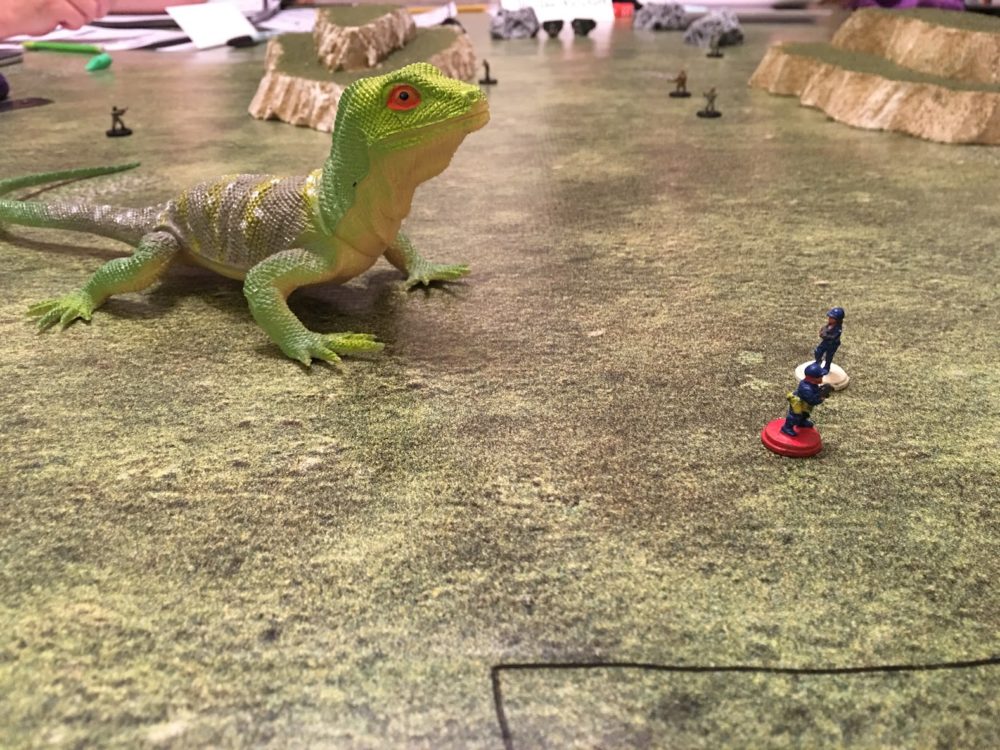 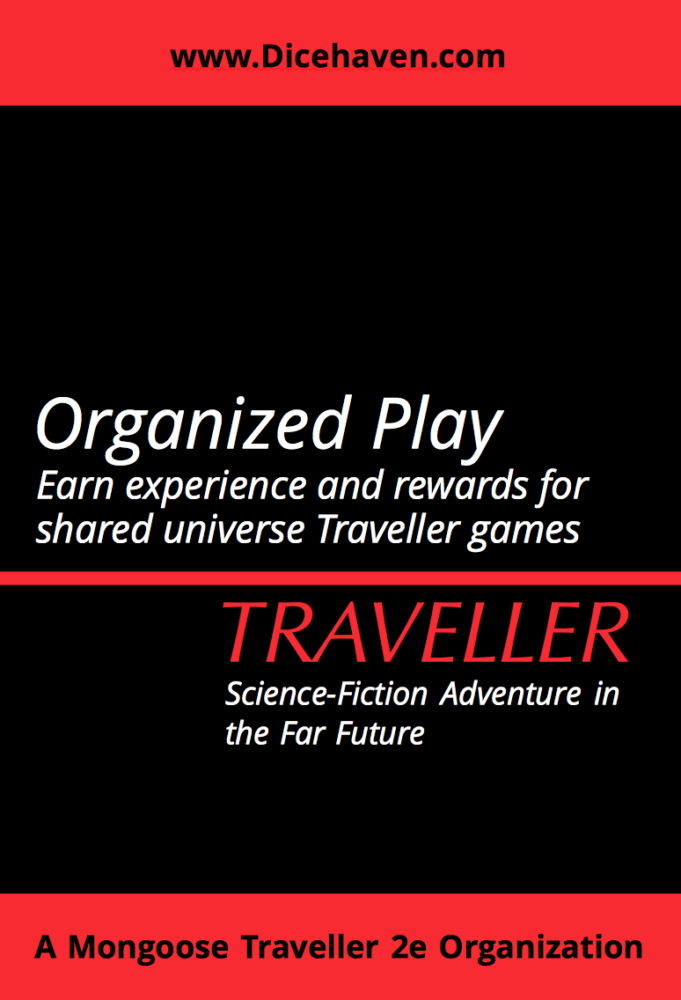 Inspired by Adrian Romero’s blog post at http://redbox.wikidot.com/meta-traveller-acheivements, here is a system of Organized Play I’m proposing for upcoming Dicehaven Traveller games. [Update: after consulting with Mason we determined the XP and Bennies sort of ‘break’ the hard sci-fi feel of Traveller, so we won’t be using the XP/Bennies parts, although we will be doing the shared universe].

There will be a shared Imperium universe. If we have multiple campaigns, mini-campaigns, or one-shots, they all take place in a common Imperium setting. GM’s normally should select a different subsector and will have full freedom of play in those isolated areas of the galaxy. To prevent disrupting other concurrent campaigns, GMs should not introduce setting-wide events (such as extinct-events, new sentient species, secret origins of a species, or a civil war that spans the Imperium) unless first consulting other current GMs.

Other universes and IPs (such as Star Trek or Firefly) also qualify for Organized Play and player rewards so long as 1) the group approves and 2) the games use some version of the Traveller rules.

Imperium players accomplish earn experience points (XP) and increase their Imperium Player Level. Player receive Bennie levels at levels 1, 3, 5, and 7. These bennies can be used in any Imperium game. A player at level 5 had 3 bennies, meaning each game they start with 3 bennies they can use in all Organized Play games. At levels 2, 4, and 6, the players receive a Windfall which is cash or another benefit they can apply to the single character of their choice.

A player who achieves 251 or more XP immediately loses 250 XP and again becomes  a Level 1 Player. The player should consider retiring their most experience character, though this is optional.

Once players restart levels, you can differentiate player advancement through the use of Ranks. A level 1 Veteran is slightly more experienced player than a level 7 Explorer, even though the level 1 Veteran has lower Bennies at the moment. Higher ranked players have greater bragging rights 🙂

These work similar to Savage Worlds bennies — you get +2 or a reroll on any die roll (but you can keep the better of your two die rolls).

At present this would be a roll on the Mustering Out benefits for your career (your choice of Cash or Benefits). I might replace this with a new Windfall table. If we add a Windfall table, here’s how it would work:

Roll on the Windfall table. Reroll any result that you’ve achieved before during your current level progression. Apply Windfall results to the character of your choice.

A player can have a Major Goal for each character. You can have at most one Major goal at a time for a character, and can replace it with a new goal after the current one is resolved.

Three or more players may determine a Major Goal for their team. The characters must have been been together for at least one game session.

I believe I’ll run this Classic Traveller game next year… 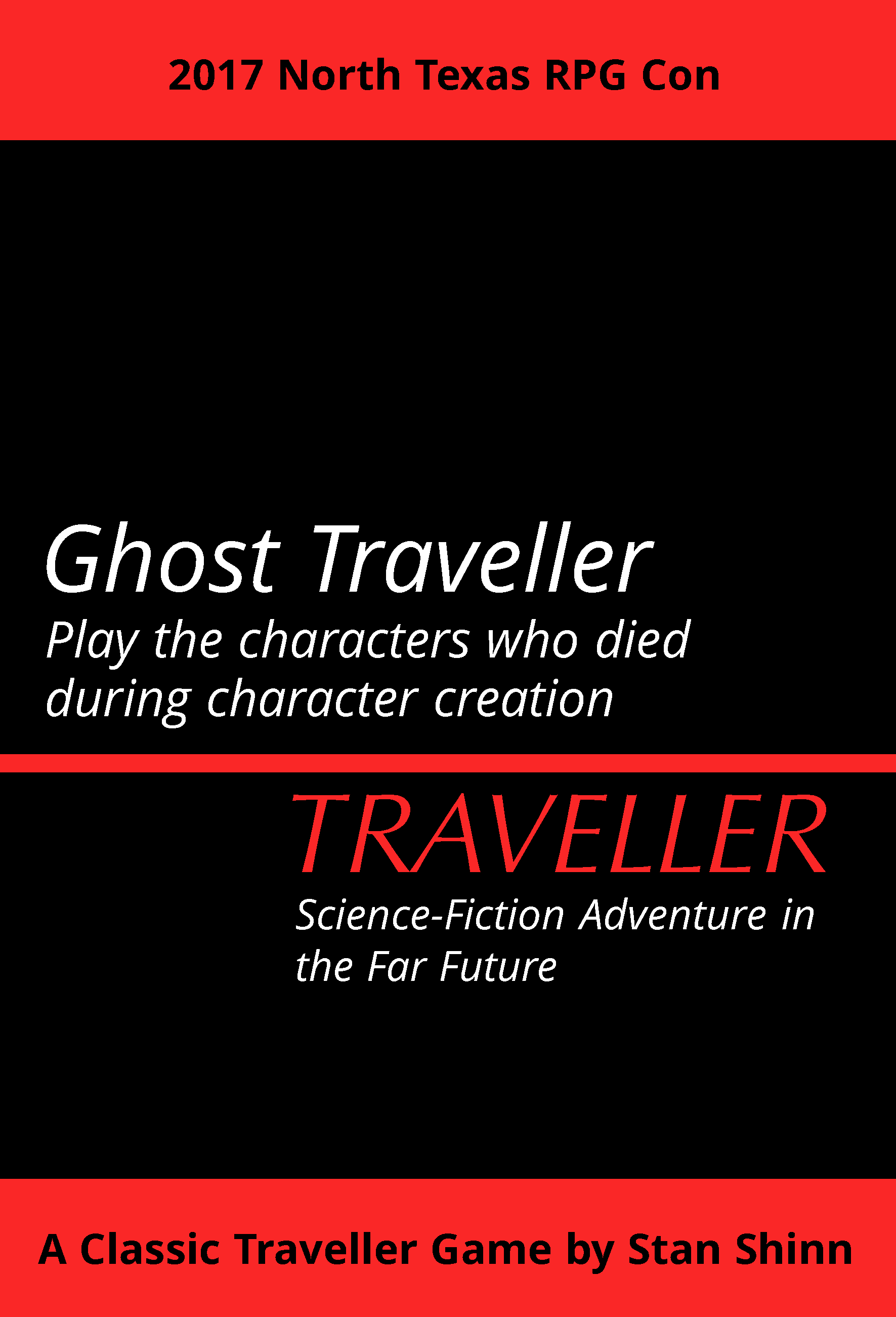