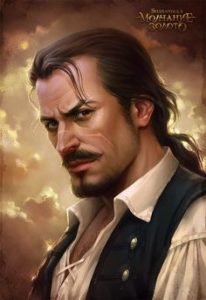 A Visit to Baltimus- Part 2-  The Death of Bruno

While the rest of the Crew attempted to impress the guests with tales of their valor, Bracus entered the fighting pit. He did quite well against a band of yellow backs, troop of monkapes and a single poisonous TorethKa Spider. This greatly impressed the crowd and Bruno who invited him and his friends to the exclusive after party.

The Crew attended the afterparty and discovered that Bruno left his late father’s possessions in his chambers, untouched since his death. Daxon and Rodrigo needed a distraction to search for a diary and Mordecai incensed by the debauchery taking place was happy to help by intimidating and scolding Bruno. When Bracus joined in the debacle, Bruno snapped with fear. Grabbing a young human woman  he threatened to kill her if the Crew didn’t leave. As Bracus advanced Kal summoned a fire elemental behind Bruno and terrified he slit the girl’s throat. Chaos erupted as the rest of the Crew jumped into the fight, as well as Bruno’s friends and the guards. In the end Bruno met his fiery death but it gave time for Daxson and Rodrigo to recover the journal and escape.

All told several guards, guests and Bruno were left dead and alarm bells rang in the night as the Crew fled the manor.