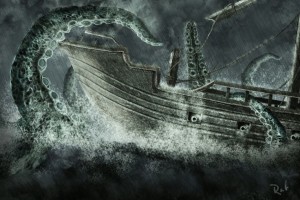 With Crow provisionally in charge due to mysterious food poisoning that affected most of the senior staff, it was decided to depart Brigandy Bay. As the ship sailed nearly out of sight,  Mordecai spotted a gang of cutthroats rushing up to where they were previously docked and looking for something and/or trouble. Seems the ship left just in time to avoid another conflict…

Crow decided to sail north and due to a navigational error ended up off course and into the Flotsam Sea. Unfortunately the ship stumbled upon a group of Octopons. Luckily Crow was wearing his magic ring and was alerted to the danger before the Crew could be surprised. A fight on the deck broke out as  Octopons attempted to disable to the ship and kill as many crew members as possible. Just as the tide appeared to be turning for the Crew, huge tentacles gripped the side of the ship and snatched Mordecai in air. A Giant Octopus appeared out of nowhere and appeared to be under the control of the Octopon Warlock. The giant beast tore at the ship, killed several crew members but was no match for the combined might of Mordecai, Crow and Kaliferious. As the giant creature pulled himself onto their ship and wreaking havoc in the process, the Crew managed to wound the creature and lower its defences. Kaliferious recovered from a blinding ink jet just in time to let loose a fire blast upon the Octopus. Fortunately this blast set off some powder kegs which caused cannons and shrapnel to fly into the beast’s head mortally wounding it. The day was won but at further loss in life and damage to the ship.

Setting sail towards Baltimus the ship narrowly avoided a magical storm coming from the center of the Flotsam sea. Inside of the gale the Crew was chilled by the sight of the ghostly vision of the Flying Dutchman. Fortunately, it was far enough away not to cause danger but the Crew now knows first hand that deadly horrors lurk in the Flotsam sea and that their destiny is to head to its heart one day to face the Hags.. 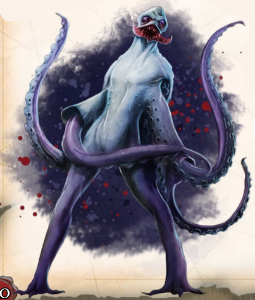 Considering your extensive training and experience with all aspects of ship command, I believe you will find this report one of notable and personal interest.  Primarily how recent events highlight a particular peculiarity with this crews command structure.

Owing to a relatively severe bout of food poisoning the ship found itself without a captain.  The events which ensued from this innocuous incident where anything but.  Instead, we found ourselves temporarily lost at sea and fighting the dark minions of the sea hags.  The crew remained true to their standard performance in such situations.  In turn, I find my confidence in their abilities for the great trials which lay before us to be in a persistent state of growth.

Ultimately, we suffered this temporary setback as a result of a highly limited command structure.  One that is exceptionally informal.  The captain has yet to choose a first mate.  Additionally ,the owners of the vessel, which are all aboard her, have not established any type of ancillary command structure among themselves.  Consequently, we found ourselves with no clear chain of command when the captain was incapacitated.  This void left open the door for our youngest crew member, Kadian, to take command.  In consideration of commanding a vessel, his skills are inadequate.  Inevitably, this deficiency caused a near disaster when we became lost.

I will note that however inexperienced Kadian may be in the necessary skills for a ship’s officer, he does everything with the same level of passion and dedication characteristic of great leaders.  With training and discipline, I believe he would make a fine officer.  I intend to speak to Captain Daxson about this.
Kaliferous, Archmage of the Kraken Fleet