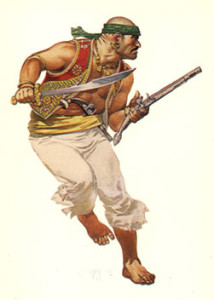 Captain Abdullah and the Unmentionable Wound

The Crew secured a new ship(Brigantine), named it the Liberators Wrath and set sail southward. The plan was to buy, sell and find crew along the way south towards Brigandy Bay and then from there set off for The Teeth and to find Tressa the Red.

Along the way they stopped off in Swindon to pick up crew and cargo. Liam and Daxson were in the bar recruiting sailors when Liam was approached by downtrodden looking Kehana named Winston. Winston offered to sell Liam a treasure map and a golden triangle he stole from his former captain, Abdullah.

Unfortunately before Liam could get more details Captain Abdullah showed up with two of his top lieutenants and a gang of his pirates. Abdullah proceeded to attack, which lead to a frenzied alleyway fight. Daxon squared off with a one armed Grual named Longarm Hunk Bosun who had a Battleball attached to his nub. Liam fought a French pirate named Rene the Blade and Bracus decided to kill Winston, pick up the loot and head back to the ship to take a nap. Liam was wounded in the thigh and “unmentionables” during his spar with Rene which certainly left some scars…

A long bloody battle raged in the alleyway and the group managed to dispatch Abdullah’s lieutenants but not before he managed to slip out of the alley and flee. Unfortunately for him the pair was faster and managed to catch up and slay Abdullah as he ran.  Swindon isn’t the safest town and the locals and lack of city watch allowed the Crew to leave the city unmolested.

The map they aquired show the location of an island in the Flotsam Sea and was labeled “Rufus’ Island…need all six triangles”, that along with another triangle to add to their collection. Armed with this new information the Crew sailed for Brigandy Bay for the final leg of their journey before they headed southwest to The Teeth.

It’s been a long haul, but we’ve finally replaced Liberator.  We’ve given the new girl a right proper name;  Liberator’s Wrath.    With a name like that and our growing reputation, we’ll soon be striking fear into the hearts of any who would dare oppose us.  I would also like to make note of the promise I’ve made to myself.  For the sake of posterity.  I’ll never again let some nobody pirate scum take our ship like that.  Even it cost my life.  I haven’t said as much to the crew, but I think they know.  I’ve overheard bits of their whispers.  Apparently, I’ve become a vengeful man.  Enough so that some of the men are more afraid than usual of crossing me.  As long as it serves as motivation for hard work, it’s acceptable.

About this alley fight we found ourselves in.  It really all boils down to a simple thing.  One pirate tried to sell us something he had stolen from his pirate captain.  When the dust settled and the smoke cleared, we stood victorious, and in possession of a another piece of the triangle and a map that might lead us to Redbeard’s treasure.  Not a bad night really.  Even given my two new scars, which gave me a bit of a fright.  Plus, any fight that shrinks this world’s pirate population is always a good one.