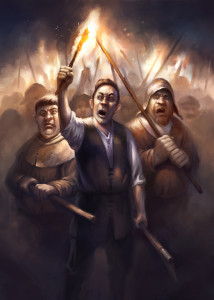 After the defeat of Ian and the freeing of the slaves the Crew discovered that he had been working on a cage to capture a Yellowback for bounty from New Madrid. The city was offering a tidy sum for a live specimen..

Mourning the loss of his four warriors Eti was anxious to present Ian’s body to the spirit of his father Jomba and free him from his torment. Waiting till twilight the Crew and Eti laid Ian’s body on the road and when the sun set Jomba appeared. This time he was in a more corporeal form, of his own mind, and able to talk. Jomba was grateful that Ian was killed but unfortunately his curse was for him to slay Ian on the Ghost Trail…not for others to do it. While Jomba retained his mind he was bound forever to the Ghost Trail. He vowed to protect the Trail from those who sought to bring harm, but could not linger in one place too long and drifted off.

The Crew decided to help Eti take over Jomba Town from the Council and started their march back up the trail towards Jomba Town. On the way back they remember Ol’ Owens tail of the “Money Pit” and Bracus convinced the Crew to spend some time digging it up. They found digging in the pit to be a dangerous and futile endeavor but also discovered that the pit was somehow leaking sea water. Daxon, Eti and Liam explored the flooded cave systems under the island and while fending off schools of BloodFish found the underside of the Pit and the Treasure! Through some heroic underwater work the Crew was able to gather the treasure intact and be on their way.

Far richer than before (to Bracus’s delight) the Crew made it to Jomba town.

Liam used his buddy that worked for the council to arrange a meeting to discuss their payment for solving the Ghost Problem. Liam was also warned to keep his priest friend from stirring up trouble with his soup kitchen.Of course Rodrigo would hear nothing of the sort and set up shop next to the Council favorite tavern, the Shackle.

In response, the Council sent a heavily armed group to attack the priest but the Crew was able the turn the tide, kill the thugs, and get the locals to take up arms against the Council. In full riot mode the Crew lead 200+ locals and Eti’s people against the armed fortifications of the Council. Through bravery and some bloodshed, the mob was able to overrun the city and capture all but one council member (Crimson Sparrow- Kehana). The Crew set up a court to judge the Council members but at this point are unsure how “fair” the trial will be. While the rest of the Crew were mopping up resistance and capturing Council members, Bracus found his way to the town’s money vault and made sure to secure the promised bounty payment (with a bonus) before turning it over to the people. Eti provided guards to protect the wealth while a government was formed and things settled down. 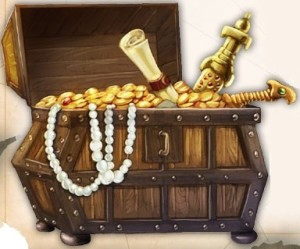 Jamba town has shaken off the shackles of tyranny.  For many of our group, slavery was the issue.  It even changed Mordecai a little.  He’s crossed a line very few men come back from in his pursuit of ending slavery.  I always found the tyranny to be the real evil corrupting Jumba.  A council that wasn’t elected by the people ruling over its subjects like some puppet master, who’s only concern is growing his own wealth at the expense of others.  Not any more.  Jumba’s citizens now rule themselves.  I only hope they do it well.

As soon as we finish our business here, we’ll be off to New Madrid.  We’ve finally managed to save up the needed funds for a new ship, and there are plenty of options in that port.  While this skiff has been good to us, it barely qualifies as a ship.  The brig we’ve had our hearts set on does, however.  It may not be a ship of the line but they’re fine vessels, and can accomplish a great deal with the right captain and crew.

It’s safe to say this is one of those rare times where everything seems to be going our way.