Empty Seats on the Deck 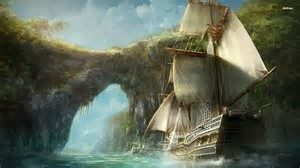 It has been a while since I wrote to you, lo siento. We sail for an uncertain destiny, and as I sit on the deck of Liberator’s Wrath, I find myself looking for my friends. Crow and I would talk for hours on the scripture. He asked a thousand questions, and I confess to not having an answer for every question. I look to the wheel for Captain Liam, turning us towards an enemy when we should sail away to fight another day. I turn to ask Mordecai a question about the Americas, but catch myself before I speak too long. Daxson is at the helm, and we have sailed together for a long time. I trust him and his sailing abilities. Liam would be proud of our course right now, straight at the enemy. We have the sword, and are determined. But with so many friends absent, I feel an uncertain future. To Quote Don Quixote: “Destiny guides our fortunes more favorably than we could have expected. Look there, Sancho Panza, my friend, and see those thirty or so wild giants, with whom I intend to do battle and kill each and all of them, so with their stolen booty we can begin to enrich ourselves. This is nobel, righteous warfare, for it is wonderfully useful to God to have such an evil race wiped from the face of the earth.”
“What giants?” Asked Sancho Panza.
“The ones you can see over there,” answered his master, “with the huge arms, some of which are very nearly two leagues long.”
“Now look, your grace,” said Sancho, “what you see over there aren’t giants, but windmills, and what seems to be arms are just their sails, that go around in the wind and turn the millstone.”
“Obviously,” replied Don Quijote, “you don’t know much about adventures.”

Which book, by the way, Mordecai gifted me (since it was published 34 years in the future for me). A book about adventures. Imagine that Abuela. Imagine that.