[su_row]
[su_column size=”2/3″]
Yay! With a second meeting in the books, the IA Lunch League can now be considered a thing. Again the attendees were Mason and Jim Bob, both seasoned skirmish newbs in their own right. This is the first Lunch League game to employ player created Lists using the super handy IA Army Builder. (Bonus points to Mason for winning the super awesome name contest)

The galaxy’s best sidekick facing off against the infamous bounty hunter that sold his buddy to Jabba the Hutt? Come on, could this match up be any more exciting?! Closer inspection of the two sides will reveal two very different list strategies. 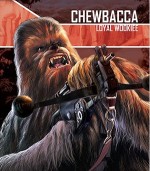 The Furious Furries are made up entirely of powerful unique figures while Fett’s Alliance consists mainly of weaker multi-unit support deployments designed to overwhelm with numbers. Each philosophy has its strengths and weaknesses and therein lies the beauty of the endless combinations one can employ in the IA Skirmish game. Clearly the highlight of this clash will be seeing Chewie and Boba Fett wreak havoc in their own unique ways. 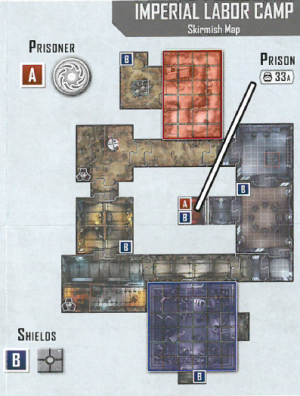 The Imperial Labor Camp map was selected at random from a list of maps neither player had played previously to provide an even playing field. The mission’s objectives were simple, infiltrate your opponent’s deployment zone with at least one figure to receive VPs at the end of the round. Of course, points are awarded on the spot for combat victories, and it’s obvious from first glance that there will definitely be some violence going down on this map.

After all the hype, this match turned out to be completely one-sided. Mason’s Furious Furries stormed out of the gate, immediately snatched up the bulk of the energy shields, and then set up in wait for the unsuspecting Imperials to come bumbling into their trap. Fett’s Alliance did not disappoint them, as Jim Bob turned in a performance of questionable tactics and general incompetence that should have earned him a good Force choking.

This match seemed to take a bit more time, most likely due to its combat heavy nature. Neither team had reached the deployment zones by the time limit, but victory was clearly in Mason’s furry hands. With Fett on the verge of being dogpiled and only a measly Stormtrooper and Officer to bail him out, Jim Bob wisely conceded the day.