We join our intrepid heroes as the open the doors to a large ballroom. Though completely empty, faint music and laughter is present. Candle light flickered as the party entered the room and began to inspect the area. Quintos, upon examining one of the large mirrors lining the room was sucked into the mirror and was now looking OUT into the room. Noticing Ghost Dancer nearby, Quintos grabbed him and smashed out a mirror. Spectral creature were slowly approaching as the party went to work attempting to smash all of the mirrors in the room to destroy whatever portal was present. Ghost Dancer summoned a large bear to assist and while the bear continued to be transported inside the mirror’s extradimensional space, it was rather effective at destroying the mirrors from both inside and out. Marcus and Lundie struggled to smash the mirrors as they averted their eyes and unfortunately wound up taking out all sources of light in the room, making their task much more difficult. As the specters grew ever closer, the party was able to destroy the last mirror and with the mirrors went the threat of the specters.

Heading out of the ballroom and down a short hallway Quintos and Lundie entered an enormous library. Ghost Dancer approached a large study table and as he investigated a large blob of spectral goo appeared, along with dozens of smaller versions of this blob around the room. Thinking quickly, Marcus summoned his Spiritual Guardians and they dispatched several of the goops quite quickly. Lundie was not as fortunate and became captivated by the Undying Heresy, loudly preaching the greatness of this undying horror. Quintos and Ghost Dancer struggled with the monster and its minions but a few lightning bolts and eldritch blasts later it was defeated. Lundie managed to free himself of the trance he was in long enough to destroy a few of the blobs before the master blob was dispatched. While entranced, Lundie melded minds with a piece of the Heresy and was able to grasp some more understanding of what exactly happened in this place and what the reality of the heroes’ situation is – now that he knows that their time here was limited, and with a renewed sense of urgency the party struck out again. By needing to escape before sundown the party had only a few short hours to find an exit. Quintos, Ghost Dancer, and Marcus noted that when they defeated some of the smaller blobs they too gained some insight as well, as if the knowledge within these beings was transferred upon their destruction. Hopefully information all that was transferred…

Taking the stairs up to the second level, the party found themselves in a landing area with three doors leading different directions. Going through the western door they snuck into a large laboratory of some kind with all sorts of ghastly and unnatural experiments going on among the tables, burners and potions. As soon as the door was opened several undead beasts began their attack. A Wight glided forward and engaged the party directly while a skeletal mage attacked with spells from a distance. The largest threat though was an Arcane Horror – a creature of immense power, corrupted to the point that death would not defeat it. Being a powerful caster caused some problems for the heroes as they were targeted mercilessly and took heavy damage before finally subduing and removing the undead from existence. Just as the final blow was landed, a deadly presence approached from an open doorway. The area beyond looked to be somewhat similar to another library though more magic seemed to be present. A lesser lich flung spells and minions at the party in an attempt to slay them and free the creatures in this compound from their curse. Battling bravely, Quintos, Ghost Dancer, Lundie, and Marcus waded in as Ghost Dancer summoned a large ape to assist in their struggle. Ironically, it was this very ape that managed to wield an enchanted (and corrupted) weapon and slay the foul beast. The party was not able to find and destroy the phylactery so this beast will return at some point in the future, hopefully long after the heroes have managed to escape. Sensing the danger and imminent threat. Lundie and Marcus lead the party into a long segmented hallway. After only a few steps into the hallway dirt and sand began pouring from the murals on the walls into the hallway, filling it and causing the party to struggle to move. Thinking quickly, the group teleported to one end of the hallway.

Realizing that they could not afford any delays, they rounded a corner and came to a giant ghoul in a giant sized blacksmith’s room. Thinking quickly the party silenced themselves and managed to sneak around without being noticed. Following suit in the next room (the armory) the party again snuck by the unsuspecting enemies and into a long hallway. Investigating and ever searching for a means to escape the heroes opened a doorway and was spotted by two Wendigos. Realizing the danger, Marcus threw down caltrops, slammed the door shut again, and the party headed down the hallway away from the room. Unfortunately they hit a dead end and had to turn around. Sprinting at full speed, the party ran back past the still closed door and through the armory again – winding up back in the landing area with the staircase. Walking themselves back through the rooms they’d already explored the group wound up back at the long hallway, now halfway filled with dirty and sand. Deciding to head the way of the unexplored side, Lundie, Ghost Dancer, Quintos, Marcus, and the ape headed down the short hallway, turned to the left and stopped, stunned. They had found the medical area of the compound…. 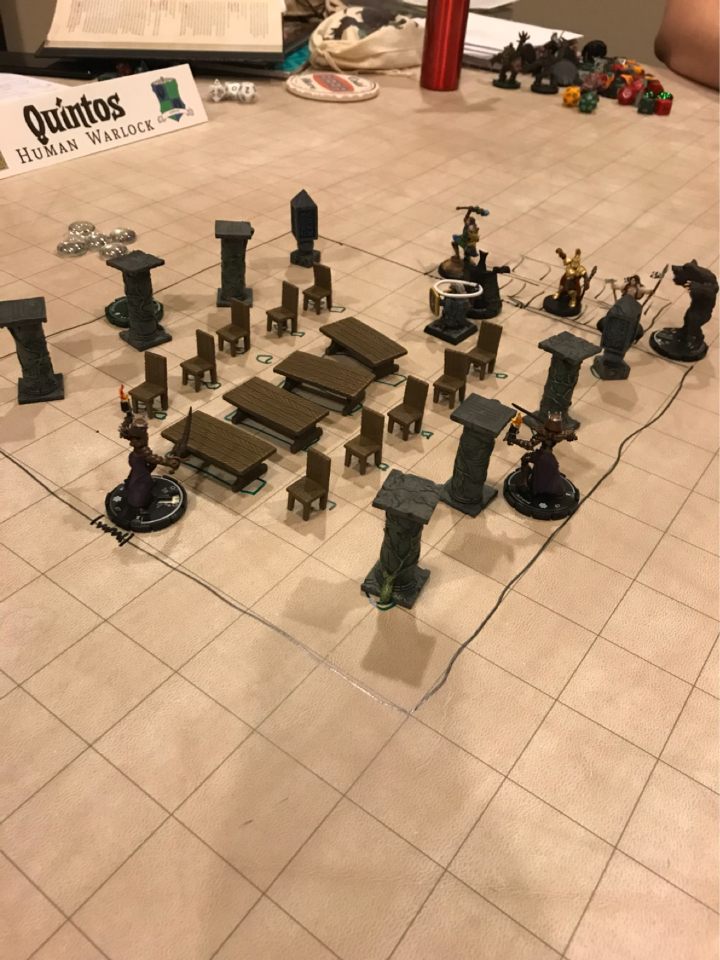 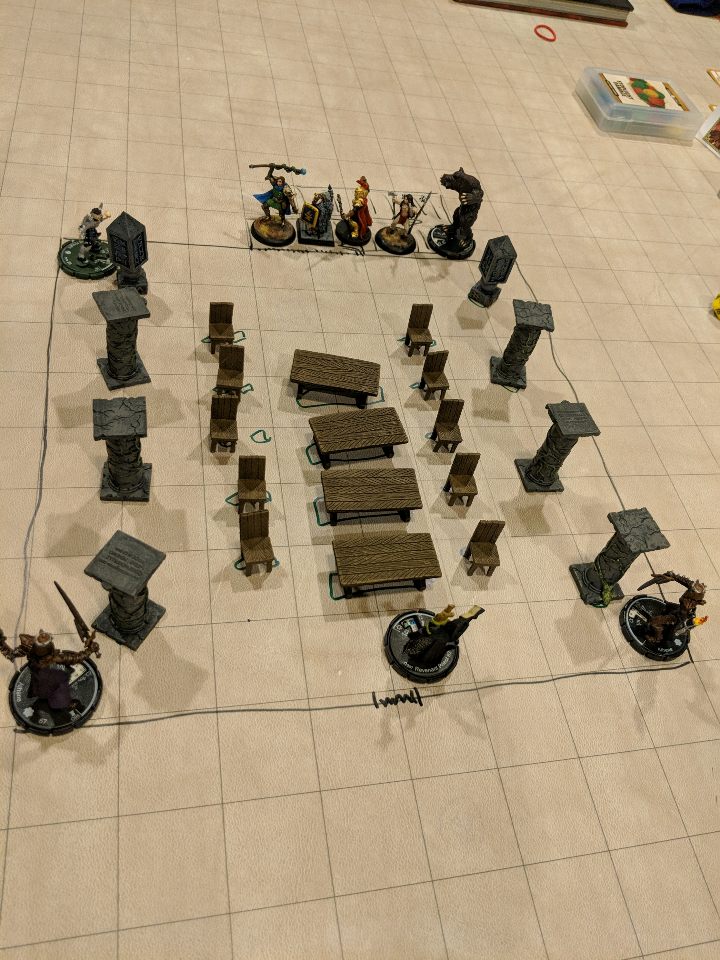 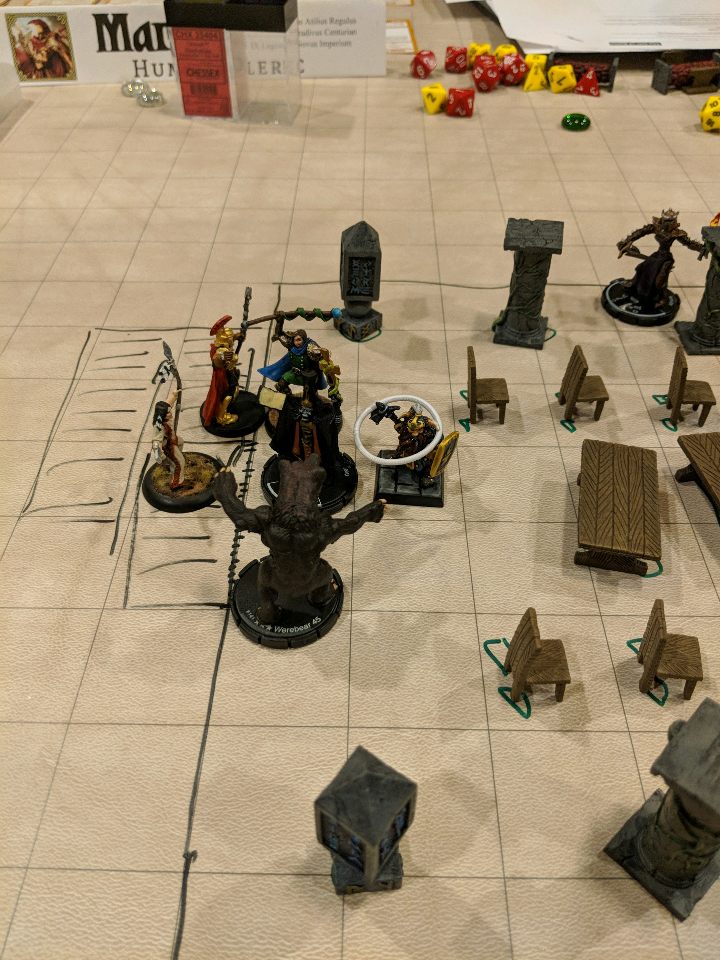 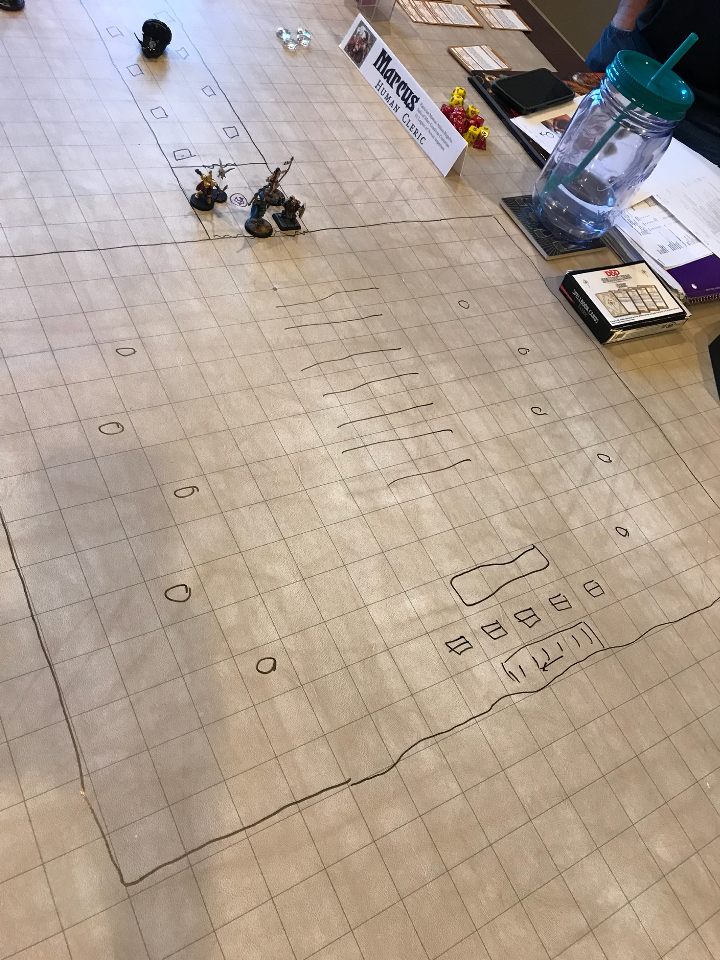 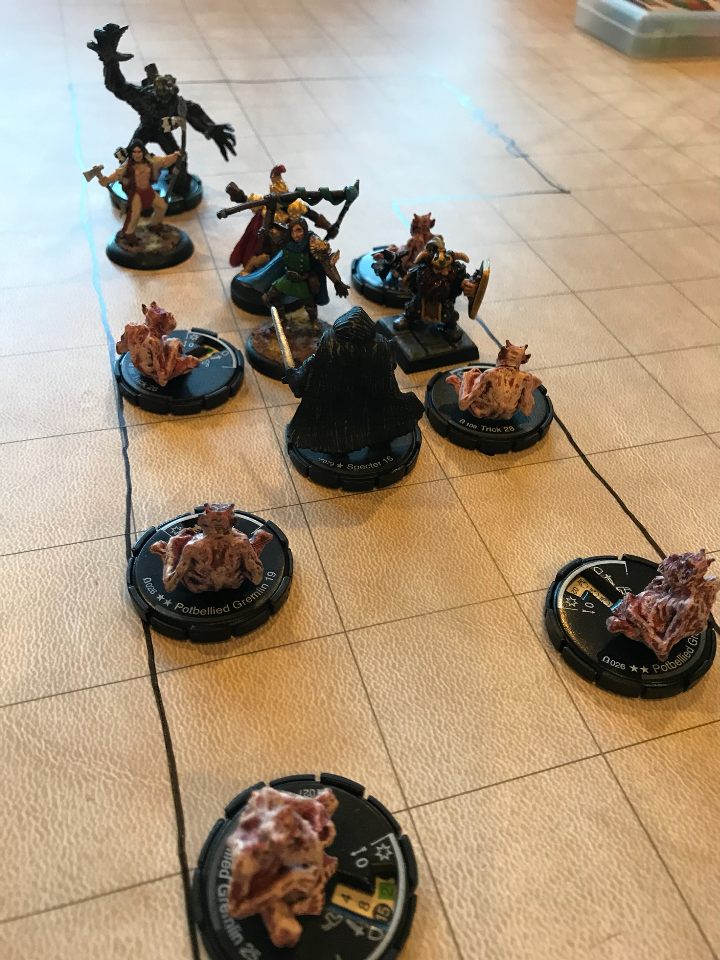 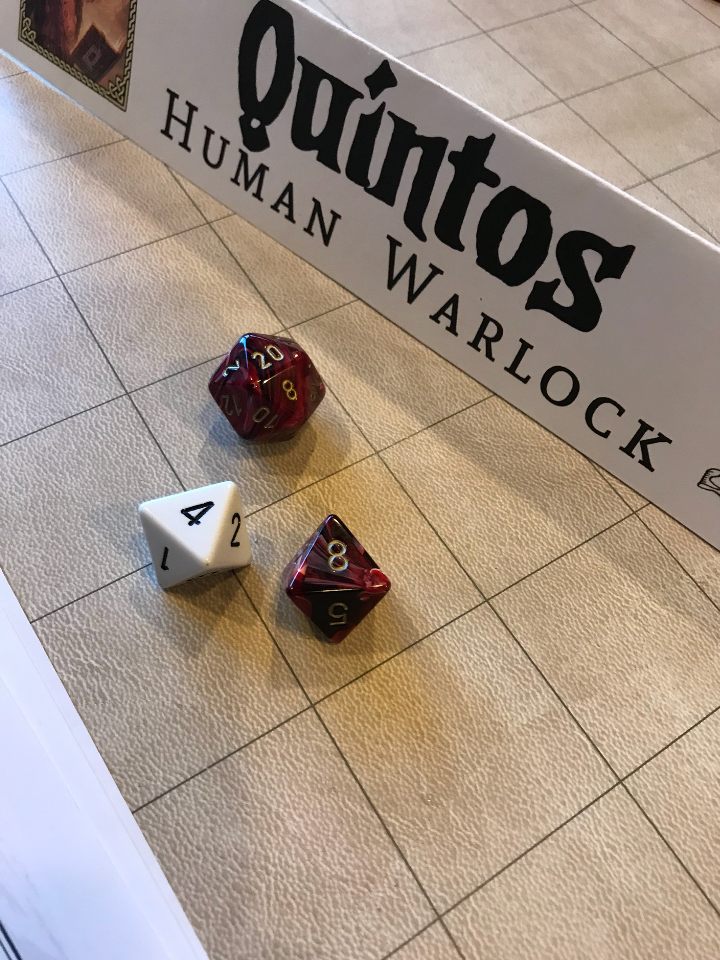 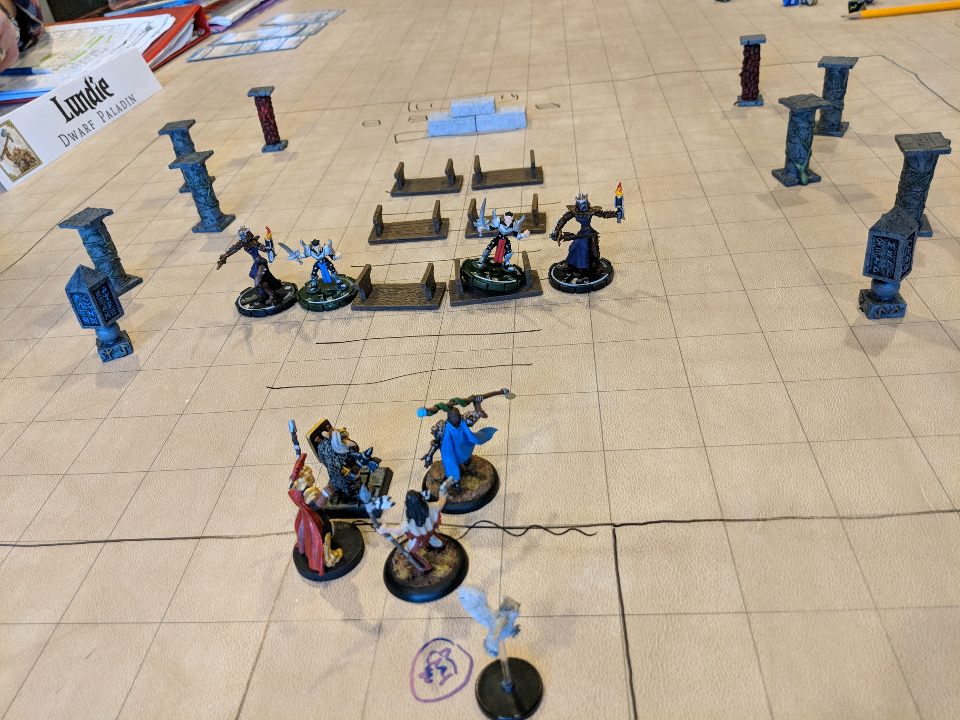 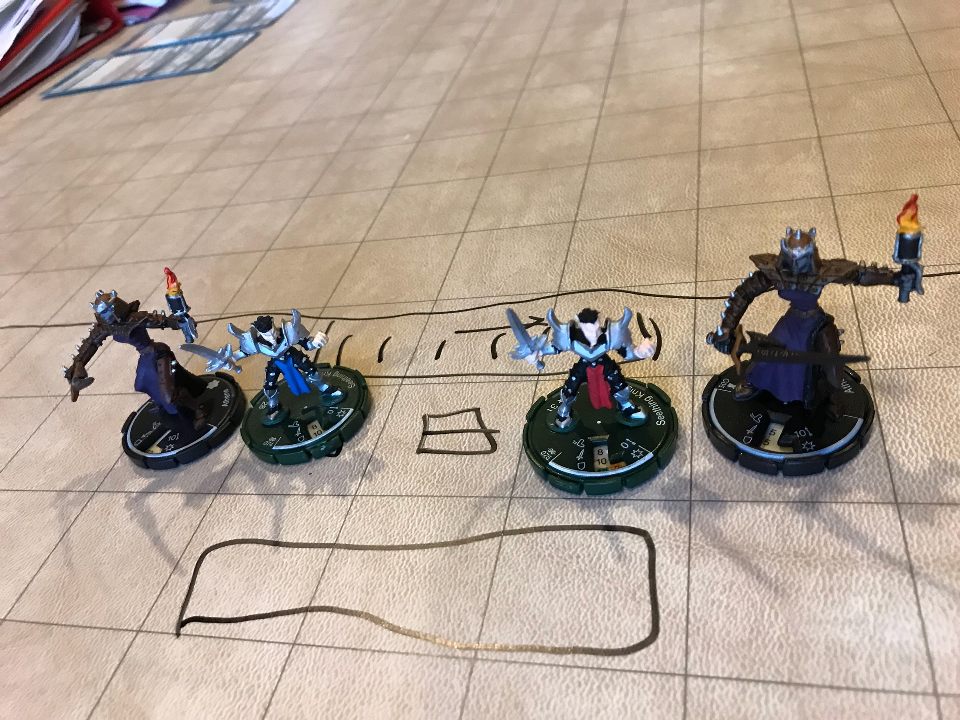