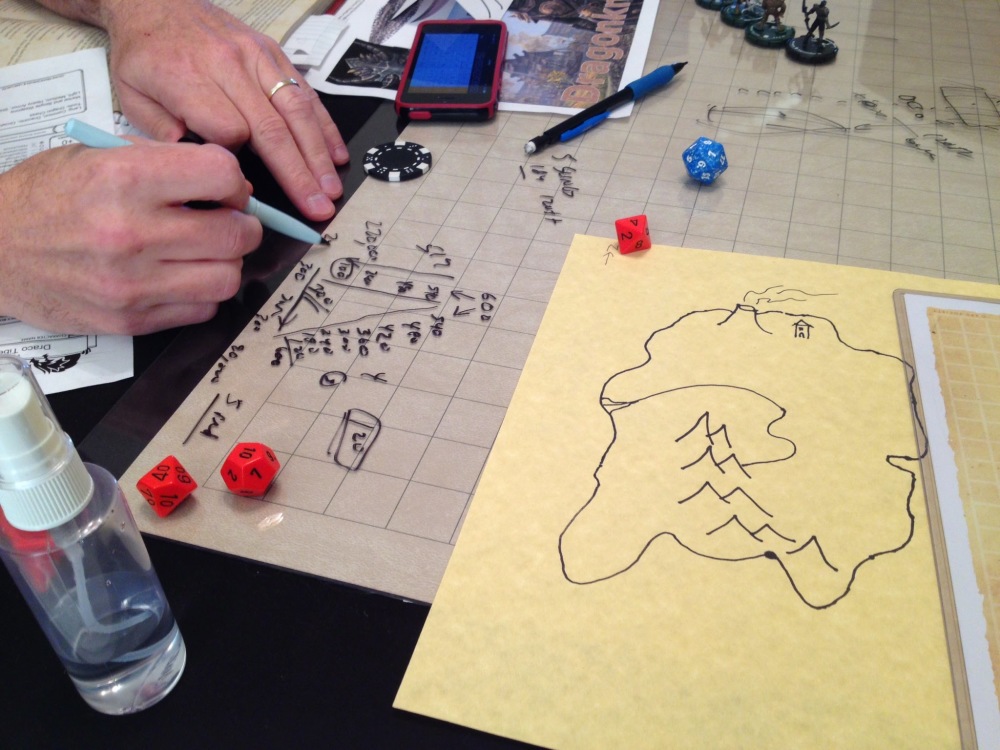 John does Trig to determine when enemy Apes in two groups will be in firing range!

On Monday, Nov. 24th, we ran a game from 1pm to about 9:45pm. A great time was had by all! The mystery of the Wheel of Time was unraveled. Players survived a shipwreck, killed a bunch of intelligent apes (though a few juveniles escaped), evaded a gargantuan T-Rex, survived the mind games of siren-like lamprey men, puzzled through a few magic relics, and saved some castaways.

Experience: Each player present received 625 XP for defeating monsters, and another 100 XP for great roleplaying.

Treasure: Each received 500 gp reward for solving the mystery. Also, you have the gold and ivory Lyre and special Glove of Loring the Lost. Neither are magical but both are historical treasures.

And, for no reason I can think of, I’m posting a great quote from the DMG (available Friday at Madness I think):

[su_quote cite=”Dungeon Master Guide” url=”http://www.enworld.org/forum/content.php?2087-The-DMG-Disclaimer-Contains-Some-Secret-Useful-Advice!#.VHYxPytdWCo#ixzz3KDAFY9CK”]Disclaimer: Wizards of the Coast does not officially endorse the following tactics, which are guaranteed to maximize your enjoyment as a Dungeon Master. First, always keep a straight face and say OK no matter how ludicrous or doomed the players’ plan of action is. Second, no matter what happens, pretend that you intended all along for everything to unfold the way it did. Third, if you’re not sure what to do next, feign illness, end the session early, and plot your next move. When all else fails, roll a bunch of dice behind your screen, study them for a moment with a look of deep concern mixed with regret, let loose a heavy sigh, and announce that Tiamat swoops from the sky and attacks.[/su_quote]