Multi-Genre RPGs and Thoughts on The Cypher System

There are a lot of setting-specific RPGs (D&D for Fantasy, Shadowrun for Cyberpunk, Traveller for Galactic Sci Fi) which are very cool. Many of the campaigns I’d like to run though are custom settings that in many cases are genre-mashups (Sci Fi Horror, Steampunk Supers, etc.). What systems currently on the market are best that support multiple genres?

Here are my thoughts (personal opinions will vary of course). For our game club, I think the systems that will work best for us are in-print, have some mechanical depth (not complex math or rules per se, but deep character options to keep players interested as they level up).  This then would exclude games like GURPs and WEG d6 (out of print) as well as Apocalypse World Systems (small community hacks but no universal system in print).

Here then are my top choices for multi-genre games :

Thoughts About the Cypher System

Here is a summary someone did on the differences between The Strange, Numenera, and The Cypher System

When it comes to comparing the three games:

Numenera – This was the first Cypher System game. It’s set in a far, far distant future where there have been many previous civilisations that have risen and gone over billions of years – some have fallen, some have moved on, some have transcended flesh in one way or another. Not all of the previous civilisations were even human. The Earth has been so thoroughly and repeatedly terraformed that the air and soil are full of nanotechnology and the place is full of the artefacts and sites of lost eras, the function of most of which is completely beyond the understanding of its current inhabitants. Unfortunately the setting doesn’t live up to the promise of that description I’ve just given. The central premise of the game is exploration and discovering the world’s wonders, but the game takes a firm line that nothing should ever be explained and things should always stay mysterious. This, unfortunately, makes the setting feel rather arbitrary and all style over substance. What little substance there is ends up being Generic Fantasy World #37, just with “ancient technology of unknowable purpose” standing in for “ancient magic”.

The Strange – The mechanics of this game are pretty much identical to those of Numenera, although the setting is very different. This is a game of parallel worlds. There’s a lot of background info about the extinct alien races and hypertechnology that caused things to be as they are, but when it comes down to it little of that is relevant to the average game, which is about exploring alternate worlds and dealing with the things that might come out of alternate worlds to threaten or invade ours. The idea is that most of these worlds are created from our fiction, so you can literally visit Middle Earth or Star Trek or Lovecraft Country or Jane Austen world – and, of course, inhabitants of those worlds can (temporarily) visit ours. Of course, the problem with fictional worlds is that they’re mostly copyrighted so the book can’t give you details about them. They get round this by having a couple of worlds that didn’t originate in fiction and most of the NPCs and organisations are related to those worlds instead of fiction-based ones. The game also has a neat mechanic where one aspect of your character (usually) changes to fit the world you’re currently in; so a scientist visiting the World of Warcraft might find that while there they have magical powers. As you can probably tell from my description, I much prefer this setting to the Numenera setting. 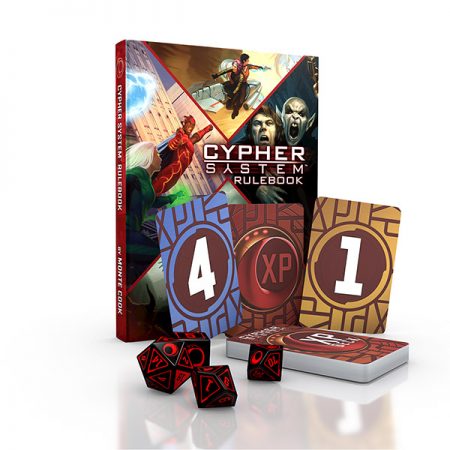 The Cypher System Rulebook – The third big product released for the Cypher System was this stand-alone rulebook. This uses the same rules as Numenera and The Strange, but presents them as a generic rule set without either of those settings. They actually have more options than either of the previous products, so I prefer to play in the setting of The Strange but using the rules from this book. Although this book doesn’t have a specific setting, it contains rules for adapting the Cypher System to a variety of genres; including horror, fantasy, sci-fi, and even superheroes. I’ve not tried the superhero options, but I’m told they work quite well for a particular level of superhero power. If you were only going to get one of the three books, I’d advise getting this one.

I have yet to play it, and I’ve been turned off by their restrictive licensing (I’m a publisher) and costs (would my players buy $60 rulebooks?), but Jeff is running a mini-campaign which I’m unbelievably excited to try out. If it plays well and can be GM’d by mere mortals, I could see it fitting a great niche for some campaigns our game club wants to run!

And of course, I’m going to come out with my own multi-genre RPG at some point, but that won’t be robust and in-print until next year.